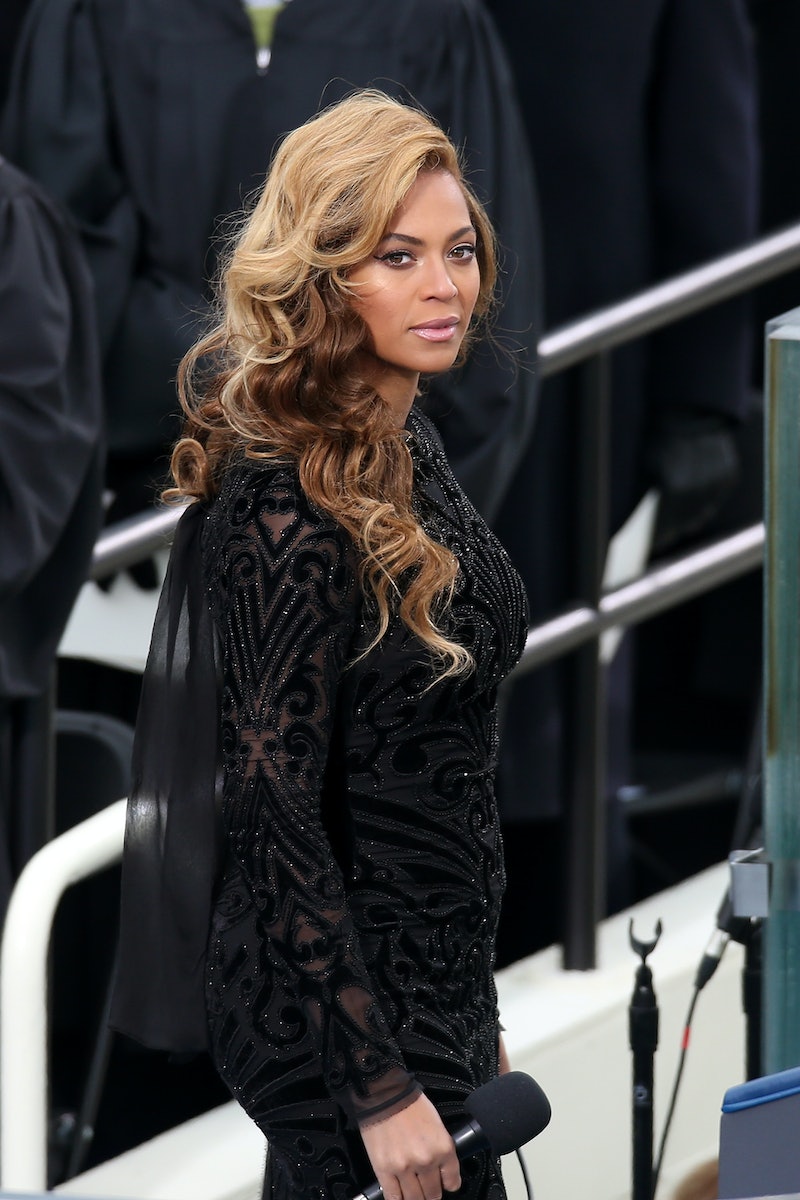 All eyes on her, the question of Beyoncé's Halloween costume has been answered: "Rhythm Nation" era Janet Jackson. Though she hasn't posted any selfies yet, Bey was spotted and her picture was snapped at an event in New York on Thursday wearing a very recognizable look. The all black outfit, key earring, and baseball cap from Jackson's iconic album cover and music video are all there, and it's a pretty amazing costume, one pop star paying tribute to a key influence. Additionally, Jay and Bey dressed Blue Ivy in a Michael Jackson costume, complete with microphone, single white glove, and sunglasses. Unless his costume is very subtle, Jay Z, who was photographed carrying Blue, didn't participate in the family tribute.

Why did the Knowles-Carter family choose to channel the Jacksons? Beyoncé is a big fan of the family, frequently professing her love for Janet. The '80s pop star paved the way for female artists, winning lots of awards for the iconic album Rhythm Nation 1814, including becoming the first woman to be nominated for a Producer of the Year award. The album itself featured a large amount of lyrics centered around political and racial issues, and the video for the song "Rhythm Nation" is, of course, amazing. It's a tribute that makes sense for the increasingly political Beyoncé, and of course, it's a very fashion forward costume choice as well.

The costume might also serve as a music history lesson to Bey's many young fans, who might only remember Jackson as Michael's sister or as the woman who did the "bad" thing at the Super Bowl. And the scandals surrounding the Jackson family have prompted some comments, especially regarding Blue Ivy's costume. Though channelling Jackson's later years would have been a definite faux pas, the tribute to the performing Michael Jackson is adorable. On the fifth anniversary of his death, Beyoncé wrote that "Michael Jackson changed me, and helped me to become the artist I am." Jay Z, who worked with MJ on a remix, has called him a genius. It's an incredibly fitting tribute, one musical family to another.

Will Beyoncé and Blue have different costumes during the rest of the weekend? Will Jay Z ever participate in the fun? All that Bey has posted so far on Halloween is another homage, this time to a picture of her and Jay Z from a couple weeks ago. It's absolutely adorable, and prompted Bey to be unusually emotive in her caption.