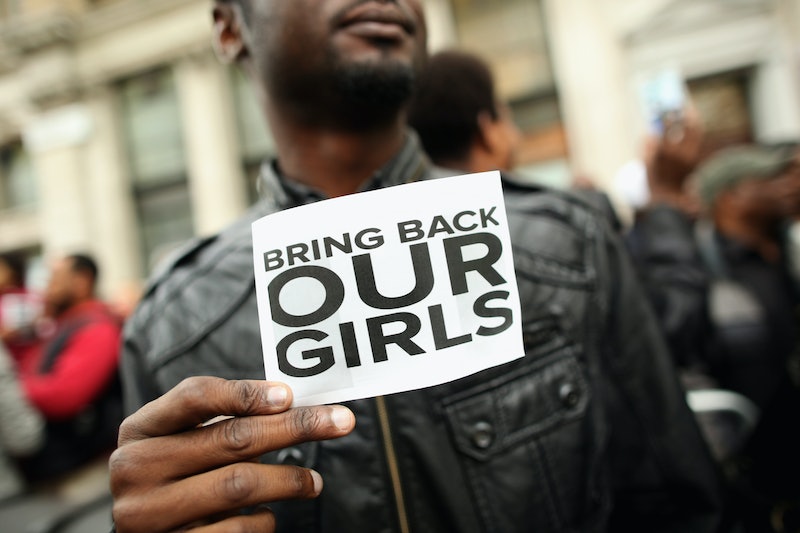 According to a creepy, disturbing message by Boko Haram's purported leader, Abubakar Shekau, the kidnapped Nigerian schoolgirls have now been "married off," and are living as Muslim converts in their "marital homes." The sad news comes only two weeks after the Nigerian government claimed a ceasefire had been brokered with Boko Haram, promising that all 219 Chibok girls would finally be freed. According to Shekau? That whole ceasefire talk was a lie.

On the night of April 14, about 300 girls were kidnapped from the Government Secondary School in Chibok by the now-infamous terrorist organization, Boko Haram (which, roughly translated, means “Western education is forbidden”). At the time, Shekau, the group's leader had said that the girls weren't allowed to be in school: ”God instructed me to sell them, they are his properties and I will carry out his instructions,” he'd said.

He seems to have followed through on his promise. In a video obtained by the AFP Friday, Shekau, laughing sinisterly, said to forget about the girls. "The issue of the girls is long forgotten because I have long ago married them off.In this war, there is no going back." He added:

Don't you know the over 200 Chibok schoolgirls have converted to Islam? They have now memorized two chapters of the Koran. We have married them off. They are in their marital homes."

The disturbing announcement comes only two weeks after Nigerian officials claimed they'd made a deal with Boko Haram securing the release of the Chibok girls — at the time, the news had been met with a fair dose of skepticism (not least because no one recognized Boko Haram's so-called representative) and many were wary of being hopeful before seeing the girls themselves.

As it turns out, they were right to be suspicious: more kidnappings and acts of violence, including a bombing that left eight dead in Gombe on Friday, have continued unhindered. And Shekau (who, by the way, the Nigerian government claims to have killed last summer), said that there'd been no negotiations, no ceasefire, no nothing. Said Shekau in the video obtained by the AFP:

Why would the Nigerian government have claimed the girls were about to be freed if they weren't? Well, it might have had to do with President Goodluck Jonathan's upcoming campaign: on Thursday, he officially announced his candidacy for the Feb. 14, 2015 elections, and bringing those girls back would no doubt up his chances in the ballots.