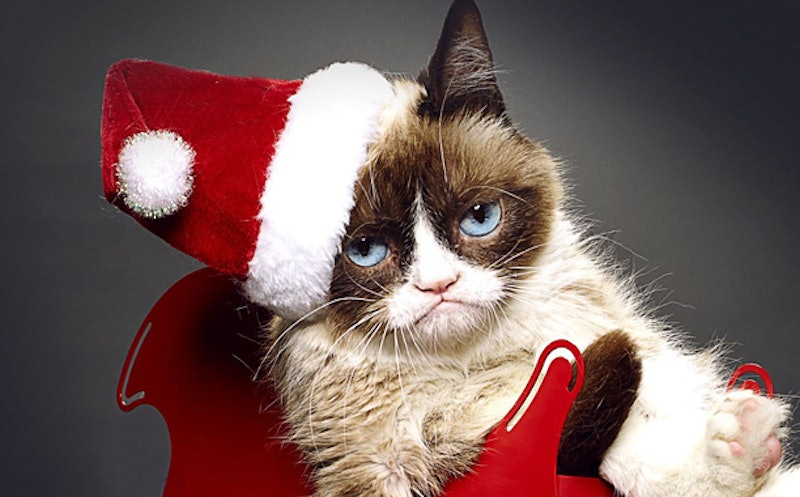 It's what we've all been waiting for. Aubrey Plaza as Grumpy Cat is finally here in the official trailer for Grumpy Cat's Worst Christmas Ever — and, unsurprisingly, the movie looks totally hilarious. Lifetime movies are always hit and miss; sometimes they're downright awful and sometimes they're pretty decent. But, trust me: The Grumpy Cat movie looks better than decent.

Lifetime's first success was getting Parks and Rec 's perpetual grump April Ludgate to voice the cat. Originally Jane Lynch was supposed to play the Internet sensation, but dropped out not long ago. After watching the trailer, though, it's clear that Plaza was the best choice — she basically is Grumpy Cat and I'll definitely imagine the feline talking like her forever now.

The second triumph was the fact that Lifetime let Aubrey Plaza make some pretty meta jokes about the network it's airing on. "Don't get sappy on me!" her character decries. "Wait, I forgot. It's a Lifetime movie." Any movie that's willing to make fun of their channel is an instant winner in my mind.

Plus, having a cat who is really grumpy about such a jolly holiday is just plain funny. "This is the best Christmas ever!" a tiny blonde child announces. "Go ahead and ignore the title of my move," Grumpy Cat says in an annoyed tone.

After watching the preview I can honestly say nothing goes together quite so well as grumpy felines and Christmas. It's going to be perfect. Or should I say, purrrfect?

Watch the trailer below and get excited for the Nov. 29 premiere.