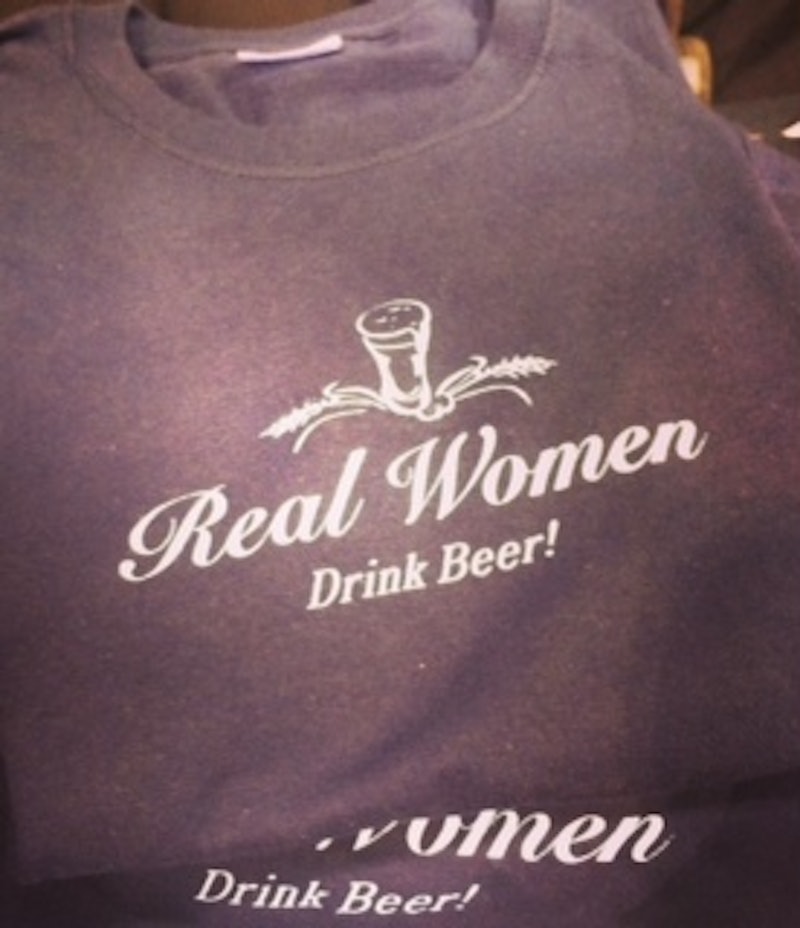 Once again, the New York City Craft Beer Festival served up good times to more than 2,500 beer enthusiasts during its Autumn Harvest last weekend in Manhattan's Lexington Armory. Showcasing 150 beers from 75 all-American craft breweries, the quarterly event encouraged attendees to toast to the Oktoberfest spirit, raising glasses of stouts, lagers, IPAs, ales, and pilsners represented by some of the finest brewers including Kona, Ommegang, Abita, Flying Dog, Smuttynose, and Sixpoint (just to name a few favorites).

As a long time IPA lover cursed with a Scandinavian liver of steel, I've always prided myself on being the girl who could hang with the boys — because it seems like it's always been exactly that — slinging beers with groups of guys. Having previously mastered the art of navigating and recounting all memories of a three and a half hour beer binge during the summer beer fest, I decided to approach the Autumn Harvest from a different angle: I wanted to know how well women were represented (or misrepresented) within, what I assumed to be, the male dominated craft beer industry.

Boy was I wrong. While walking from vendor to vendor, asking female volunteers and employees about their "experiences" as a woman in a male dominated industry, to my surprise I heard a lot of, "Actually, women are well represented here," and, "The female/male ratio is about 50/50. Last year, I'd say we even outnumbered the men 60/40." While I was stoked to hear that misogyny has no place in the well-oiled machine that is the craft beer industry, I quickly realized that my pitch needed some serious recalibration.

And that's when a Sixpoint employee kindly pointed out that not only are women well represented at craft beer fests, we're infiltrating the industry from all angles — from distributors to bars, retail, the blogosphere, and breweries. In fact, women make up 37 percent of craft beer drinkers, according to recent numbers, and their presence behind the scenes is just as important when it comes to expanding business for smaller breweries.

Enter Heather McReynolds, Brewing Manager for Brooklyn's own Sixpoint Brewery. I had the pleasure of interviewing Heather, picking her brain of all things female and fine beer as she gracefully debunked a few gender-specific craft beer myths floating around in my head.

What were you doing before you joined Sixpoint?

I began working for Sixpoint two years ago, and prior to that I was the Head Brewer at a small brewpub in Georgia. Before the Georgia gig, I managed a beer bar in Florida, in my hometown of Gainesville. I've been working in the craft beer industry in some form or another for all of my post-collegiate life, and I'm pretty proud of that.

How do you think women are perceived in the craft beer industry?

In my experience, women aren't perceived any differently than anyone else in this industry. All that matters in this industry is if you can do the job. The beer speaks for itself.

Several female volunteers and employees of the NYC Craft Beer Fest mentioned that the male to female ratio is about 50/50. When do you think women started becoming more involved in the craft beer industry? And why?

I think that a ratio of craft beer drinkers would be about 50/50. In my opinion, women are still a bit in the minority in industry employment, but other non-white races and gays and lesbians are even less represented. I think women started getting involved in the industry after they began to realize how tasty craft beer is. Straight white guys were the early craft beer adaptors, and that's why you see them so often in craft beer.

As a side note, it's only been since the 1500s or so that gender roles in the beer industry were flipped. Before then, beer was made at home and not mass-produced, and it fell under the umbrella of women's duties and was only made by women. This was common place since, oh, human civilization began.

Do you ever feel insecurities being a female in this industry?

The only time I feel insecure is when I can't reach something up high (I'm five feet tall). But then I make accommodations or get a co-worker to grab it for me. And then I'm redeemed when they can't crawl into a small space to get to something, and I do it for them. If I felt insecure about my job or the beer I was making, then I wouldn't be doing it.

What beers are stocked in your fridge right now?

I actually don't drink too much at home, since I consider beer drinking a social activity and prefer to drink in public with others. I've got a few rarities and special beers that I'm hanging on to for special occasions — a 2004 Sierra Nevada Bigfoot, and an Adnams Tally-Ho are among them.

What does success mean to you?

I think any brewer would tell you the same thing — success is consistently producing excellent beers that are well received by the public, and hopefully win a few awards.

I'm happy to see women making their mark in the craft beer industry, and more importantly, I'm honored to play a small role in helping erase the misconception that the craft beer market is yet another male dominated arena. Because at the end of the day, Heather's right; your work ethic is what matters most, resulting in a product all people — no matter what their gender — can enjoy. But as enlightening as it was to learn that the playing field is much more even than anticipated, I can't help but think, why did it take me 30 years, two festivals, and an entire interview to understand this? Much like politics, the hard sciences, and comedy, there's a reason people think the craft beer industry is a boys club. And that reason is, we're not talking about it enough, or giving women credit where credit is due. But that's all starting to change.

To learn more about the female movers and shakers in the craft beer industry, check out The Pink Boots Society; the Portland-based international nonprofit dedicated to empowering women beer professionals to advance their careers in the beer industry through education. And while you're waiting for the NYC Craft Beer Winter Harvest Fest tickets to go on sale, check out upcoming Sixpoint events hosted nationwide where you'll be sure to find a plethora of rotating seasonal beers brewed, distributed, marketed, sampled, and critiqued... by women.

More like this
25 Inspiring Quotes From Black Women To Celebrate Black History Month
By Kyli Rodriguez-Cayro and JR Thorpe
24 History-Making Black Women You Probably Didn't Learn About In School
By Ayana Lage and JR Thorpe
Learning To Love, Not Judge, The Lunchbox Wives Of TikTok
By Esther Zuckerman
These Artists Are Reimagining Black History Month To Create A Better Future
By Katie Mitchell
Get Even More From Bustle — Sign Up For The Newsletter
From hair trends to relationship advice, our daily newsletter has everything you need to sound like a person who’s on TikTok, even if you aren’t.