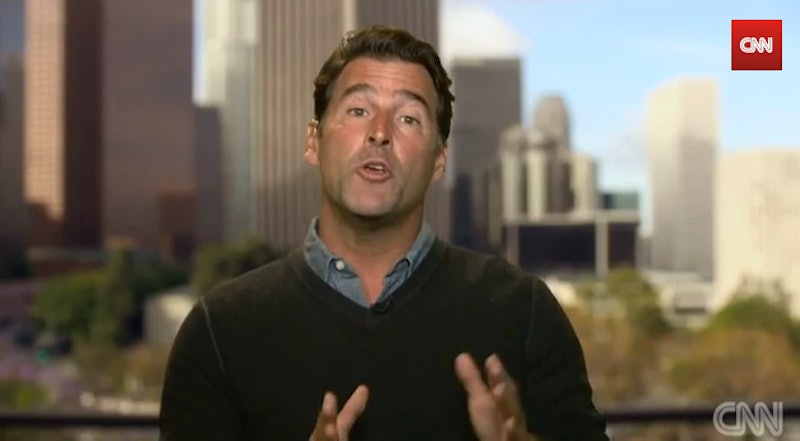 For the past several days there's been a conversation happening, both in the mainstream and on social media, about street harassment. What is street harassment? Odds are you've seen it happen, or have experienced it yourself — a woman walking down the street is assailed with unwanted (and therefore profoundly intimidating) comments about her body, justified under the guise of "just making a compliment." Well, cable news viewers got a great example of how not to talk about street harassment Sunday — CNN guest Steve Santagati mansplained street harassment to host Fredericka Whitfield and guest Amanda Seales, and suffice it to say they weren't havin' it.

The source of all the recent brouhaha — beyond the awful everyday reality of street harassment, faced by countless women — was the recent release of a video which followed actress Shosanna Roberts through the streets of New York City, as men repeatedly called out to her. The video spurred a lot of discussion, and got a number of high-profile men saying some pretty dumb things — SNL's Michael Che, for example, as well a grossly sexist "joke" from Fox News' Bob Beckel, parroting the language of street harassers everywhere.

But as far as dismal responses on cable news go, this effort from Santagati, author of something called The Manual (emphasis mine) easily takes the cake. After Seales described her own experiences with street harassment, and challenged that Santagati was "not an expert" on this issue, he let loose with a mansplaining for the ages.

I'm more of an expert than you, and I'll tell you why. I'm a guy, and I know how women think! More than you guys will ever know. I can't get in a woman's head, anymore than just thinking about it, but I'm a guy and I know why these guys do this. The bottom line is this, ladies: You would not care if all these guys were hot. They would be bolstering your self-esteem, bolstering your ego, there is nothing more that a woman likes to hear than how pretty she is.

Frankly, while undeniably angering, the video is worth the watch if only for the shocked, bewildered expressions on Whitfield and Searles' faces, seemingly taken aback by such an overt display of chauvinist pig-headedness. Of course, CNN isn't blameless in all this — they probably had a pretty good idea that bringing Santagati on was going to result in exactly this kind of exchange — but all the same, there's no harm in taking a moment, as a nation, to think "wow, that's pretty bad."

Underlying an awful lot of the criticism that's been directed at the video, at least that I've seen, is the notion that what so many women feel very real fear about is nothing more than friendly greetings. "What," the thinking goes, "I can't even say hi to women on the street anymore!?" There's an odd, persecuted sort of intensity to it, as though politely keeping to oneself is some sort of social impossibility. And Santagati's efforts to give voice to this proved equal parts laughable and juvenile.

Santagati went on to suggest that if women were really so afraid walking the streets — remember, we live in a country in which rape is both gallingly common and tragically underreported — they should simply start carrying guns.

By the end of it all, there were really left two things left pretty clear: Seales is an incredibly patient person under trying circumstances, and this might have been a worthwhile conversation about street harassment — given a less boorish, more serious man on the panel. Sadly, however, it just wasn't to be.