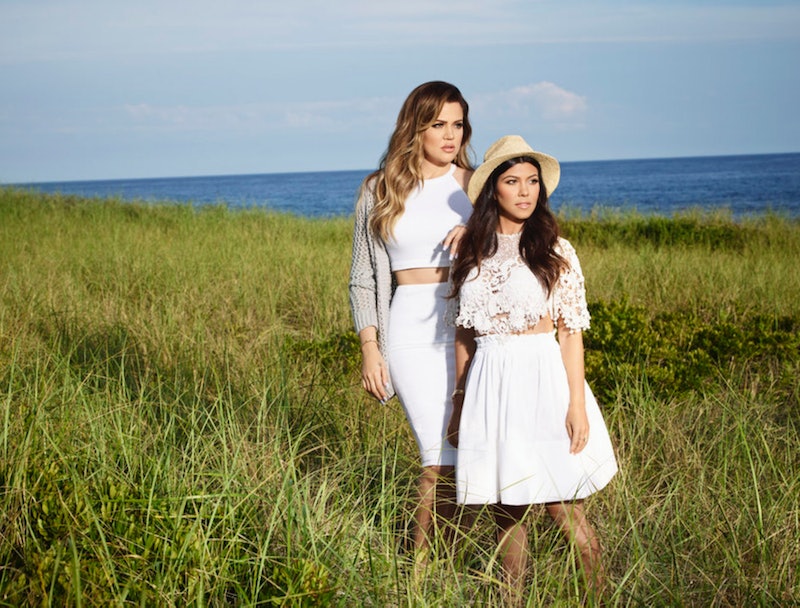 In Sunday night’s highly anticipated premiere of Kourtney and Khloe Take the Hamptons , five members of Calabasas' royal family descend upon the quiet East Coast beach community in a black SUV with dreams of a restorative summer in their hearts. Well, that’s Kourtney’s dream, at least. She's all about chillaxing around the chillaxing town that is the Hamptons. Khloe, on the other hand, wants to party. And by “party” I don’t mean “play croquet in the backyard.” (But I gotta be honest, that looked like something I could get into.) Khloe wants to jet set. And then there’s Scott. Oh, Scott. Scott’s having a rough go of it. He wants to escape to Manhattan the second he, Kourt, Khloe, Mason, and Penelope pull up to their gorgeous vacation house. Yeah, he wants to go into the city to party at club appearances and rake in that cheddar, but on a deeper level, the Hamptons stir up too many memories of his recently deceased parents and throughout the episode, Scott discusses the anxiety this is all causing.

No, that's not me playing armchair psychologist. I'm simply recounting what he says. Scott's straightforward about what he's going through. No room for a "WHAT'S UP WITH LORD DISICK?" mystery.

If anyone tries to tell me that the conversation he and Kourtney have while they drive to the beach is a “bullshidoobie reality show moment,” I will suck my teeth at that person. Because watching Scott get choked up as he reminisces about his dad feels like one of the more raw moments that's ever been in any of the Kardashian reality programs. ("HOW HARD COULD THAT BE?" asks the aforementioned hypothetical naysayer. Don't mind me as I suck my teeth again.) Dude is going through it and I will not stand for anyone saying he's faking his grief for the cameras.

And the heartache of losing his parents isn't working alone; Scott's dealin' with the gnarly duo of grief and anxiety. In a heart-to-heart with Khloe about how neither of them want to be in the Hampitty-Hamps, Scott says he has anxiety about basically everything in his life.

Scott is straight up and real (once again, I won't have any "it's bullshidoobie reality TV" snark) about it, and that's incredibly admirable. He doesn't attempt to kick it under the rug with a Lord Disick slipper, which is something he totally could've done. He could've mentioned it casually, crossed his eyes, picked up a crayon, drew a picture of male genitalia on a piece of construction paper, laughed about it with Khloe, and said he feels better after expressing himself artistically. Classic Disick move! Such a hooligan! Cut to commercial!

Ugh, poor Scott. Poor Kourtney. Poor everyone. This family means a lot to me, OK? I'm rooting for all of them. I am who I am.