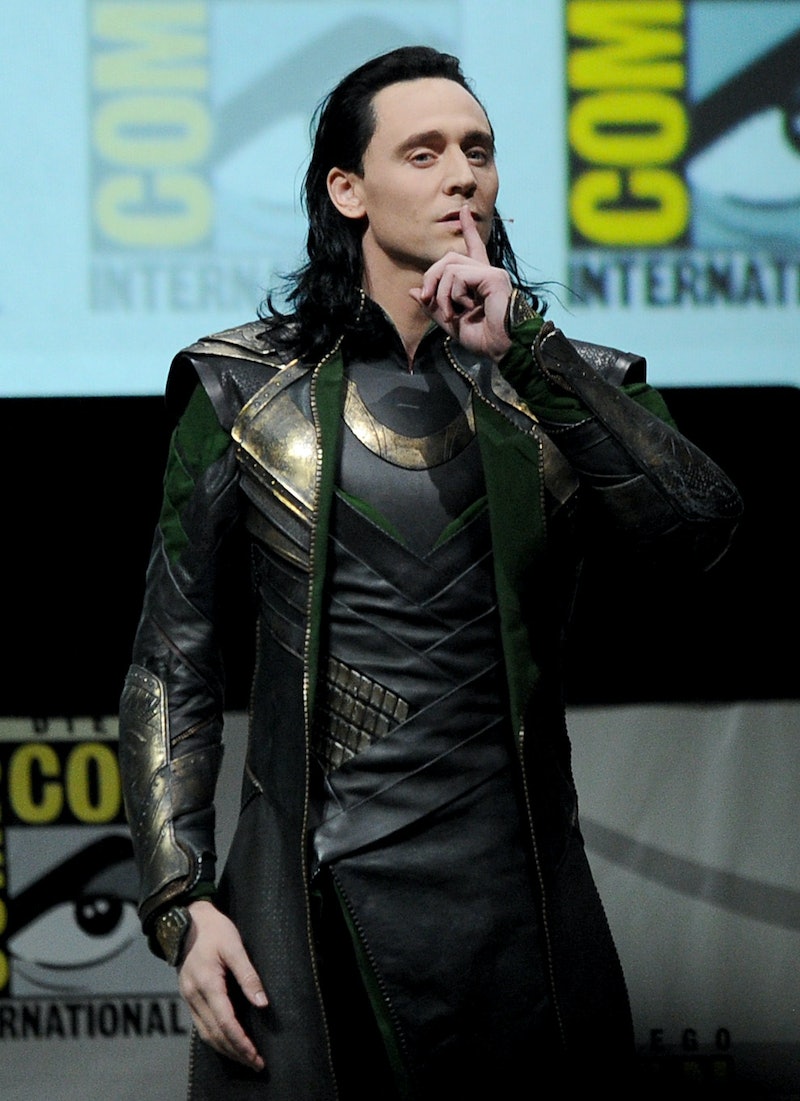 Remember that time we were all wondering whether or not we should bother to buy a ticket to see Avengers: Age of Ultron because Loki wouldn't be in it? Don't lie. We've all been Loki'd and never has it felt so good. Waiting until 2017 to get to see Tom Hiddleston's face on our film screens as Loki again is the kind of torture that should be ruled inhumane, okay? However, it appears that once we get our Loki back then we'll be keeping him for good. Apparently, Hiddleston's Loki will appear in all three Avengers films after all. Yes, that includes Age of Ultron. Those liars!

The leak came from Idris Elba, who plays Heimdall in the Thor film series and who was in the scene that Hiddleston was filming for Age of Ultron. "I'm in Avengers," Elba said to the Telegraph, possibly having to shout over the sound of a thousand and one Marvel executives crying and clutching their pearls at this high-profile slip-up. "And I'm doing a scene with Chris Hemsworth and Tom Hiddleston, and they're like, 'Aren't you [supposed to be] in Ibiza [on vacation]?'" All I'm saying is, considering Hiddleston denied a year ago that he would be in the next Avengers film and Marvel has already had to deal with the Age of Ultron trailer leaking a week early, Elba's casual admission that everything we know about Loki and the MCU is a lie must be causing a waterfall of tears to run over at Marvel.

There were already practically confirmed rumors that Hiddleston and Loki would have a key role to play in Avengers 3 (now titled The Avengers: Infinity War), but the fact that no one had thought to deny the former statement that Loki would not be in Age of Ultron leads me to believe that the secret post-credits scene that we can expect from this movie is the one that Elba, Hemsworth, and Hiddleston were filming. In addition to setting up for Captain America: Civil War, the next Avengers film to come out after Age of Ultron will be Thor: Ragnarok. That means that elements from Ultron will have to be incorporated in Ragnarok, just like elements from the Avengers made up the foundation of Thor: The Dark World.

Plus, Hiddleston and Elba filming the post-credits scene would help Hiddleston avoid being called a giant liar as well. After all, the post-credits scene comes after the movie, which means that he was still correct in saying that he wouldn't be in the Age of Ultron. It would have been more accurate for him to say that he'd appear directly AFTER the Age of Ultron. Or, perhaps, in an effort to maintain secrecy, Marvel didn't tell him they needed him to film a scene until they were due to actually film it. Of course, that secrecy is dead in the water now, but this is a benefit to my life and so I can't find it in me to feel bad for them.

As for what Heimdall, Loki, and Thor are talking about that couldn't wait until Ragnarok, I suppose we won't know until we watch the film for ourselves and stay until the end of the credits. All I know is, they could be talking about flower arrangements and china patterns for all I care. For Loki to be present is for Thor to find out that Loki is actually alive — or, alternatively, Loki has moved from impersonating Odin to impersonating Heimdall — and I've been waiting for that moment since the end of Thor: The Dark World. The Marvel Cinematic Universe is nothing with Loki's tricks and I'm glad we won't have to miss out on them in another Avengers movie.