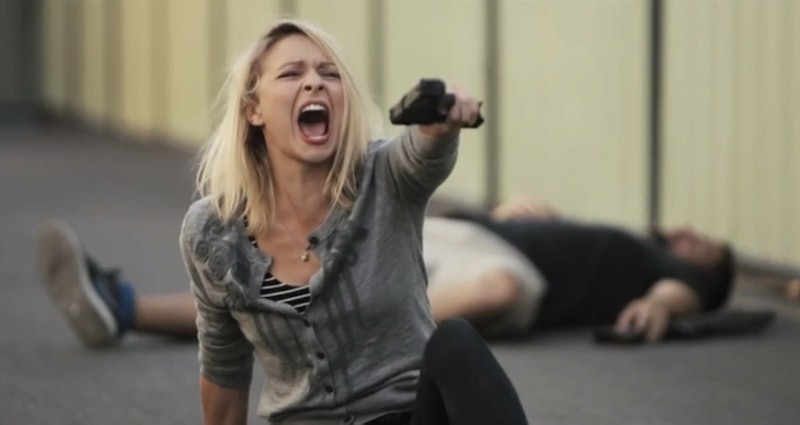 Are you still trying to cope with the end of Daylight Saving Time? Don’t panic — watch Nacho Punch’s “Daylight Saving” video. Taking the guise of a fakmovie trailer, it depicts DST as the nightmare it really is — even if the movie in question, Saving Daylight, doesn’t actually exist. It’ll also give you a hearty laugh, and in this case, laughter actually might be the best medicine.

Nacho Punch is no stranger to hilarious pop culture parodies; remember that “Learn to Speak Dothraki” spin on those old Muzzy foreign language courses? That was Nacho Punch. So was the Pokemon pickup lines video, and the “A Porno by Wes Anderson” one. This one, though? It might be my favorite one so far. Part horror movie and part sci-fi thriller, it puts an apocalyptic disaster-style spin on the idea of arbitrarily gaining and losing time. To be honest, I actually don’t mind the end of DST; as far as I’m concerned, gaining an hour can only be a good thing. I mean, hey: More time to sleep, and more time to do stuff during the day? Rock on. “Springing ahead” kind of sucks, though — and either way, it does always throw you for a loop if you’re not expecting it to happen. Or even when you are expecting it to happen.

Maybe you get to the office… only to find it totally empty:

Or you arrive at the store to do a little shopping… to find it mysteriously closed:

Or you emerge from your car… into an unexpected pocket of darkness:

But no matter how you discover it, it can only mean one thing:

The scientists and government officials can’t make sense of it:

And it has a nasty habit of tearing us apart:

We can only survive if we figure out that the thing that really needs saving... is ourselves:

The whole is well worth watching, so check it out below — and don’t worry. DST isn’t that bad. We’ll get through it, as long as we stick together — and accurately refer to DST as "Daylight Saving Time," not "Daylight Savings Time." TIL it's singular, not plural. Who knew?