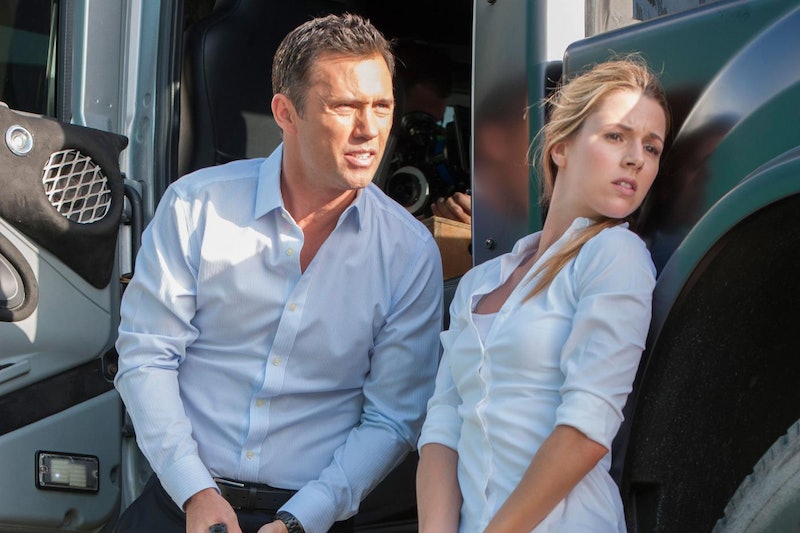 To review: ish got seriously real in the last episode of Burn Notice. Michael Westen spilled his secrets to James and Sonya, outing himself as a double agent for the CIA. Also, things were murdery.

James, sensing Mike's genuine investment in his cause, isn't about to bring out the firing squad. And for perhaps the first time this season, Michael's in a position where he can be completely honest. He tells James that the CIA's after him and him alone, that the lives of his friends are at stake, and that he was honestly moved by the ideology of the organization. And James is willing to cooperate—on the condition that Mike tell a very particular story to the agency. He's to report back to his senior officer with the news that he only barely escaped with his cover intact. Westen agrees.

Back at CIA headquarters, Mike pretends that everything's normal, but the director is far from impressed with his lackluster results. He's ready to call off the operation entirely, but begrudgingly grants Westen another 48 hours to complete it.

Mike refuses to accept any help from his friends, but Fi won't take no for an answer. She embeds a tracking device in his gun. Sam and Jesse tail Mike, and—unbeknownst to him—witness evidence of his deception firsthand: a secret meeting with James. Ugh. Right in the feels.

James announces to Mike and Sonya that the only solution is to turn himself in. Mike will be a hero, the organization will be able to carry on its work unimpeded, and Westen and Sonya will be free to have as much illicit spy sex as they want. James seems remarkably sincere. Could this be for real, or is Kendrick simply playing us?

When Fi tells Madeline the bad news, she's totally beside herself. For a while, they stand around looking teary-eyed and speaking in hushed voices. Meanwhile, the house continues to be surveilled by James' menacing henchmen. What are they going to do? Classic Fi: They burn down the house, and escape with Charlie in the ensuing chaos.

The news of the fire reaches Mike when his plan to coordinate James' capture with the CIA is already in motion. He immediately calls Sam, who tricks him into a meeting with himself and Fi—a "meeting" that'll end in Mike's friends abducting him for his own safety.

But Mike catches on. The two men end up brawling their way over a highway guard rail and into the water below—and continue to fight beneath the surface. Westen escapes, rendezvousing with Sonya at the building where James is due to arrive via helicopter.

But Sam, Jesse and Fionna follow him. As the men detain a guard, his one true lady-love confronts Mike on the roof. It's only when Sonya holds Fi at gunpoint that Mike for the first time seems appropriately dizzied by the absurdity of his situation. WHAT IS HE GON DO. Cue a gunshot, and the worst "To Be Continued..." ever.

I can't decide if I'm more excited or depressed that we're just one week away from the series finale.