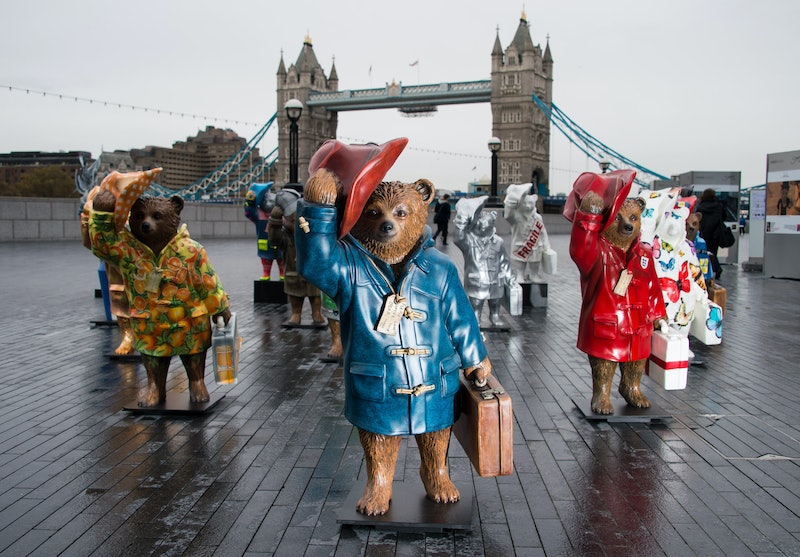 London is being taken over. On November 4, Londoners and book-loving children should keep an eye out for a swarm of 50 adorable Paddington Bear statues erected near landmarks from the Royal Opera House to Paddington Station. Celebrities from Emma Watson to Benedict Cumberbatch designed their own version of the marmalade-loving bear from deepest, darkest Peru, and if you look closely at each bear, you can probably figure out the famous personality behind it. The bears will hang around London till the end of the year, when they will be sold for auction. All proceeds will go to the National Society for the Prevention of Cruelty to Children.

The bears also come just in time for the release of Paddington , the children's-book-to-movie adaptation starring Hugh Bonneville, Nicole Kidman, and Peter Capaldi, which will be released later this month in the U.K. The stars of the movie, along with other celebs, came together to design bears that make up the Paddington Trail, which includes bears like Boy Scout Bear from Bear Grylls to Julie Waters' green daisy bear.

So let's play which celebrity designed which bear, shall we? I'll make it easy and give you a list to choose from: Benedict Cumberbatch, Stephen Fry, Michael Sheen, Emma Watson, Nicole Kidman, David Beckham, Hugh Bonneville, Peter Capaldi. Now match them up! (Just be careful with your scrolling, the answer will appear after each picture!)

Butterflies. Yeah, that's really all we have to go on, but maybe go a bit deeper and think of hungry caterpillars and the entire metamorphosis process? Yeah, bear art is just that deep, I suppose.

Golden. Classic. Beautiful. Australian? OK, that was a spoiler.

Let's all please appreciate how well-named this bear is. This celebrity has to have an affinity for puns and obviously a love of the theater.

I love the lantern on his hat as I'm sure many Whovians would as well. And I suppose like the Doctor, Paddington did come from a long way to end up London. If it wasn't obvious, the Dr. Who reference is a huge hint.

#5 The Journey of Marmalade

Marmalade, as you must know, is a citrus preserve, which might be why it's Paddington's favorite in the same way that Pooh is always after honey. Did you notice the bread in his cap? Obviously, this Paddington designer loves marmalade sandwiches or maybe toast in the morning at his country manor.

Put your deductive reasoning to the test to solve this designer. He's obviously a detective, though the bear might not look exactly like the one this actor plays on TV. Yes, rather than the blue scarf, dark coat, and curly hair, this bear designer opted for a traditional perspective of Sherlock Holmes.

No, the paws are not literally golden, but this Paddington does have the three lions crest on his lapel, which is known as England's national football team logo.

Paddington is a real icon of British children's literature, so he could definitely work the Union Jack-et, if I do say so myself. I'm sure the comedian who designed this bear thought of that too. And he is correct, Padding is GREAT.

You can see all of the bears on the Visit London site, and while you book your ticket to actually visit London, you can also catch a glimpse of the cute trailer below.

More like this
Bennifer, Kravis, & 14 Other Fun Celeb Couples Halloween Costume Ideas
By Emma Carey and Brittany Leitner
Florence Pugh Reflected On Her ‘Don’t Worry Darling’ Experience On Opening Day
By Brad Witter
Adam Devine Hilariously Let Everyone Know He’s *Not* Accused Cheater Adam Levine
By Brad Witter
How To Stream 'Pretty Wild'
By Arya Roshanian
Get Even More From Bustle — Sign Up For The Newsletter