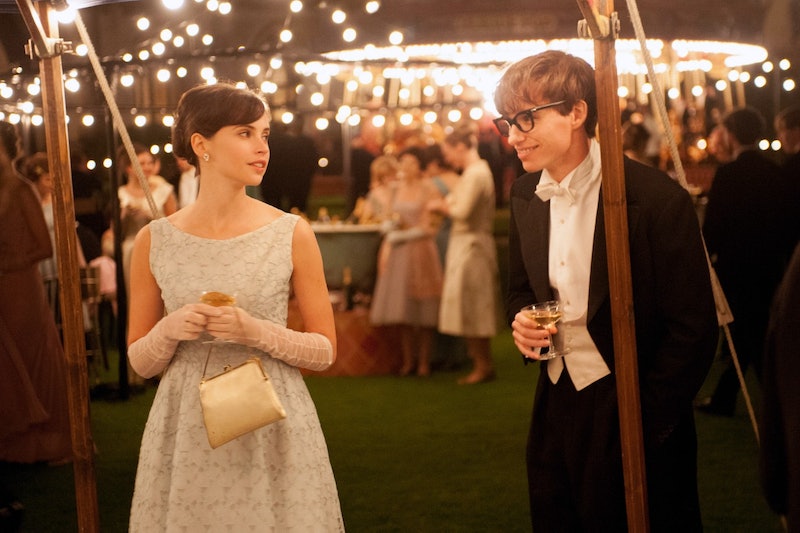 There are certain types of roles that inevitably create award season buzz, and Eddie Redmayne's performance as Stephen Hawking in The Theory of Everything is undoubtably one of them. But unlike other award-nominated pictures based on the extraordinary true-life stories of famous figures, Stephen Hawking is still alive. When 32-year-old Redmayne signed on for the role, he knew the person he was portraying on screen would not only see the film, but be a constant voice in the back of his head.

Redmayne spoke about his transformation into Hawking at the Los Angeles press day for the film, and opened up about his insecurities and fears taking on the daunting character.

"The second I got the job, it was this mixture of formidable privilege and great trepidation," Redmayne revealed. "I had to immerse myself in the world of Stephen, which is a pretty riveting world to orbit. I read as much of his work as I could, I tried to understand as much as I could — which was not very much."

To prepare for the role, Redmayne met with one of Hawking's longtime students, who attempted to explain some of Stephen's theories and equations. "Talk to me like a 7-year-old," Redmayne recalls telling the student.

But getting inside the scientific mind of Hawking was half the battle. The physical side, progressively deteriorating for several decades on screen. "I went to an ALS clinic where I was introduced to people suffering from this brutal disease. They were incredibly generous. Many invited me to their homes, so I got to see not only the physical stuff, but the emotional effects on families. Then I worked with a dancer to find that physicality in me," he explained.

While much of the movie's trailer centers around Redmayne as Hawking in his college years, this portion of the finished film is small. Redmayne is seen in a wheelchair, without the ability to speak for much of the film, and learning to adapt to long hours shooting in physically compromising positions wasn't easy.

"Part of the process is getting your muscles used to being able to sustain those positions. It's one thing to get into a position for a second, but not take after take," he said. "But every day you could get up out of the wheelchair, and having met 30 or 40 people who suffer from the reality of this disease, you are constantly conscious of how lucky you are."

Eddie Worked for months before shooting researching and reading as much about Stephen as he could get his hands on. But nothing could prepare Redmayne for meeting the man he would portray on screen himself.

"The last thing was meeting Stephen and Jane right before we started filming. Stephen was now idol like in my mind, and it was like meeting a rock star," Redmayne said. "I got completely tongue-tied. It takes him a while to speak now, so there were lots of pauses and I hate silence. I basically spewed forth information about Stephen Hawking to Stephen Hawking. It was pretty embarrassing."

After their initial meeting, Redmayne was able to "calm down" and soak in the man that is Stephen Hawking, allowing his real-life presence to inform his performance. "He can move so few muscles in his face and yet it's the most charismatic face I've ever seen," Redmayne said. "He was so funny, has a razor wit and this mischievous glint. But he really does have great power, and controls the room, and so I tried to combine all that, shake it up, see what happens."

Hawking acts as everyday inspiration for many, having been given a two-years-to-live prognosis and surpassed it by decades. Redmayne came out of filming particularly transformed by his character's own will to thrive and create. "He — and [Jane Wilde] — have lived their lives fully, passionately, looking forward. And I'm someone that gets caught up in the foibles and anxieties of the everyday. Seeing how they live and have chosen to fill their time on this planet is a great model of inspiration."

The Theory of Everything is a love story, a story about discovery and a story about family, but most importantly, it is a story chronicling a couple's resilience amidst unthinkable circumstance.

"Everyone has limitations in life," Redmayne concluded. "Forced on them by other people or by circumstance or by fate, but it's how one chooses to overcome them, or to deal with them, that defines us."

The Theory of Everything hits theatres November 7. Watch the trailer below: