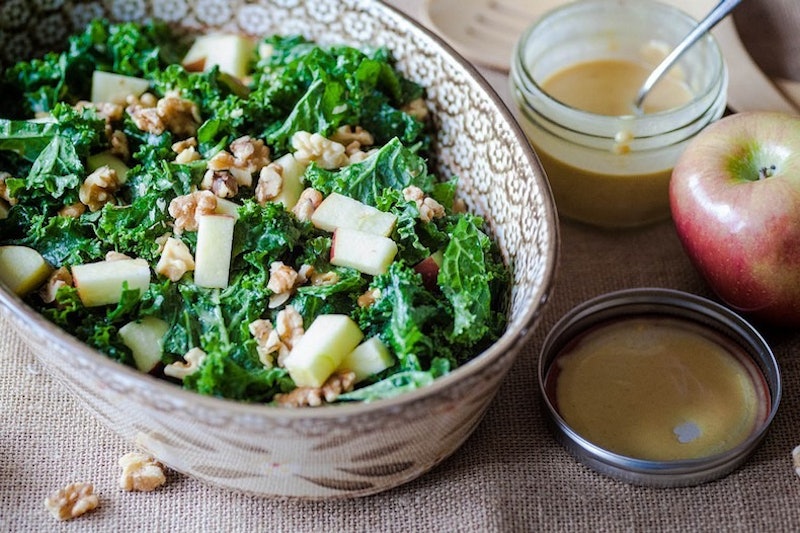 If you're like nearly one-third of Americans, you've steered clear of dating any people who identify as vegans. It's true: According to a 2012 Match.com survey of 4,000 single people aged 18 to 75, 30 percent of omnivores wouldn't consider dating a vegan or vegetarian. Ironically, ninety-six percent of vegetarians and vegans in the same poll said that they were open to dating an omnivore — so the issue isn't that vegetarians and vegans aren't willing to associate with meat eaters, but rather that omnivores refuse to get down with their tempeh-chomping brothers and sisters. What's with all the veggie haterade?

Well, though vegan celebrities like Bill Clinton, Alicia Silverstone, Brad Pitt, and Ellen and Portia (not to mention Jay-Z and Beyonce for, you know, 22 days that one time) have given the diet a higher profile and more mainstream recognition than ever before, vegans are still few and far between— which means that most people are probably relying on stereotypes of vegans, rather than their actual experiences with vegans, when they consider dating them. Indeed, according to a 2012 Gallup poll, only two percent of Americans identify as vegans. (That's the same percentage of Americans who think that Brian Williams is the vice president, for those of you keeping track at home.)

And while it makes sense to avoid romantic entanglements with vegans if, say, your social life and personal philosophies revolve primarily around smoking your own venison, if you're just an average omnivore who thinks dating a vegan will lead to boring food or constant ethical battles, give it a second thought. Vegans are more varied than you may think. November is World Vegan Month — but could it also be World Bang a Vegan Month for you? Read on and find out if there's room in your heart for an animal product-free honey.

YOU WON'T ACTUALLY GET JUDGED ABOUT YOUR EATING HABITS

Yeah, some vegans are judgmental and self-righteous. And some drivers text while driving — but that's the shitty exception, not the rule; just like being a totally judgmental vegan. In fact, vegans are so used to being randomly judged by strangers for their diets that they're probably not very interested in judging you. Thirty-five percent of vegans have a non-vegan spouse or partner— and based on those Match.com statistics above, it seems like if vegans had their way, that number would be way higher. So don't freeze our a vegan love connection out of fear that they want to rant about your diet and convert you. Most vegans just want what everyone wants: a person to rub their fun parts on and watch HBOGo with.

When a lot of people picture dating a vegan, all they can imagine is the cheeseburgers that they'll have to pass up in favor of evenings spent cracking their own bulgar. But here's another way of looking at it: no matter what your diet, you could probably stand to eat more vegetables. Most Americans only eat 1.5 cups of vegetables and fruits daily, even though it's recommended that we put away 2-3 cups. And half of the vegetables we do eat are either potatoes or tomatoes — extremely delicious vegetables to be sure, but not exactly a varied diet.

Vegans have to be more creative with their produce than omnivores, in order to get their fill of vitamins and protein. So even though you'll most likely keep eating meat when you're apart, the veggie-centric eating you'll do when you're together can be a boon to your health — after all, a diet with a lot of fruits and vegetables can lower your risk of health problems like heart disease. So you can keep enjoying as many Animal Style In-N-Out burgers as your heart/stomach demands when you're apart, and then have the added bonus of having your vegan date feeding you some vegetables whenever you're together. Best of both worlds, right?

...and TRY SOME NEW FOODS

Maybe you're already an adventurous eater. But if not, logging time with a vegan can expose you to new foods that you may have never tried or even known about before. Contrary to the stereotypes, vegans don't spend all their time eating fake, weak-ass approximations of meat-based foods; there's a whole world of plant-and-grain based vegan meals from around the world that vegans can and do eat all the time. This food can be exciting, it can be delicious, and hell, you might actually find out that you're the one with the boring diet.

Most people tend to gravitate romantically towards people like ourselves — folks with similar religious, political, and lifestyle beliefs. Some of this is practical — it's easier to make it through a night of binge-watching The Mindy Project with your boo when you're not having constant screaming fights about whether or not global warming is real, for example — but some of this is based out of fear, too. What if we meet someone with different spiritual beliefs, and find that our own start to seem lacking? What if meet someone incredibly nice who happens to hold opposing political views, and have to revise our views about whether only heartless monsters vote for the other guys?

There's a strain of that in people's refusal to date vegans, as well. What if s/he starts asking me questions that I don't want to deal with, or don't know how to answer? What if being around a vegan all day makes me start questioning my allegiance to barbeque?

Hey, I can't promise that dating someone different won't cause you to ask weird and/or hard questions about yourself — but that's a good thing. Your strongest beliefs can hold up to a little friendly scrutiny — and it doesn't have to feel defensive. You two can learn about each other's beliefs and lives without anyone proselytizing or getting angry. It's actually a little bit more interesting than spending all your time around someone who holds the exact same beliefs as you, even!

Some vegans do sunrise yoga and only eat organic, and some vegans spend nine hours a day playing World of Warcraft and eating Airheads (which are completely vegan!). Some vegans devote their lives to vegan issues, and some just think of it as just an element of their identity, like their fondness for rhythmic gymnastics, or their vintage bottle cap collection. Some vegans are named Ellen DeGeneres and host extremely popular TV shows, and other vegans have different jobs (or so I hear).