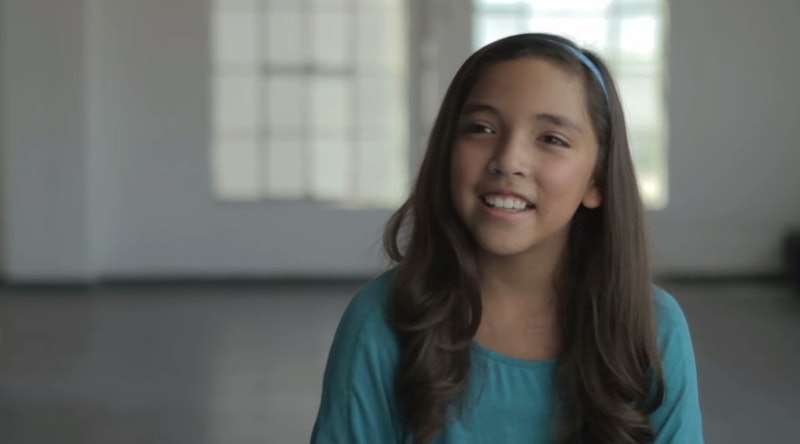 At first glance, a video currently making the rounds — “Comfortable: 50 People 1 Question” from the Jubilee Project — might look a lot like other similar videos we’ve seen in recent years. Its focus is body image; it features real people, rather than actors, seated in a studio and speaking candidly to the camera about a question posed to them by the folks making the video. In just four minutes, it wants to realign your perceptions about body image and make you feel better about both yourself and the world. If these kinds of videos bother you, then you may want to skip this one... although I also think that there's something a little bit different going on here than there usual. As such, I think it's worth talking about — so let's take a closer look, shall we?

The question on the table this time around is certainly a loaded one: “If you could change one thing about your body, what would it be?” The video assembles 50 people of a variety of genders and backgrounds — but there’s a catch: Not all of them are adults. About half of them are children, and, as you might have guessed, the answers to the question change dramatically based on how old the respondent is.

“I Would Change My Forehead.”

“I have a really big forehead.”

“The Puffiness of My Face.”

“Because I have dealt with acne and eczema issues ever since I was a kid.”

One woman who wished she was taller summed it up succinctly: “When I was younger, I felt like I wasn’t quite… adequate enough.”

“Have a Mermaid Tail.”

“Have a Shark Mouth.”

“I Would Have Teleportation in My Body.”

“I Want Legs Like a Cheetah So I Could Run Faster.”

“I Don’t Think There’s Anything to Change.”

Mermaid tail girl added at the end, “I like my body, actually.” She just wants a mermaid tail in addition to what she’s already got.

You might have already arrived at the observations I’m about to make about the actual content of the video, but let’s talk about them for a moment anyway. The adults, you’ll notice, focus on realistic flaws — the things they don’t like about themselves. Often, these perceived flaws aren’t even necessarily something that can be changed — or at least, not without surgery. What our ears and foreheads look like come down to genetics: They’re what we’re born with. The kids, though? Their answers are fantastical, rather than realistic — and what’s more, a lot of them are about potential: “I want cheetah legs because I want to be able to run super fast.” “I want a shark mouth so I could eat a lot of things.” And most important of all? “Nothing” is a viable answer for them — which stands in particular sharp contrast to the adult woman who asked, “Only one?”

As I mentioned earlier, “Comfortable” feels exactly like Dove’s “Real Beauty” campaign, Pantene’s “Not Sorry” spot, and all of those other ads put out by beauty companies as a means of shilling products under a feel-good banner. But “Comfortable” is actually a tiny bit different, and here’s why: It’s not an ad. It's a PSA.

According to its “About” page, the Jubilee Project is a 501c3 that “exists to tell stories that inspire change.” As its founder, Jason Y. Lee, wrote at the Huffington Post in 2010l, “The purpose of the Jubilee Project is simple: To make videos for a good cause — anything from raising awareness, to fundraising money, to capturing random acts of kindness. The hope is that each video inspires others to make their own video, which causes this goodwill to go viral. After all, goodness is contagious.” “Comfortable” was, in fact, sponsored by a company — iNature Skincare — but unlike the Dove and Pantene spots, its end goal isn’t to be an advertisement for that company. The distinction may seem subtle, but I think it’s an important one to make. Yes, it’s a beneficial arrangement for both parties — iNature Skincare gets their name out there a little more, and the Jubilee Project gets the funding necessary to achieve their vision of “producing entertaining content that will empower, enable, and inspire others to do good as well” — but its primary function isn’t to make us spend money on something we probably don’t actually need.

I would also argue that the video isn’t entirely successful at its goal; it doesn’t, for example, go into why adults answer so differently than children. I’m sure that what we’re meant to take away from it probably has something to do with how society shapes our perceptions of ourselves over time — but that's also likely a little bit of a simplistic view. There are probably a few other things at work, too; e.g., developmentally speaking, kids are at an entirely different place than adults — so of course how the question of what you'd change about yourself is both perceived and answered will change based on how old you are. What the video does do quite well, though, is remind us that the “adult” view of the world isn’t the only view. We might not be kids anymore, but that doesn’t mean we have to stop dreaming about what we’d do if we had shark mouths or teleportation abilities — and it doesn’t mean that just because we’re asked what we change about ourselves that there actually has to be something we should want to change about ourselves.

Now if you’ll excuse me, I have to go see a person about a mermaid tail.