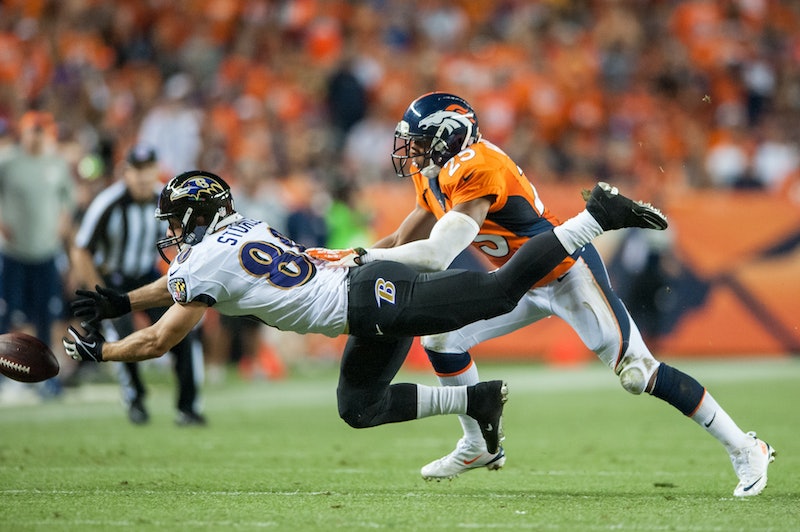 Women now make up 20 percent of all fantasy football players, according to the Fantasy Sports Trade Association. Some 5.8 million women participated in fantasy leagues in 2012.

I'm accustomed to seeing fantasy football ephemera in male friends' status updates. But I've been noticing not just an uptick in the number of women mentioning it on social media, but that it also includes ladies who aren't necessarily even football fans. Fantasy football is like Candy Crush for me these days; I don't understand the appeal, but I do recognize that everyone's doing it.

I asked around a little bit, trying to get a feel for why more women are joining in. Tammy is an NYC theater director who recently gave into pressure to join her (female) best friend's league. "I decided to join, honestly, because we started watching The League and it cracks me up," says Tammy. "And I love some (thoroughly unjustified) smack talk. I've been doing mine out in haiku form."

Tammy's league is comprised mostly of couples, for a nearly 50/50 gender split. So far, Tammy's favorite part is that it gives her a reason to care about games not involving her home team.

Rachel, a 31-year-old who works in San Francisco, is in her second year playing in a fantasy league with friends. She said for her, it's "a social thing. It's something fun to be involved in. And it teaches me the rules of football. I didn't grow up in a football family, so playing fantasy teaches me the positions and I begin to understand the dynamic and the nuances and strategies behind plays."

There aren't many other women in her league, "but the women that do play are legit," she says. "I'm more casual... but I do have a pretty solid team this year."

Crissy Ross, a 30-something librarian in Cincinnati, also stresses that fantasy leagues provide a great way to learn about the game. She's been playing in a league with her husband, sister, and a mix of men and women for five years now.

"We all had Bengals season tickets together for a long time, and fantasy just kind of happened out of that group," she says. "It's a lot of fun, and keeps you excited about football all season. You don't have to be a football guru to win."

Liz is a graduate student whose male classmates "were quite persistent" about her joining their league this year. "I was interested, from a distance, because I grew up in SEC college football country and always appreciated watching a good game," says Liz. "So, I joined because it was something new I always wanted to try."

"There are plenty of instructions available online and on the ESPN fantasy site, but I was still pretty clueless to how the process worked," she admits. "I got mansplained to quite a bit by the league leader, but I feel that was bound to happen."

Though there's only one other woman in her league, Liz says she's noticed a general increase in women playing recently. "I know of one woman who is a part of an all-female league. Their name is 'Blood Bath and Beyond,' which kinda makes me think of roller derby."

"Women have the best fantasy football team names," says Hanna Brooks Olson, a writer from Seattle. "Mine is Critical Sass."

Though she's a lifelong fan of real football, this is Hanna's first year on a fantasy team. "I joined a league at work," she says. "I'm not 100 percent sure how it works, really."

This is obviously a very small, very biased sample, but it seems fantasy football has become a thing that women other than hardcore NFL fans feel comfortable doing. And despite the tendency of articles and websites directed at women players to stress the relationship potential in all this (GirlsFantasyLeague.com points out on its homepage that playing can "improve your relationships" and help you meet men), none of the women I chatted with joined for reasons other than having a good time themselves.

"For the record," Liz says, "my boyfriend could give two flying fucks about fantasy football."