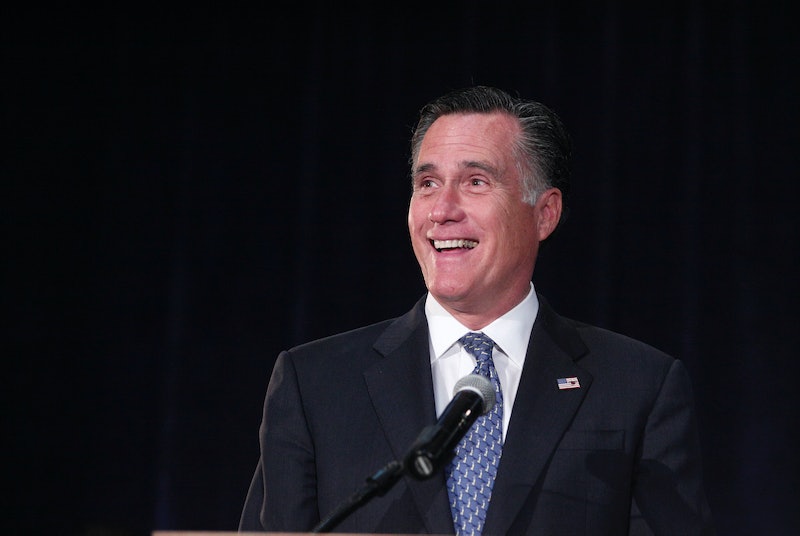 Mitt Romney, the Almost-President and reigning king of presidential candidate gaffes, has gone and done it again, providing us with more light-hearted political fodder for dinner conversations.

A refresher: While running for president in 2012, the Massachusetts governor unintentionally painted himself to be an out-of-touch rich kid, what with him jokingly placing a $10,000 bet with Republican presidential candidate opponent Rick Perry, and his baffling statement about the middle class earning an annual income of $200,000 to $250,000.

The former Bain Capital founder who later decided his destiny lay in politics (but of course, his heart will always remain at Bain) also blessed us with gems like "corporations are people too, and "binders full of women" in response to an audience member at a presidential debate with Obama. Said audience member had asked Romney how he planned to correct inequality at the workplace, and his reply was:

And — and so we — we took a concerted effort to go out and find women who had backgrounds that could be qualified to become members of our cabinet. I went to a number of women’s groups and said, "Can you help us find folks," and they brought us whole binders full of women.

This time, Mitt has given us more ammunition, sans the pleasure of humor. In a Fox News interview on the night of the Midterm Elections, the governor said that the argument about the "war on women" doesn't hold any weight anymore.

The last part cuts off, but here's the entire quote:

This rhetoric about the war on women or the war on one thing or another, I think people are saying, "You know, this just doesn't carry water anymore."

Funny coming from the person who accused Obama of engaging in a war on women when he was trying to be president. I suppose Mitt doesn't believe in income inequality or women's reproductive rights, either. But who knows what he really thinks? After all, the man is a renowned flip-flopper himself.