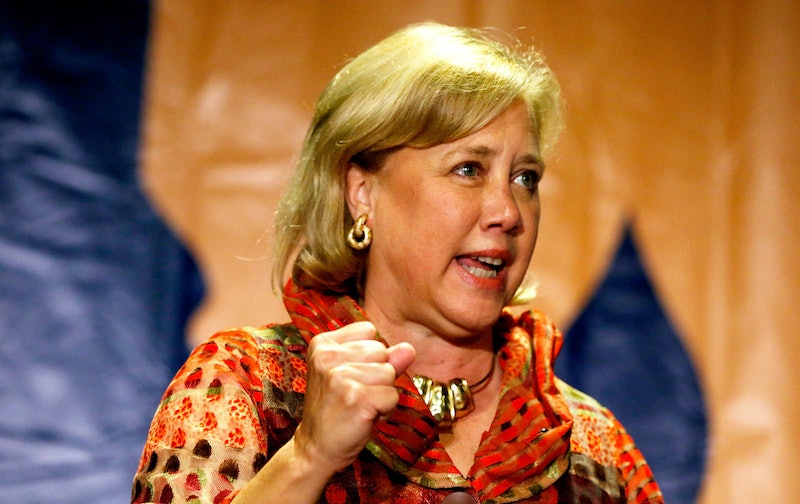 The Senate race in Louisiana will not be decided on Tuesday. Since neither of the top candidates was able to secure more than 50 percent of the vote during the midterm election, the Louisiana Senate race will have a run-off on December 6 to select a winner between incumbent Democrat Mary Landrieu and Republican rival Bill Cassidy. In the weeks leading up to Tuesday's elections, Landrieu was facing solid competition from both Cassidy and tea party Republican candidate Rob Maness. Though some of the latest polls showed Landrieu ahead by as many as eight points, the race has been extremely close. Even before the run-off was officially announced, experts were predicting such an outcome as they followed the numbers. Now they're making predictions about what will happen in the run-off election in December, and according to them, the tables may turn on Landrieu.

Polls indicate that Cassidy would take the edge over Landrieu in the run-off, 50 percent to 47 percent. One of the factors that could influence results in the run-off election? The smaller voter group that will likely turn out in December. Until then, the official number of Senate seats secured by either party will not be revealed for another few weeks. In the meantime, let's get a refresher course on the two candidates vying for Louisiana's Senate seat.

Incumbent Landrieu has been emphasizing her position as chairwoman of the Senate Energy and Natural Resources committee in order to appeal to constituents in oil-rich Louisiana. And like many other Democratic candidates in red-leaning states, she's been working overtime to distance herself from President Obama, who is extremely unpopular in her state — though she supported Obama's highly partisan Affordable Care Act.

Landrieu is also no stranger to scandal. Last month, Cassidy used a photo of Landrieu helping a constituent perform a keg stand to criticize her and lead voters away. He told the crowd at an event:

Binge-drinking is associated with DWIs, with traffic facilities, with death on campuses, with rape of young women, with fistfights. It's not something to celebrate.

Landrieu shrugged and countered by saying it's "just the way we roll."

A doctor and a three-term congressman, Cassidy has been adamantly against Obamacare and has tried to paint Landrieu as a staunch Obama supporter. Not surprisingly, Cassidy is making healthcare reform a central part of his platform, writing on his official campaign website:

Instead of Obamacare’s one-size fits all approach, patients should be able to choose the plan that is most in line with their needs.

Where Cassidy lacks support from his party is on immigration reform, which Republicans think he's been too moderate on. And Cassidy had his own share of scandalous revelations when it was discovered that he donated to Landrieu in 2002. Now Cassidy's focus will be on persuading the more right-leaning Maness' supporters to come out and vote for him in December. Images: Getty Images (2)