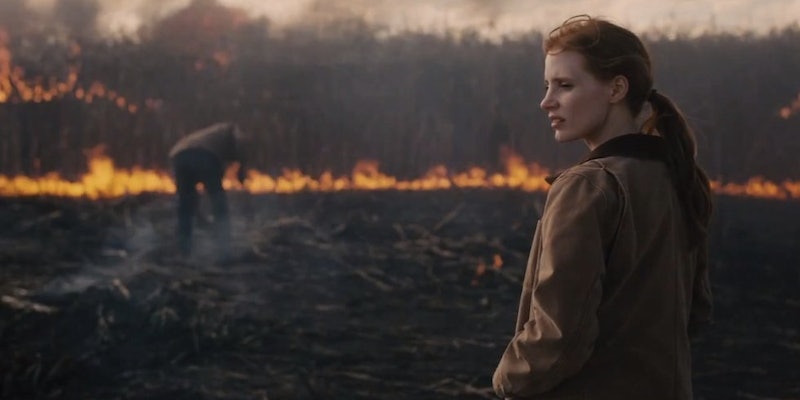 (Warning: The following contains major spoilers about the ending of Interstellar.) Interstellar welcomes us into a future none too bright — one wrought with famine, dust storms, lapsed technological resources, and an America barely recognizable to the land we know today. Though tremendously ominous in its own right, Interstellar’s illustration of a planet down the line lacks the fantastical theatrics of its fellow contemporary “post-apocalyptic” films. We find no elaborate dictatorships, no eccentric social regimens, no outrageous formalwear… in short, Interstellar’s bleak future is one that is just realistic enough to fear. So, in our apprehension of this stark inevitability, we can’t help but wonder: When is this all going to go down? In other words, when, exactly, does Interstellar take place?

The era is never assigned any dates outright, leaving viewers to lie awake in dread of a fate that might befall us any day now. Luckily for those who don’t find such an activity particularly appealing, there are hints planted in Interstellar that clue us into its relative time period. And they lie, principally, with John Lithgow.

Lithgow, playing farmer-turned-space-explorer Matthew McConaughey’s live-in father-in-law Donald, occupies his time by lamenting the poor decisions of his son-in-law and reflecting wistfully on better days. Donald seems to be a member of the last generation to have known an Earth that seems recognizable to us today. He remembers when technology reigned supreme, citing a youth in which “new gadgets” were invented and publicized practically every day — sound familiar? He remembers a time of professional sports, of a prolific meat supply, and reverence for space exploration.

We also know that these memories are exclusive to Donald (and others of his age, presumably). As Coop, McConaughey plays a man who never got the chance to bring his passions for science and innovation to life — who, as Donald insists, was “born too late or too early.” Either way, he wasn’t born into our world. But Donald sure seems to have been.

The 69-year-old Lithgow acts not only as a voice of reason, but as the last vestige of modern Earth we can spot in Interstellar — as that glimmer of today that is necessary to keep such a story grounded in tangibility. Heck, without this feature, the character would be altogether superfluous. Sure, the script entailed somebody to stay and look after the kids when Coop shot off into space, but there are dozens of ways to write around that. There’s a reason that a grandfather was chosen: to play the role of the movie’s connection to now.

As such, we can pare down the setting to a reasonable degree.

If we are to believe that Donald was a young man or teenager, as his memories are a bit too drenched in severity for him to have been all that young — in our present, then we can trace his birth, most likely, to the 1980s, ‘90s, or, most likely, 2000s.

Although the range seems logical, it seems wise to weight toward the latter years due to the implications the dates would have on Coop's narrative. A 2000-born Donald would make give late-30s Coop a birth date in the neighborhood of 2030, 2035, which would trace the decline of technology and the influx of Earthly decay to a point around, or soon after, this time.

As such, this lands our year of arrival into the Interstellar world in or around the 2070s. In other words, not too far down the line from now... so let's enjoy the lack of dust storm epidemic while can.