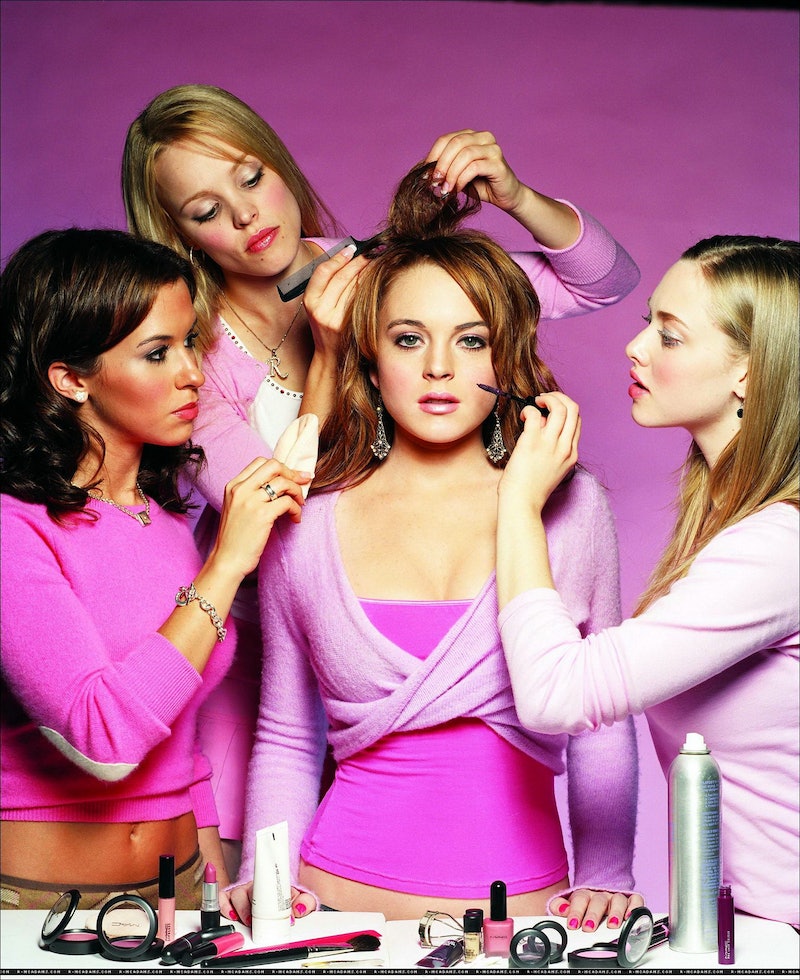 The entire year of 2014 is a remarkable year for, well, many reasons. But none of those reasons seem anywhere near as important as the fact that it's the ten year anniversary of Mean Girls . The film that revolutionized an entire society and gave us memes that would never, ever die first came out in 2004 and since then we've been celebrating Mean Girls Day on October 3, telling boys that they look sexy with their hair pushed back, and wondering if butter is a carb. Thus, it's no surprise that Entertainment Weekly got the Mean Girls cast together for a reunion. Someone had to do it some time and what better time is there than the ten year anniversary of the film?

However, I found the reunion interview to be a letdown. Oh, don't get me wrong, I was very, very happy to hear the cast give their insights on the film and on their characters, but some of their insights were just, well, wildly inaccurate. I'm talking, of course, about the part of the interview where Rachel McAdams, Lindsay Lohan, Lacey Chabert, and Amanda Seyfried all predicted where they thought each member of the Plastics would be now. Regina George, a lowly Real Housewife? Cady Heron, teaching children? Um, how about no?

Here's the real rundown on where the Mean Girls characters would be in ten years, thank you very much.

According to Seyfried, "Karen would manage or own a store that sells really cool dog attire, like Swarovski dog collars and Halloween costumes for animals. She’s probably really focused." That's really nice and everything, but I would eat my left shoe if Karen didn't grow up to be a weather girl. In fact, she could even pull a Hilary Banks a lá The Fresh Prince of Bel-Air and parlay that job into her own talk show. Knowing her, she'd call it Karen Hosts This.

According to Lohan, "Cady’s with Oprah in Africa working at children’s schools with a family, teaching girls to be nice to each other." That's all good and everything, but I've always envisioned Cady as the live action version of Eliza Thornberry from The Wild Thornberrys. In ten years, she would be a philanthropist and UN Ambassador for sure, with a side career as an author of self-help books. Either way, she'd be traveling. A lot. Teaching is way too stationary for her.

According to Chabert, "Gretchen is probably running the Toaster Strudel empire. She is probably married and has, like, seven babies right now. She and Jason worked it out. She has very big curly hair." Sure, Gretchen seems to be the only heir to the Toaster Strudel empire and it's very likely she'll inherit it from her father, but can you see Gretchen running a company anywhere but into the ground? The girl can't keep a secret! I think she'd be better off growing up to be a translator. If she can learn Chinese to hang out with the Cool Asians, she can learn any language.

According to McAdams, "Regina is a Real Housewife. She’d have too much time on her hands, for sure. She’s probably found all her other Reginas." Like Regina George would ever settle for being a lowly housewife let alone one of many starring on a season of Real Housewives. No, Regina George would grow up to be a Kardashian. She would have her own empire, her own franchise, her own television show, and be in a high-profile relationship with Instagram selfies (and Kanye West). Regina Takes the Hamptons anyone?

And, not that any of them were present for the EW reunion, but here are my predictions for the rest of North Shore High as well.

No offense to Aaron or his sexy, pushed-back hair, but he didn't strike me as the most intelligent and willful person in the world. He would definitely be someone's trophy husband in ten years. Perhaps with a side of modeling because, I mean, look at him.

Janis would be the hottest artist the world has ever seen, with a legacy that would extend far past her death. However, being the toast of the artistic world would only be the result of a decade of being largely unknown and penniless and mooching off her roommate Damian. So picture her life as Rent, but without the drugs and death.

There can be no doubt that Damian would transform a budding reputation as a social media mogul and YouTube star into an eventual career as an entertainment correspondent for EW or E! News. Interviewing stars on the red carpet and then going home and updating all the followers on his YouTube channel would bring in the big bucks for him.

Kevin would be on his third underwhelming rap album. His most famous moment would be as the runner-up on a season of American Idol, where he performed a rendition of Drake's "Started From the Bottom" that had the judges in tears. Of laughter.

Glen Coco would be a politician on the fast track to becoming President of the United States. Look how popular he is in high school. Those swing states wouldn't know what hit them.