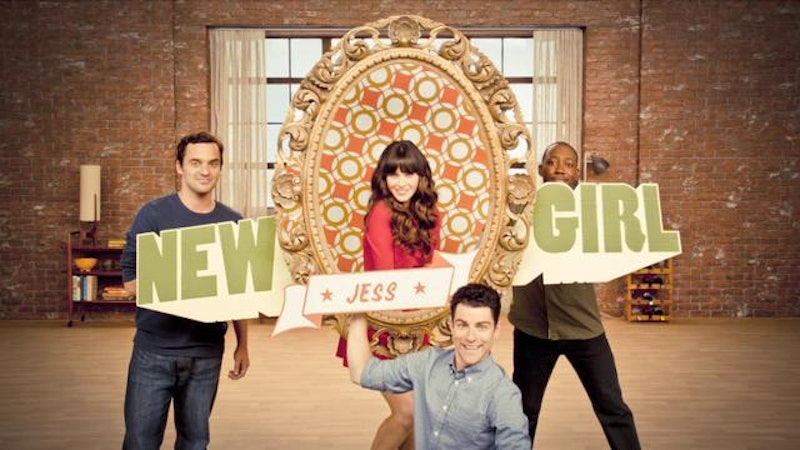 Friends, New Girl fans, bored Bustle readers at work, we gather here today to mourn the incredible loss of the old New Girl credits. Yesterday, November 4th, it was announced that the old New Girl credits were unceremoniously dumped, replaced with a makeshift model to include cast members Hannah Simone and Damon Wayans Jr. It was a harsh loss to New Girl, to television, and indeed, the entire world.

I can't say that I've been close with New Girl in recent years. We were together in it's first two seasons, but things quickly got difficult at the start of the third. One day I finally thought to myself, "I mean, it's not bad, but with Nick and Jess already together do I really want try to swallow another 20 episodes of this?" And with a heavy heart, I came to the conclusion that, naaaah, I don't.

So we split amicably, but still occasionally stayed in touch. I found the episode with Prince a delight, and of course, I remained a passionate fan of the theme song. Sometimes when I was feeling lonely during my Rutgers days, I would play "Hey Girl" as I would walk around campus, and it would comfort me in my time of need. I'm sure you will all do me the similar kindness in forgetting I just wrote that publicly.

Inevitably, we considered that with Wayans semi-recently added as a regular (and Simone pretty much always being a regular), they could possibly creep into the opening credits at some point. We just never imagined it would be so abruptly, so vulgarly, so out of the blue. But television is like that, it is cruel, it is unmerciful, and sometimes it makes sacrifices in the interest of time and budget constraints.

I understand this is a difficult time for all of you, and we're now left with all these unanswered questions. Where are you going? Whatcha doing? I'm not alone in your agony. How will I even know "who's that girl?" It could be anyone.

Nevertheless, we should carry on by reflecting on the beauty of it's very existence. It lived until the ripe old age of 77 episode. That's longer than Freaks and Geeks, My So-Called Life, and Twin Peaks put together. I think. I'm not really a math person.

Let us never forget those cartoon cut-outs, the reluctant roommate participants, the practically-curtsying Deschanel that combined into a 22-second summary of the series. Love it or hate it, the old New Girl opening credits lived it's life perfectly complimenting a show self-described, unironically, as "adorkable." We will never forget it for that.

The old New Girl credits is survived by the new New Girl credits, which is essentially 3 seconds of the old theme song and leftover head shots stitched together in iMovie.

More like this
17 Years Ago, 'Hannah Montana' Reportedly Almost Cast This 'Gossip Girl' Star
By Grace Wehniainen
Coldplay Surprised Fans At Wembley Stadium With This Special Guest
By Frances Stewart
Shakira Joked About An Early 2000s Video Of Her First Camera Phone Encounter
By Stephanie Topacio Long
Selena + Chef Season 4 Was Filmed At Hannah Montana's Old Malibu House
By Jake Viswanath
Get Even More From Bustle — Sign Up For The Newsletter