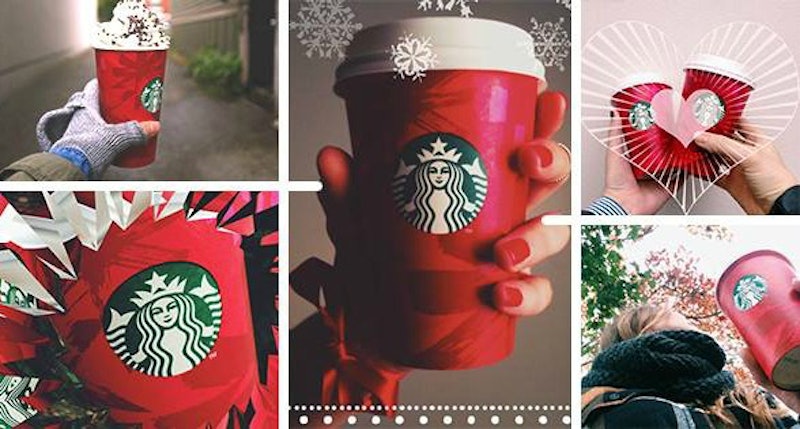 Well, it’s happened: Starbucks’ red holiday cups are back, and predictably, ‘Bux lovers everywhere are over the proverbial moon about it. To be honest, I’m not totally sure why the return of the red cups is such a huge event; they’re just paper coffee cups, after all. But I assume it’s what they represent that’s actually important, rather than the cups themselves: Holiday cheer, goodwill towards people, and tasty beverages you can’t get at any other time of the year (hi there, Chestnut Praline Latte!).

At least Starbucks allowed Halloween to pass before breaking out the festive beverage receptacles, though. If you’ve been watching closely, you probably noticed that somehow, holiday marketing managed to sneak its way into some stores even before we’d finished dressing up, spooking ourselves, and gathering overwhelming amounts of refined sugar. Actually, hang on a second — no. It’s not just holiday marketing. It’s Christmas marketing. Even if you don’t celebrate the holiday, no doubt you’ve noticed the insidious nature of its marketing; each year, it begins sooner and sooner, infecting everything with peppermint sticks and gingerbread long before its time.

All this nonsense got me thinking: When will the early Christmas marketing stop? Will it ever stop? What if it just keeps going until… well, until the unthinkable happens? Here’s how I imagine it will go down:

In the beginning, holidays are just as they should be. Each one receives its due diligence throughout the year, with little to no overlap (except in special cases, as in 2013 when Hanukkah and Thanksgiving had to figure out a way to share the same space). Christmas, jolly fellow that it is, magnanimously agrees that every holiday has a place, and every holiday in its place. “It simply doesn’t do to be greedy,” it insists.

2. Put Away the Spider Webs, Break Out the Tinsel

However, despite its outwardly egalitarian appearance, Christmas is secretly somewhat dissatisfied with its place in the grand scheme of things. All holidays may more or less be created equally… but surely Christmas is just a tiny bit more notable than the others, no? Accordingly, Christmas puts its sneaking shoes on this year and creeps past Thanksgiving, making sure to stop when it bumps gently against Halloween’s orange and black behind. There. That should fix things.

With the success of last year’s subtle jump forward, Christmas begins to feel a little bolder. “Halloween won’t mind if I cut in front of it just a little,” it thinks while sidling past the skeletons and the jack-o-lanterns. It nudges Labor Day, asking quietly if it would mind terribly if it takes the seat next to it. Labor Day allows it; it’s somewhat tickled by the idea of the “no white after Labor Day” rule becoming “white after Labor Day becomes winter white” instead. Christmas chuckles softly to itself, pleased with its progress. It begins planning something… bigger.

After spending the entire previous year deep in thought, Christmas launches a new and ambitious plan of attack. It strides brazenly up to Independence Day, pushing Labor Day out of the way and knocking it to the ground. While Labor Day frowns at the dirt smudged across its “winter white”-clad knee, Christmas settles itself right next to Independence Day without so much as a by-your-leave. Independence Day eyes Christmas, ready to jump up in arms at the first sign of trouble; Christmas, however, appears to be quite comfortable in the area surrounding July 5. Independence Day lets it slide, while Christmas silently congratulates itself on a successful maneuver.

5. School’s Out for… Christmas?

But the next year, Independence Day finds itself beaten to the ground, its fireworks somehow dimmed by the force of Christmas’ sparkling, twinkling, festive lights. Ever more pleased with itself, Christmas barrels onward stopping, abruptly right before the children find themselves free from the confinement of school. Won’t they be surprised to see Christmas waiting for them on the other side instead of summer vacation?

7. I Love You, But I Love Christmas More

Neither does Cupid. As Christmas grows stronger, drunk on its own might and duration, it rips the bow and arrow from the cherub’s hands and snaps them with its powerful evergreen claws. In its wake lie the other holidays, stretching all the way back to poor Thanksgiving, licking their wounds and nursing their defeat. Christmas not only feels invincible; it now believes it is invincible, as well.

8. Happy New Year! What Do You Want for Christmas?

It should come as no surprise, therefore, that the following year, when Christmas encounters Baby New Year, the terrified infant runs from the battlefield. Who could blame the poor fellow? After all, he is only a newborn; Christmas, meanwhile, has the force of years of stolen time on its side. With the baby out of the way, Christmas is tempted to go the whole hog… but it manages to stop itself. Next year, it tells itself. Next year will be its crowning moment. One must be patient.

9. The End of All Things

Finally, there is no one left to stand in Christmas’ way. It strides purposefully through the calendar, month after month, until it meets its former self. It does not pass over completely into its own past; instead, it prepares itself to take up residence the day following it. Christmas’ domination is complete. Decorations will never be taken down. Department stores will play music worshipping the holiday at all times. Starbucks will serve only red cups, and they will all be filled with either Pumpkin Spice Lattes or Peppermint Mochas. We will be stuck in a state of perpetual holiday marketing, a dystopian society with Christmas holding sway over us all. If you’re reading this message, it means that the Resistance’s efforts to uncover Christmas’ secret method of time travel have been successful. You must not allow this future to come to pass. Stop Christmas. Stop Christmas at any and all costs. We’re depending on you, Gentle Reader.