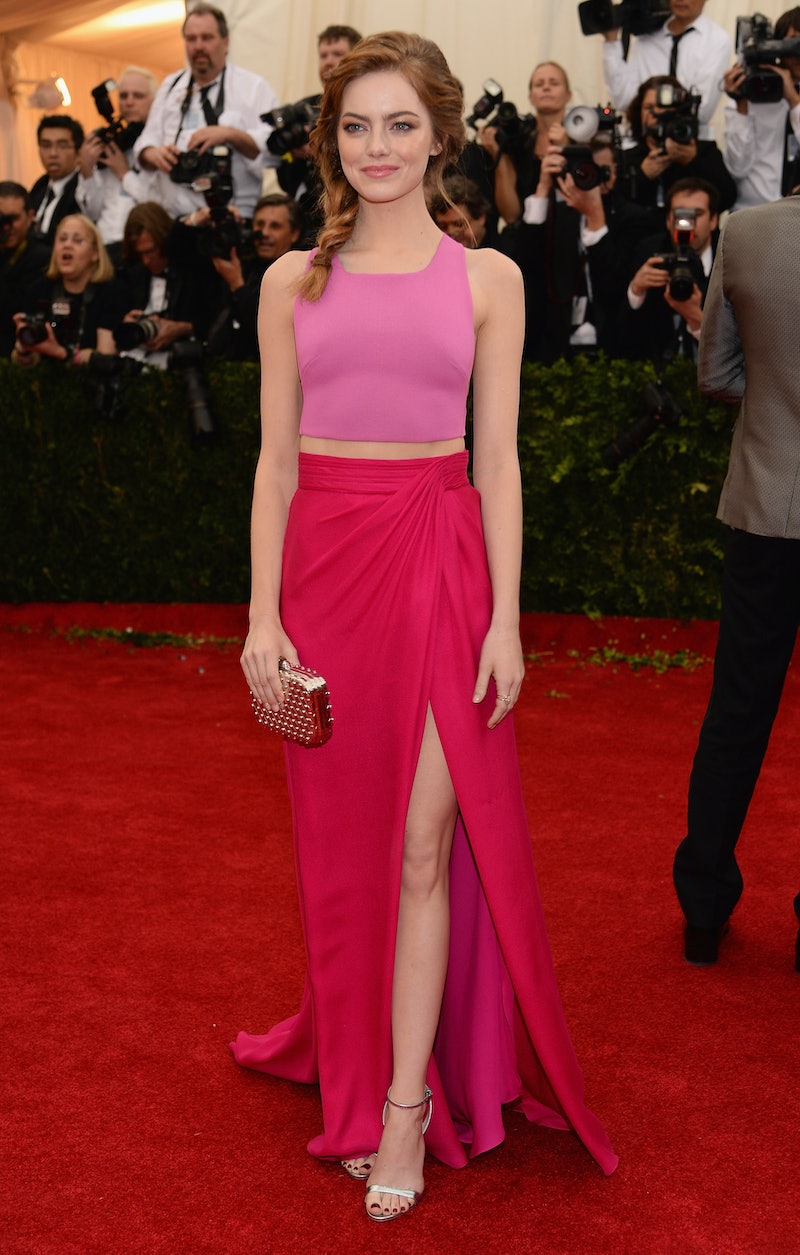 As the small glimpse we got last month of Emma Stone in full costume suggested, her upcoming role on Broadway as Sally Bowles in Cabaret is going to be a pretty different look for her — especially comparing to the movies she's starred in before, such as Easy A and Spider-Man. However, after seeing these photos from Vanity Fair of Emma Stone not only in full costume as Cabaret 's Sally Bowles, but also on the actual set with cast members like Alan Cumming, I'm beginning to think it's not just going to be different for her — it's going to be her most daring role yet.

In the new set of photos, Stone is seen with co-stars — including Cumming, Stacey Sipowicz, Benjamin Eakeley, Andrea Gross, and Kaleigh Cronin — on the actual show's set in its venue at Studio 54 in NYC. Though it's a huge change from her previous roles as, mostly, teen heroines like Olive in Easy A, it's clear from the photos that Stone is very much into the role. In fact, as the actress revealed to Vanity Fair, nabbing the part as Sally in a stage production of Cabaret is actually a longtime dream realized: "I’ve wanted to play Sally Bowles since I was 10, when I saw Natasha Richardson in Cabaret...I don’t think I’ve ever been so truly obsessed with a character or a story. I can’t believe this is actually happening!"

With her debut coming up quickly — Stone's first performance is set for Tuesday — these photos definitely could not have come at a better time. And, if you weren't stoked before...

...this should help bring the excitement to a fever pitch, because, seriously: She looks all caps FIERCE.

Stone will make her Broadway debut on Nov. 11.

More like this
Then Vs. Now Photos Of The 'Enchanted' Cast In 2007 & The Sequel's Stars In 2022
By Marina Watts
24 Photos Of The 'Love Actually' Cast Then & Now
By Grace Wehniainen
The 'Love, Lizzo' Harry Styles Scene Is Just 1 Moment That Made Fans Feel Seen
By Brad Witter
Will Smith Reflects On "Horrific" Chris Rock Oscars Slap In First TV Interview
By Sam Ramsden
Get Even More From Bustle — Sign Up For The Newsletter