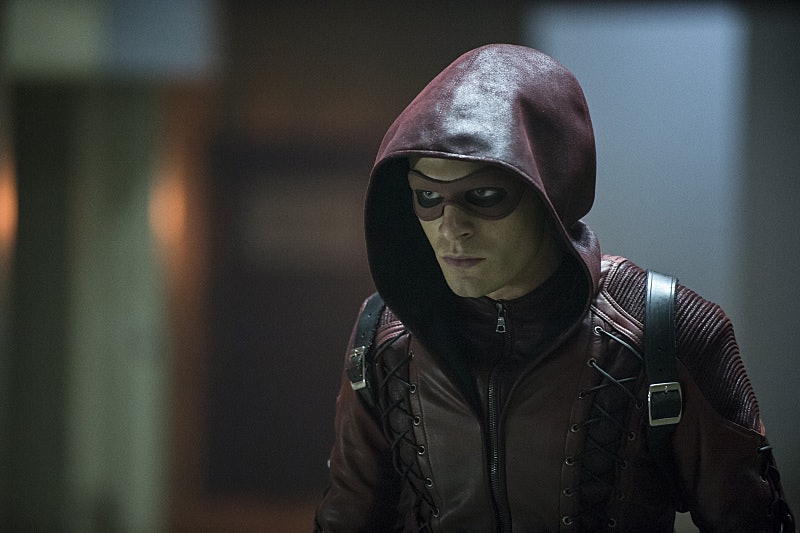 See it's stuff like this that makes Arrow so great. Just when you think you've got a handle of where things are going, the writers and characters throw you an epic curveball that leaves you completely speechless. And that's exactly what Wednesday night's Arrow episode "The Secret Origin of Felicity Smoak" had in store for fans — though the most shocking twist of the night didn't come from Felicity's backstory, but rather a different member of Team Arrow, which was revealed in the last few moments before the closing credits rolled. Roy dreamed that he killed Sara Lance. And I think I speak for almost everyone when I say that practically no one saw something like this coming. But does that necessarily mean that Roy is Sara's killer? If he is, I doubt it was actually his fault.

Just hear me out for a second… We've known for some time now that Roy has been having trouble sleeping. Naturally, there were only subtle references to his problem, so it basically went unnoticed. (We all should've known better.) And it's true, Roy hasn't been looking too good these days, like he's lost focus yet doesn't exactly know why. Well, it might have something to do with the fact that he quite possibly murdered everyone's favorite Canary. (Just guessing though.)

However, this doesn't seem to be something he was even aware of up until this moment, which leaves us with one of three options: either he's faking surprise (which seems unlikely); he's being controlled; or someone's gone to a lot of trouble to make him think that he's Sara's killer. I'm betting it's Option 2, that he did kill Sara, but it wasn't of his own free will. Let's not forget that Roy was once injected with the Mirakuru serum, which has been known to have some pretty powerful side effects. What if it can do more than just make the person superhuman. What if it allows you to be controlled somehow if used properly?

But even if it's not the Mirakuru that's responsible, I'm sure there's some sort of substance out there capable of brain washing someone to do your bidding. And given that I think he's still somehow the ring leader of all of this, I'm guessing it's something Ra's al Ghul would have access to. That would explain why these potential suppressed memories are only starting to come back to Roy now. Maybe the substance's effect is wearing off. I mean, it's not like we've been keeping tabs on Roy this whole time. Someone could've gotten to him and injected with whatever this could be. All I know is that I refuse to accept that Roy chose to murder Sara.

So whether he was compelled into doing this or is being manipulated into thinking he did it, there's no way Roy is a bad guy, right? There's just no way…