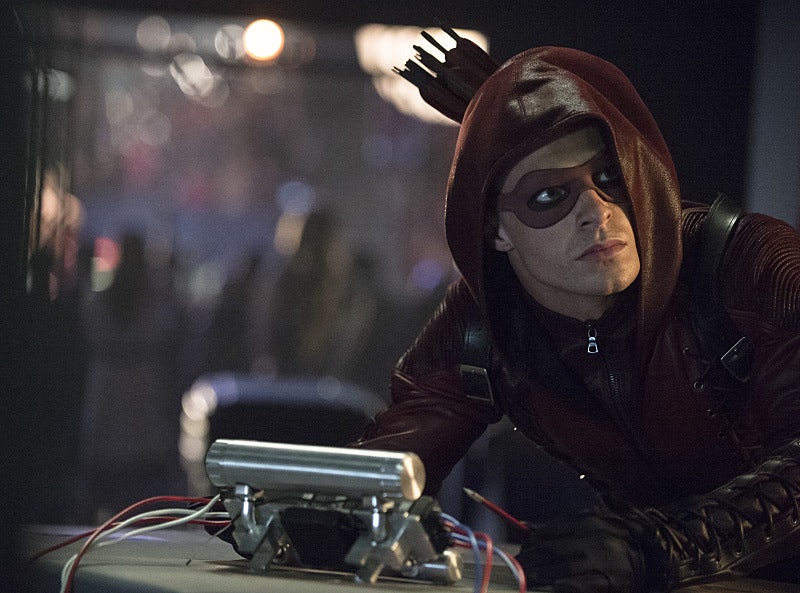 Fans have been waiting — patiently, I might add — for this since the very beginning of Arrow. Considering the expansive backstory, we knew that eventually, Roy Harper would become Arsenal and Entertainment Weekly confirmed that it will finally happen in Season 3 of Arrow . It's almost happened quite a few times, actually, but they were fakeouts, kind of like Oliver telling Felicity that he loves her to trick Slade and no, I'm still not over that. Anyway, back to the Arsenal fakeouts. Thea got the nickname "Speedy!" Ray learned how to shoot a bow and arrow under the Arrow's guidance! He was injected with Mirakuru! All signs pointed to Arsenal, but none of these things actually delivered. Arrow basically dangled the idea of him front of our faces for two seasons. Now, it finally looks like our waiting has paid off. We're getting our Arsenal, and he looks great.

First, let's back up a bit. Who is Arsenal? What's his deal, why does he matter, why are we excited to see him, etc.? To answer why he matters is easy. Everyone on Arrow matters because it's the best show on television, just try and argue with me about it. But here's what you should know about Arsenal before he finally makes his Arrow debut.

First off, let's cover Speedy. In the DC comics, Green Arrow is actually much older than the Oliver Queen we know and love on the TV show. He and Black Canary have a constant on-again-off-again relationship, but usually they're on, and they often look after the younger vigilantes running around the city. Now Roy Harper Jr., an orphan, was adopted by gorgeous billionaire Oliver Queen. Before this, though, he was raised by a Native American chief who taught him how to use a bow and arrow, which made it a lot easier for him to join up with the Green Arrow and start fighting crime under the name Speedy. They're just a regular father and son hooded duo.

So yes, that's why it was kind of a big deal when we learned that Thea was given the nickname "Speedy." There was this momentary flash through my mind of like, what happens if Thea is actually Speedy, and Thea becomes Arsenal? Considering the young age of Oliver, and the addition of a sister, it almost made sense to go this route. Then, Roy was introduced.

Eventually, Roy gets called Speedy, too. I get what you're doing, Arrow, wink wink nudge nudge. But, Roy's quick to tell Oliver, "I don't like that nickname; come up with another nickname for me." This is, sadly, nothing more than a running gag. As executive producer Marc Guggenheim explained to Entertainment Weekly, "When the time is right, eventually the nickname that will stick will be Arsenal. But again the time has to be right."

There's a whole lot of back story about Roy/Speedy falling out with Oliver, and joining up with the Teen Titans, moving to Los Angeles to be a private investigator, and working for the government, but let's gloss over that and skip right to the point where he ditches the alter ego as Speedy, and becomes Arsenal. Roy got addicted to heroin (among other bad stuff) and when Oliver discovered it, he kicked Roy out, leaving him out on the streets. He was never a bad guy, just managed to get himself involved in some bad stuff. After managing to clean himself up (with the help of Hal Jordan — Green Lantern — and Laurel Lance, of course) he took a job as a government agent, but was called back to hero's duty after Batman's Robin stepped down as the head of the Teen Titans. Not wanting to be "Speedy" anymore, Roy adopted "Arsenal." He also ditched his old trusty bow and arrow, and instead turned to more high-tech crime fighting approach. This should be the Arsenal we see in Season 3. Well, aside from the falling out with Oliver, I hope.

I'm just throwing this out there. Roy also eventually becomes Red Arrow. Hal Jordan accidentally calls him "Red Arrow" at one point, and Roy doesn't bother correcting him. He then adopts this new name, since he sees it as kind of a bookend to his troubled relationship with his adoptive father, Oliver. There's nothing that says come a later season, Roy will ditch Arsenal and become the Red Arrow.

In the comics, the storyline of Arsenal relies heavily on the fact that Roy and Oliver have a very troubled relationship. We've already seen bits and pieces of it during Seasons 1 and 2 of Arrow, and I highly doubt we'll ever see a true falling out between them. Every time something has gone astray in their relationship, they've always managed to reconcile. Roy even admits to Oliver that he's the one who saved him, not just from danger, but from himself. Considering Thea is incredibly important to both of them, it's doubtful that the two will have a huge falling out at any point — unless something happens to Thea, but no, they wouldn't do that, would they?

There's also probably a good chance that Brandon Routh's Ray Palmer/Atom will have an impact on Roy/Arsenal, too. At one point Atom is sent back in time to his younger self, and he teams up with Speedy to join the Teen Titans... and you know what? Let's just put our faith in the kind people at Arrow to do what's right for these characters.