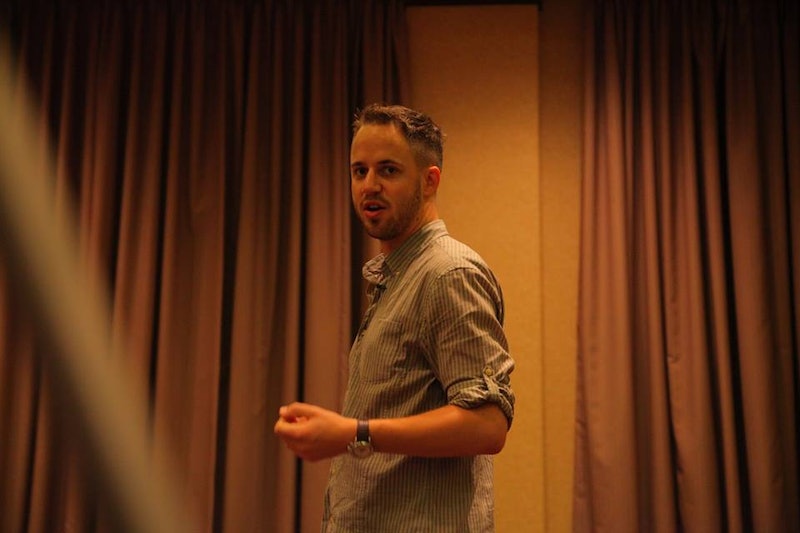 If there is one community of people with no discernible redeeming qualities, it's probably the world of professional pick-up artists. Which is why it's great to see multiple hotels banning pick-up artist Julien Blanc's seminars after a campaign by feminist activists. Sometimes fighting the good fight, mercifully, sees real results. Unfortunately, the pick-up artist in question is so heinously awful it's also hard to be happy about almost anything as long as he has a platform.

Julien Blanc, a self-described "executive dating coach" who also goes by RSD Julien, makes a living off of teaching men how to violate women's boundaries, be sexually aggressive, and manipulate or coerce women into doing things they don't want to do. In other words, teaching men how to be abusive. Under the umbrella of the Real Social Dynamics "dating coach" company (which seems to have a very strange idea of what "dating" entails), Blanc is given a platform to pedal his anecdotes as about treating women badly and have people actually pay to listen.

And when I say "treating women badly" that's actually a pretty big euphemism. Blanc has done things like advocate literally choking women as an opening move. In a video Blanc put out in September, he describes being in Tokyo and going up to random Japanese women, shouting "Pikachu!" and shoving their faces into his crotch.

"When you go to Tokyo….if you’re a white male, you can do what you want," he tells a room full of attentive students while they laugh along and take notes.

It's enough to send you into a rage spiral that may never, ever end.

If you made it all the way through the video, I commend you on your strong stomach. If not, you didn't miss anything that doesn't deserve to be scraped off the bottom of a shoe.

After this awful affront to the human race was translated and posted with Japanese subtitles by activist Jennifer Li, the video went viral. She also started a hashtag, #TakeDownJulienBlanc, in response to his scheduled seminar in Melbourne, Australia. And since one barely needs 30 seconds worth of info on Julien Blanc to become thoroughly sickened, it's not surprising that plenty of people have taken up using the hashtag.

And it seems that all the attention and the pressure activists have been applying has been paying off. After Li started a petition asking venues not to host Blanc, his Melbourne seminar has been booted from multiple hotels.

The campaign against Blanc isn't over — his Australia event seems to have been effectively shut down, but he still has a platform and plenty of guys willing to pay to listen to him spew racist, misogynistic garbage all over the place. And that continues to be a problem worthy of attention.

Still, it's heartening in a world that consistently seems to be populated with awfulness to see awfulness on the run for a change. And it's also worth pointing out that anyone who doesn't believe in the potential power of online activism should take a look at the campaign against Blanc.

Julien Blanc not only feels entitled to women's time and bodies, but heuses his privilege as a white male to assault women in public and then boast about his exploits as a sexual predator. But as infuriating as it is that he exists and makes a living doing this, it's great to know that a group of feminists have taken him down several pegs, and hopefully cost him a good deal of money.

So hats off to everyone who was part of this, especially Jennifer Li for not only kicking off a movement that effectively shut down Blanc's Melbourne events but also seems to have retained her sense of humor throughout.