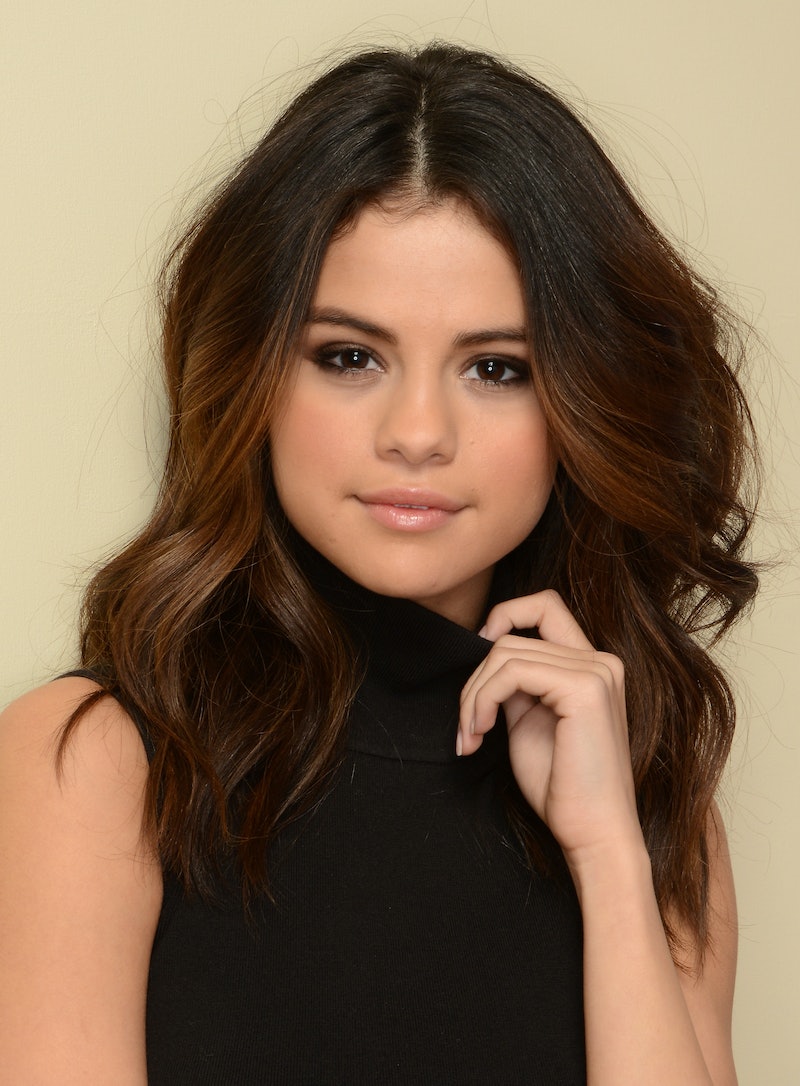 As one chapter closes, another one must begin. And in Selena Gomez's life, her next chapter will be online dating. On Thursday morning, Gomez dropped her "The Heart Wants What It Wants" music video that broke all of our hearts. And made most of us cry — unless you have no soul, of course. The first single off her upcoming greatest hits album, For You, Gomez's new song is obviously about her relationship with Justin Bieber and when the singer stopped by On Air with Ryan Seacrest on Thursday, she didn't deny it. According to the 22-year-old singer's interview, Jelena is over and Gomez might join eHarmony. Did you see that coming?

In typical Ryan Seacrest fashion, he asked Gomez the toughest of tough questions about "The Heart Wants What It Wants" and her relationship with the Biebs. Which, again, so obviously inspired her latest release. But, while Jelena is over, there are absolutely no hard feelings there. The singer told Seacrest, "I support him. I think I always will. I’m upset when he’s upset. I’m happy when he’s happy. I don’t want anything ever to happen to him bad. It hurts me. That’s all," when the host asked about what her relationship with the "Boyfriend" singer was like now. Gomez also revealed during the interview that her new video was shot a year ago and she's since found peace with that tumultuous time in her life.

So, Gomez has put her back-and-forth relationship with the Biebs behind her, she's grown, and she's released this new song as a form of catharsis — what's next for her? Seacrest, in what I'm assuming was a weird attempt at condolences, said to Gomez that he couldn't believe how deeply in love she fell "at such a young age," and asked her what she's going to do with the rest of her life. To which Gomez perfectly responded that she's probably going to join eHarmony next.

Personally, I'm sure there's some guy out there for Gomez that'll treat her right and she'll never have to dive into the world of online dating (it must be hard to do that as a celebrity). But, let's just say the singer did join eHarmony today. Here's what her profile would probably look like.

Sure, Gomez could go with one of her standard, "I'm blowing you a kiss" selfies or one of her many red carpet shots, but this one is well-lit, glamorous, and has a touch of that "come hither" sass that'll rope plenty of suitors in. It's very "Come & Get It," if you will.

The One Thing I'm Most Passionate About:

eHarmony profiles cut to the chase right off the bat these days — I guess less people want to read your lengthy paragraph about your life from birth to present day. So, at this point in Gomez's life, her answer would probably read like this: "The one thing I'm most passionate about is about loving yourself enough to appreciate the breathless moments with yourself and the people you love. I spent a lot of my time loving others and caring about others more than myself, but, when I decided I was ready, my soul said, 'come and get it.' And when I did, I realized that I'd found myself and that I was ready to love life like a love song."

The Most Important Thing I'm Looking For In A Person:

Again, eHarmony really cuts to the chase these days. With no bio to convince potential suitors to contact you, you've got to put exactly what you're looking for in a partner. After her time with the Biebs and all that she's learned, here's what Gomez is probably looking for in a new lover: "It's been like a year without rain for me — I ended up burnt out and emotionally drained. So I'm looking for someone who can make the stars dance for me and who won't tell me that it's wrong, what I'm feeling. Someone who knows who they are because, to me, that's exciting and everything would come naturally. If that sounds like you, come and get it."