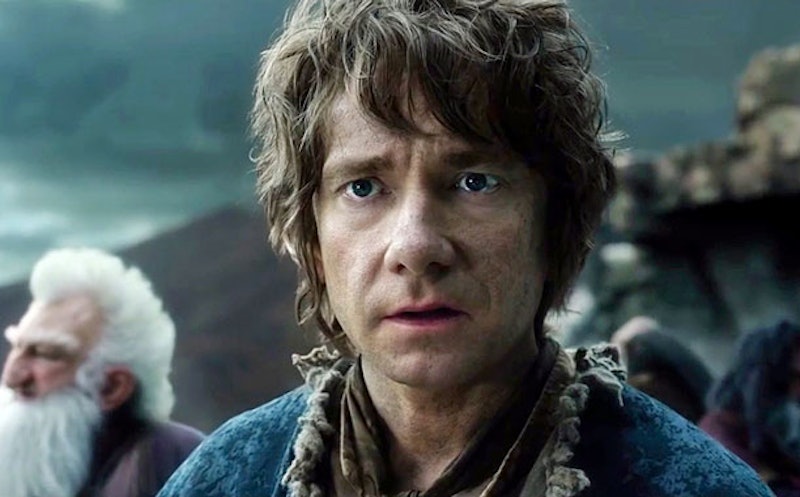 For those of you out there still wondering whether or not the final installation of Peter Jackson's Lord of the Rings prequel has enough plot left to stand up against its predecessors, fear not. The latest Hobbit: The Battle of the Five Armies trailer has been released and proves beyond the shadow of a doubt that the end to this epic trilogy will not disappoint. Just in case the title doesn't give it away for you, battles are raging in Middle-Earth on all sides (five, to be exact) and everyone — hobbits, dwarves, elves, humans, and wizards alike — are ready to take a stand. War isn't just coming, it's here. And fans can expect to dive right into the thick of the action thanks to a certain 45-minute battle scene we've been promised.

It's a double-edged sword, really. As much as I can't wait for The Hobbit 's Dec. 17 release date to get here, a big part of me can't help but feel slightly sad that Bilbo's journey is almost over. Call me a sap, but I'm not quite ready to say goodbye to these characters just yet, especially when one of them comes in the adorable hobbit form of Martin Freeman. (Forget the ring, that is precious.) But end it shall, whether we like it or not. And thankfully it's looking to be the greatest showdown yet.

So just in case you weren't already pumped for this Hobbit battle to commence, here are 11 moments from the trailer that are guaranteed to make you change your tune.

"I came to reclaim something of mine," Elven King Thranduil proclaims. Most likely he's referring to the treasure of Erebor (aka The Lonely Mountain). And something tells me, he's ready/willing to fight for it — even to the death, if necessary.

Granted, it's hard to tell it's them for sure this far away, but usually whenever you see armor-clad figures marching into a fiery cave, it's a safe bet you've entered orc territory. Proceed with caution.

Whenever Legolas Had Screen Time

Will you be my beau (and arrow)?

When We Caught a Glimpse of Sauron

We only just met and he's already asking for a ring. (Stage 5 clinger alert!)

When Gandalf Got Some Love

Time to get up, sleepyhead. There are battles to be won.

Whenever Familiar Faces Popped Up

There's nothing I enjoy more than a good Elf Army synchronization technique.

And thereby give us all the feels.

When Gandalf Delivers Another Iconic Speech

"How shall this day end?" How indeed.

When Bilbo Put a Ring On It

Careful, Mr. Baggins. This may not be the type of commitment you want to bind yourself to.

And for those who have yet to see the trailer or just wouldn't mind watching it again:

Is it December yet?