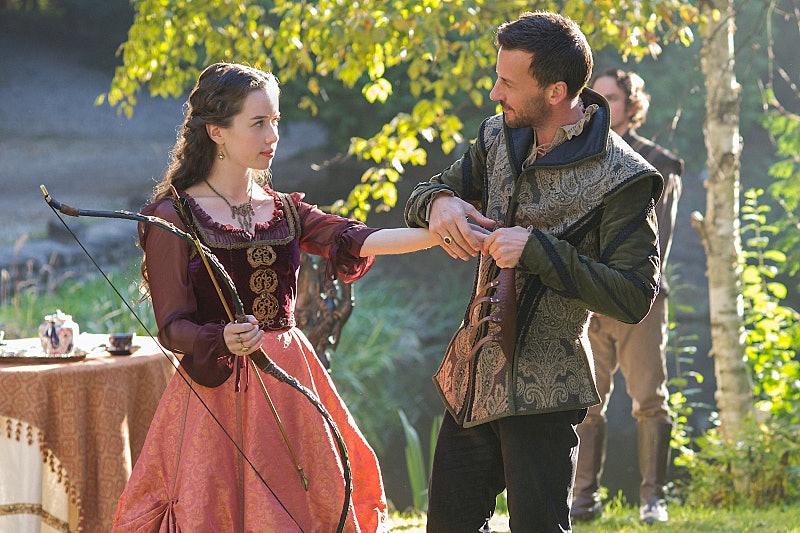 Last week, Reign saw a royal sex diary shake things up. This week's episode, "Three Queens," saw an entirely different kind of drama — less Mean Girls, more Single White Female (When Catherine and Mary's carriage is attacked, they flee and are forced to pose as ladies' maids. They think Francis has come to their rescue when someone announces that the royal carriage has arrived, but it's a pair of imposters who are traveling the countryside pretending to be Mary and Francis. The same ignorance that let Catherine and Mary hide their identities has allowed a pair of con artists to pose as royals). But neither of those movies are the one that you can't stop thinking about watching this episode. That honor goes to Chronicles of Narnia: The Lion, The Witch and The Wardrobe. Why? Because this episode has a total Narnia throwback moment that will have you feeling super nostalgic for your fantasy-world-loving childhood.

Reign star Anna Popplewell (Lola) got her big break playing Susan Pevensie in the Narnia series and this week, she went back to her Narnia warrior princess roots and her Katnissian bow and arrow skills are still in tact, at least in the fictional world. Pretty impressive, considering The Lion, The Witch and The Wardrobe was released way back in 2005, almost ten years ago (not that Anna Popplewell looks like she's aged nearly that much. It's actually kind of insane how similar she looks).

This got me thinking: What if this trend continues and other characters on the show start taking on traits from the actors' past roles? Adelaide KaneNon-Reign noteworthy role: Worthless teen Zoey, The Purge

How a past role flashback would play into Reign: Mary would become really annoying and dependent on Francis, but she would ultimately get him killed. Every decision she made would be willfully stupid.

How a past role flashback would play into Reign: Francis would suddenly be wise and quirky, but more ruthless and shrewd in his leadership of France. He'd be willing to make the tough choices. He would also instantly grow a floor-length beard and start using nonsense words and be locked up under charges of insanity.

Non-Reign noteworthy role: Haldir, The Lord of the Rings

How a past role flashback would play into Reign: At this point, Reign would become a big crazy fantasy party. We'd have Lola as a human who becomes a warrior queen of a mystical realm, Francis as a 90-year-old wizard and Lord Narcisse as an elf. Adelaide Kane wouldn't be able to muck things up enough with bad decisions to ruin how weird the show would become.