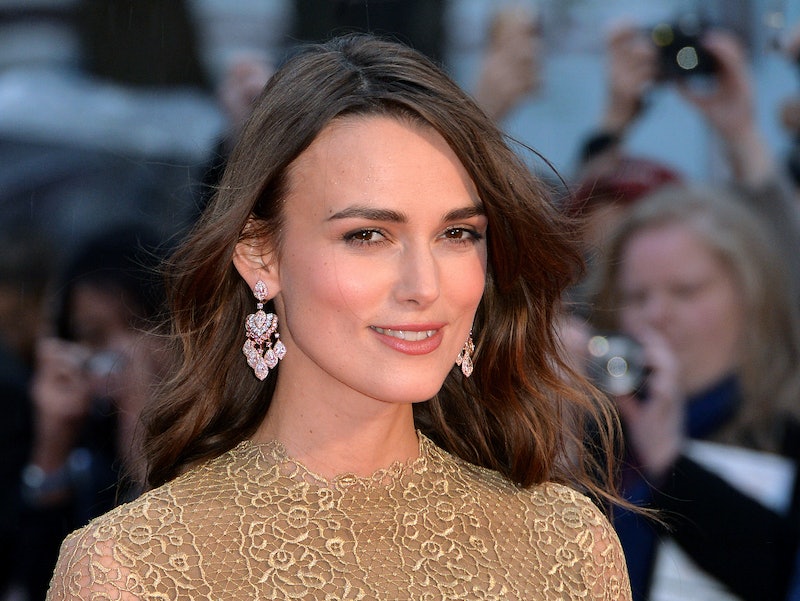 Keira Knightley was totally fine with going topless for Interview. Keira Knightley posed topless for the esteemed mag because... well, why shouldn't she? While so many starlets are (rightfully) freaking out over leaked personal nude photos that find them in various states of undress, Knightley took the power back and was fine with going bra-free and shirt-free for the publication. There was just one Knightley-enacted rule: She would go topless as long as editors promised not to retouch the final photos.

She requested the images be published as-is and natural not simply because she is confident in her beauty but because she wants other women to know that whatever natural shape you are is fine. Go, Keira.

While many celebs pay lip service about being feminist, Knightley didn't even have to call what she did "feminist." It innately is and it's an action, not words, which is empowering.

Sure, haters, skeptics, and cynics might quick to note that Knightley has a figure that many envy, so she can go topless and not worry about needing nips, tucks, color corrections, and what have you. But she is in a position of power because of her celebrity; that is, she can show off her body in a manner in which she controls while sending a message for good. In this case, only agreeing to do a topless shoot if the image was not altered or enhanced put her in the driver's seat.

The English actress is tired of not having control over how she is portrayed, looks-wise, and said, "I've had my body manipulated so many different times for so many different reasons, whether it's paparazzi photographers or for film posters. And that [shoot] was one of the ones where I said, 'OK, I'm fine doing the topless shot so long as you don't make them any bigger or retouch.' Because it does feel important to say it really doesn't matter what shape you are."

The actress has quite a compelling perspective regarding women's bodies and how they are portrayed by the media, in the media, and because of the onslaught of social media, saying, "I think women's bodies are a battleground and photography is partly to blame. It's much easier to take a picture of somebody without a shape; it simply is. Whereas actually you need tremendous skill to be able get a woman's shape and make it look like it does in life, which is always beautiful. But our society is so photographic now, it becomes more difficult to see all of those different varieties of shape."

Big ups to Keira Knightley for her bold statement, both verbal and photographic.