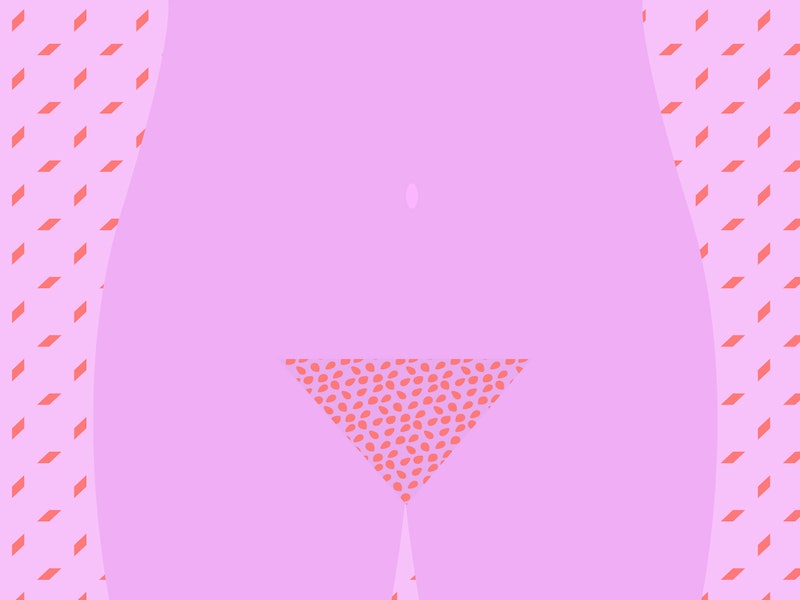 We tend to think that our clitorises are the same as everyone else's clitorises, and leave it at that. After all, how much variation can there really be in such a tiny nub — and who has time to worry about stuff like that? Chances are, most of the anatomy-based time you have marked off in your schedule is already occupied with showing a partner how to touch your clitoris, or figuring out how to touch yourself in order to reach orgasm. Add in the fact that you theoretically must show up for a job or interact with your family, and it doesn't leave most of us very much time to squat over a mirror and ponder the unique attributes of your little man in a boat. Plus, don't you have to change your name to Moonrise Sunflower Shasta Wickerbasket if you're going to start squatting over mirrors?

But paying attention to your clitoris can have more benefits than just connecting you with your inner moon goddess. Like pretty much every part of the human body, clitorises vary in shape, size, and many other factors that can have real-life effects on your ability to orgasm from various forms of stimulation. Have you ever tried "no fail" clitoral stimulation tips only to find yourself banging your vag against a wall in frustration, because the tips totally failed? If you thought the problem was you, you're not alone — but you're also wrong.

Lots of sex tips are built around the idea of an "average" clitoris — and though many women have bodies that respond well to those tips, many of us don't benefit from the approach of one-size-fits-all sex tips. One of the many reasons why? The subtle but important variations in the shape and size of our clits.

So how do the different shapes, sizes, and even ages of clitorises change the best approach for having an orgasm? Find out below, in probably the only clitoris article on the Internet that promises not to use the phrase "exquisitely sensitive" (ewwwwww).

Clitorises are mostly internal; the part of the clitoris that's submerged within our body is comparable in size to a medium zucchini — but about 1/4 of it is visible externally, with the average adult clitoris size 1.5-2 cm in length, and a little bit under 1 cm in width. While it hardly seems like size would matter, a recent study published in the Journal of Sexual Medicine actually found that many women who had rarely or never had an orgasm had clitorises that ran on the smaller side, independent of their body size or other factors.

Dr. Susan Oakley, the researcher who conducted the study, speculated that the greater visible mass of a larger clitoris made them easier to orgasm with. "Perhaps a larger clitoris has more nerve endings, and perhaps with direct contact and stimulation the clitoris can have more sensation, resulting in orgasms," Oakley wrote.

So it's not that larger clitorises are automatic orgasm machines — there's just more surface area to work with. So if your clit is on the smaller side, know that it might take you more time/effort/focus for you to have an orgasm than your larger-clitted sisters, but that it's far from impossible — it just takes a little elbow grease.

Are All Clitorises Located In The Same Spot On Women's Bodies?

Of course, either way, most women don't orgasm from penetration alone, and a lot of us can only get off with special, focused attention on our clits. If that's you, don't be ashamed — embrace it (and embrace your clitoris, literally. Cliterally? Sorry).

What's The Deal With Clitoral Hoods?

The clitoral hood is a fold of skin that covers the clitoris and protects it from being aggravated by friction and other hazards of life in your nether regions. But clitoral hoods vary wildly in coverage — though most medical drawings depict women with small clitoral hoods, this (NSFW) chart of clitoral hood variations shows that they run the gamut from barely there, to hoods that cover the full clitoris, and even a bit of the vulva.

I haven't found much research about how the size of clitoral hood can affect orgasms, but I can weigh in with one woman's experience — my own. I have a hood that covers every millimeter of my clitoris, even when I'm wildly turned on, paired with what at least feels like a pretty small clitoris (due to my hood sitch, I have never actually seen it —but I'm pretty sure that it's in there. Some folks refer to it as a "recessed" clitoris). Throughout my life, this has effected my sex life and my ability to utilize sex tips directed at the "average" woman. I don't feel very much sensation when oral sex is performed on me, and I need a back massager's worth of pressure to have a manual orgasm when I'm with a partner.

But life with my unique clitoral configuration isn't all drawbacks — the friction between the hood and the clit helps me orgasm in record time once I get going. So there's no reason to freak out if your junk doesn't look like a health textbook drawing or your clit doesn't respond to things that "everyone" is supposed to like sexually (as I spent many, many years doing). A little experimentation can help you figure out the unique pluses of your specific situation.

Can You Wear Out Your Clitoris?

I've definitely put about 10,000 hours into flicking my bean — which technically makes me a Gladwellian genius at it — but it has also occasionally given me pause. Have I worn out my clit? Am I on the road to wearing out my clit? Is that even possible? Thank god, it isn't — clits don't go numb from a lifetime of wear and tear or become less sensitive in any way. Actually, aging is only a plus for clitorises — because your clit keeps growing throughout your life. Your clit begins growing at the start of puberty, and by the time you turn 32, your clit is roughly four times the size it was when you hit puberty. (Thanks Mother Nature!) Dont worry — it won't, like, start hanging out of the bottom of your shorts or anything. But it might give you a little more surface area to work with, which may also increase your odds of orgasming in any given situation.

Are There Any Non-Sexual Things That Can Help Your Clit Get Ready For Action?

Yup, exercise. Bananas, right? But actually, it makes sense: Clitorises get engorged with blood when you're aroused, and since exercise stimulates blood flow in the soft tissue, exercise can also help your clitoris become more engorged, and thus more sensitive, if you get turned on soon after exercising. In fact, only 20 minutes of moderate exercise can increase clitoral engorgement by up to 168 percent — and that increase lasts for hours afterwards.

Will this be the fact that gets me to the gym for the first time in about a year? Stay tuned and find out, folks. Until then: goodnight and good clit.