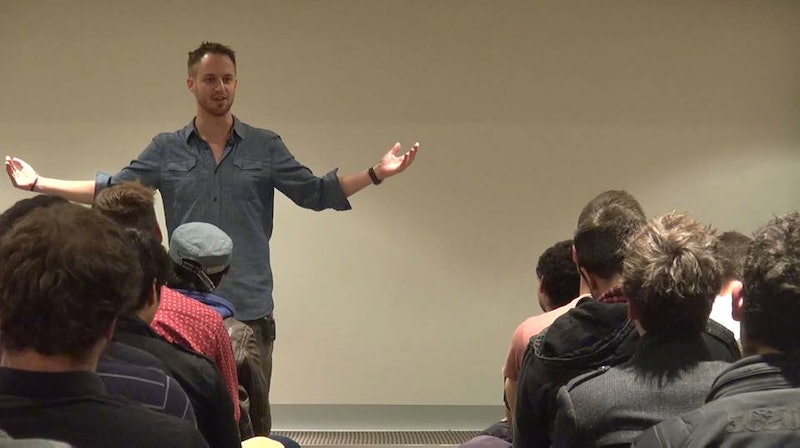 At this point, most any decent person who has heard about pickup artist Julien Blanc can recognize him as a despicable racist, sexist, abusive asshole. But it seems that Blanc's fans have their own interpretations for the backlash against him. And unsurprisingly, their interpretations are pretty awful.

Outrage against Blanc has been building ever since a video of one of his seminars — in which he describes approaching Japanese women in Tokyo, shouting "Pikachu!" and shoving their faces into his crotch — was translated in Japanese and went viral. Activist Jenn Li started a Change.org petition to cancel Blanc's Australian events, along with the hashtag #TakeDownJulienBlanc, where activists have been speaking out and organizing against him.

And the good news is that these efforts have been largely successful so far. Blanc's seminar was rejected by multiple hotels, and his Australian visa was ultimately revoked, forcing him to leave the country. Li also reports that many of the videos posted by Blanc and other pickup artists promoted by "dating coach" company Real Social Dynamics have been taken down or made private.

All of which pleases the decent humans of the world and rather displeases Blanc's fan base. And where do pissed off dudes go to vent their misogyny and hatred of the International Feminist Conspiracy™? To Reddit of course. Specifically to The Red Pill subreddit, bastion of the Men's Rights Movement and general harbor of sexist garbage.

Reactions to the news range from the dismissive to the outrageous to the just plain confusing (seriously, some people out there need a refresher course in proper sentence structure). Here are some of the most outrageous reactions The Red Pill had to offer.

The Guy Who Thinks This Is Great Publicity

Actually, the hope that outrage and backlash will only raise Blanc's profile is a common theme on the subreddit, but this commentor takes it a step further by claiming it's good publicity because the backlash shows Blanc's methods are "effective." In what universe?

Yes, the girls, they just go crazy. That's exactly what's going on here. Seriously, what universe are these people living in?

The Guy Who Smells A Conspiracy

Yes, the only reason we women could possibly have for not wanting men to grab us and shove our faces into their crotches would be because it means men will no longer have to put up with bullshit from us. Not because that move is bullshit, no that's just crazy talk.

Yep, he definitely has us figured out. When we say, "This thing that you are doing is abusive and unacceptable," what we really mean is, "That's totally hot."

This Guy Who Thinks the Social Justice is the Scary Part

As if the fact that he thinks the activists are the scary part of the saga wasn't already an indictment on his judgement, he also thinks Blanc's antics are something to "laugh off."

This Guy Who Says It's Cool Because "White Fever"

And that hot mess of racism and sexism is about all I can take.