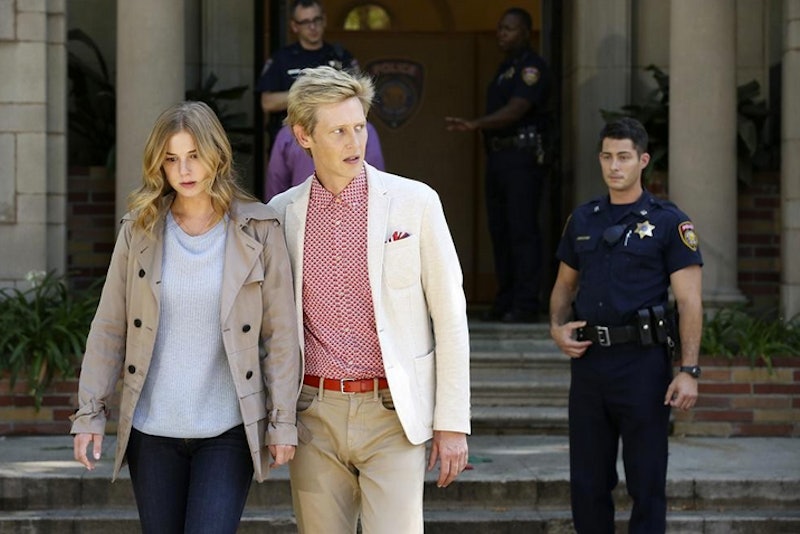 Four seasons in, and I cannot stop watching Revenge . Emily Thorne still has me in her grasp, Emily VanCamp's lioness stare compelling me from week to week. Her relationship with Gabriel Mann's Nolan Ross? Gold. The questions of justifiable cruelty and forgiveness present in the waiting game taking place before her reunion with her father? Intoxicating to those of us who've stuck with the show this long.

A soap is a soap is a soap, it could be said. But there is something in me that just can't quit Revenge no matter how I try. To be fair, I haven't tried very hard: I really need to see how this thing with David Clarke wraps up, and I have committed too many hours to Emily Thorne's twisted plans to stop short of seeing her fulfilled.

But there are a few things I really need from Revenge Season 4.

A New Focus For the Victoria/Emily Relationship

They're mortal enemies, and for good reason. But their back-and-forth wanders around this show aimlessly, and there's a very tricky element here: They've worked hard to develop both Emily and Victoria as complex antiheroic women, and so it's clear they're hesitant to paint either of them too far into the hero or villain realms their stories could often delve into. It could behoove them to find other ways for Victoria and Emily to interact with each other — they hardly have to be chummy to, say, decide to work together to take down a common enemy or save a common loved-one (David? Charlotte?). This show's three seasons in, and I am dying for these women to discover new ways to relate to each other.

Other, than, you know:

These three interacting were the best part of that great first season, and their time together has remained one of the most grounded, emotionally fulfilling parts of the show. So why do they interact so infrequently? Two out of three we get on the regular, but c'mon — we need the OT3.

A Return Of Nolan's Bests

There's been a lot of good and a lot of bad in Nolan Ross' past: Lost loves Marco and Patrick were two of the good. This season is still waiting for an overarching Nolan story arc, and my suggestion lies in one (or both!) of these loves returning. The last time we saw Marco he was leaving Nolan because of his loyalty to (thought-) terrorist David Clarke; now that David's alive and (reasonably...) well and proven innocent, it'd be interesting to see Marco make a comeback and confront that little judgment of his. A return from Patrick could also lead to some interesting things: It'd give Victoria something to focus on other than David, and if his return coincides with Marco's then we could have one of the most Sophie's Choice love triangles in recent memory.

An Actual Motivation For Charlotte

Rarely have Charlotte's motivations made sense in the past season. Why exactly did she feel the need to try to MURDER her sister? Just cause she was a little mad? No one knows! The reason may be scribbled on some writer's room drawing board somewhere, but it did not trickle down effectively to the audience at large. We need some reason other than "we need Charlotte to be mad right now for the plot" as a motivation; she deserves more as a character, and so do we as people who've stuck with the show.

A Trimming Of the Fringe Characters

I didn't really think I'd ever miss Ashley as much as I do, but she represents a time when the show only had one fringe character taking up way too much space — maybe two if you count poor Declan. The show's never exactly weaned itself off of that, but it's certainly weighing down this season, and sometimes it feels like the presence of these characters is just stealing time away from the intriguing character drama this show could be if it really wanted to.

An Understanding Of Who Daniel Is Now

Is he an '80s-villain like he turned into last season? Or is that poet boy we met in flashbacks in Season 1 still in there? Both Charlotte and Daniel could do with some deep existential rebooting — they've got to choose between coming out the other end as mini-versions of their parents or as their own, more evolved people; having both might be too much.

This one is, for me, perhaps the most crucial question of this season: How will David finally really reunite with his daughter? They've been teasing it since the cliffhanger in last season's finale, and with every new episode where it doesn't happen the pressure builds: What will it be like when they finally face each other as they really are? There are a lot of cop-outs available here, but I'm really hoping Revenge is as invested in this as its audience is — invested enough to actually follow the rich character paths they've set down for these people to their logical conclusions. If there's one character this show can't afford to lose track of it's Emily Thorne, and a lot of that hinges right now on how they choose to deal with her re-meeting with her father. Who knows, we may actually get to see this one this Sunday.