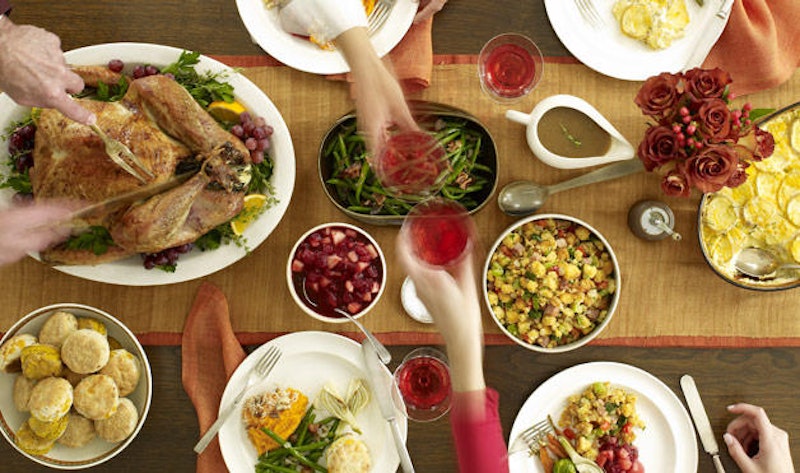 We all know that Thanksgiving dinner is an endurance test — not in terms of how much pie you can cram into your gut before unbuttoning your skinny jeans, but in terms of how long you can put up with your family’s clashing personalities. Our families are weird, and sometimes infuriating, but that’s why we love them more than we love our books. Right?

True, life may be stranger than fiction, but fictional families are a source of endless wonder. These mothers and daughters and brothers and sisters can cut us as deeply as our own kin do; they can frustrate and thrill and inspire us, exerting an emotional influence perhaps surpassing the shaky connection we feel to our far-away cousins. And I often wonder what becomes of these remarkable fictional relationships after I've finished the last page. Like J.D. Salinger’s brilliant Glass children: Did Franny and Zooey continue their philosophical conversation, or was this intimate moment a one-time deal for the otherwise uninterested siblings? Did Franny go back to school at her brother’s urging? Did she get back with that dick Lane?

In honor of this familial holiday, I’m answering these questions for myself, imagining how Thanksgiving dinner may ensue for five seminal literary families. No matter how Oscar-worthy you think your own dinner table drama may be, I can at least assure you there will be no throwing of offending members from the top of Mount Olympus. (Probably.)

That’s what you get for giving birth to the goddess of youth: she may be the very picture of health and vigor, but you can’t count on her to keep track of anything. Responsibility is something she will literally never learn.

Hebe glides into the dining room, her seasonal wreath adorned with chrysanthemums to match the cornucopia embellishing the marble table. The young goddess offers her mother an aperitif before taking her seat — either as a peace offering or out of habit — and Hera accepts the gilded cup. The mother of the gods takes a cautious sip (you can never be sure your children aren’t out to poison you) to discover a sweet blend of nectar and ambrosia. Again. Can’t credit the girl with innovation, but she’s just too adorable to stay angry at.

“Ask your sister, Eileithyia. She should be done giving birth for the day,” Hera suggests. “I would help you look, sweetheart, but you know your brother has cursed me to this throne for all eternity.”

Hera wiggles vainly in her seat and shrugs: see? No dice. “And all I did was shove him off the mountain. That’s what you get for being so damned ugly.”

“Quite right, dear,” Zeus responds, wiping his hand roughly over his mouth after a Titan-sized swig of ouzo. “We are gods, after all. We have a reputation to uphold. How dare Hephaestus try to get away with a mug like that? And then be such a pansy after being punished for it?”

Hera shoots Zeus a vicious side-eye as their remaining hordes of celestial children stream into the dining room (no half-mortal bastards allowed tonight, Hera had warned her husband). “You don’t get to butt in, Zeus. I know what you did with that floozy Io.”

Once the scores of deities have settled into their seats, talk of business inevitably ensues. Gods have a harder time relaxing than you might think: as the very embodiment of their vocations, they seriously struggle to separate their home and work lives. Ares and Eris engage in their usual game of who's destroyed more cities the most violently; Angelos broods in her black sheep rebellion, plotting an early escape back to the Underworld; and Apollo and Athena compare their latest mortal conquests. Over the mellifluous din of her children's chatter, Hera summons a servant to ensure the consorts for the post-dinner orgy are all oiled up. Beside her, Hera feels Zeus sitting up a bit straighter.

"You," Hera turns to her husband once she shoos the servant away, "are sitting this one out. You've gotten enough ass to last you another eon."

Queen Gertrude is exhausted before dinner even begins — another epic struggle to pull dear Hamlet out of his pitiful little room. (Hamlet had insisted on occupying the smallest, darkest chambers in the castle — and what little light did stream in through the small casement window, he’d suffocated with heavy velvet curtains perennially drawn.)

Ever since this unfortunate death-and-marriage business, Hamlet’s been so whiny. It’s not just his philosophizing that’s wearing Gertrude’s finely honed patience down to a gilded thread — that’s always been Hamlet’s way — but he’s been downright erratic ever since the wedding. I mean, what’s all this business with not going back to school? And very rudely accusing his new father of being an “intruding fool”?

Now, slumped in his chair across from Gertrude like a boy 20 years younger than his deceptively advanced age (and just when is he marrying that sweet girl Ophelia?), Hamlet picks at his turkey leg sadly, utterly ungrateful for the lavish spread he’s been served. He pays no attention to his school chums (Rosenberg and Goldfarb? Rosenbaum and Goldenblatt? And who is who?) twittering nonsensically to his left between greedy shovelfuls of gravy-and-mash. They don't even shut their gobs when Claudius clears his throat, taps away at his ruby-encrusted goblet, and stands to make his commencement speech. How regal, Gertrude thinks, gazing lovingly at her new husband. Just like a real King.

Hamlet sighs into his third glass of wine of the night, just loud enough for the subjects at the far end of the table to glance back at their Prince worryingly. This is going to be one hell of a night, Gertrude concedes. And what was that terrible groan from beneath the floorboards?

THE BENNETS, PRIDE AND PREJUDICE BY JANE AUSTEN

“Where in the name of the Lord is that foolish child?” Mrs. Bennet wonders irritably before realizing she’s said it aloud.

“Just give her a bit of time, dear,” Mr. Bennet responds, between fragrant puffs on his pipe, from his very comfortable chaise lounge in the hearth-warmed parlor.

“No, I’ve just asked Lucy to fetch her and she isn’t in her room,” Lydia chirps, taking her customary seat at the table to the right of her mother. “Maria Lucas told me she’s seen Lizzie and that incorrigible Mr. Darcy strolling in the park together. Maybe she’s gone for a secret rendezvous.” She chuckles eagerly in Kitty’s general direction, hoping to get a reaction out of her sister who absently reaches for a buttered bun.

What a dud. Lydia rolls her eyes to her mother, who snatches the biscuit out of Kitty’s sticky fingers.

Mr. Bennet gingerly rises from his chaise and makes his way into the kitchen, premeditating his wife’s hawkish demands to join the family (or what’s left of it, anyway). Once finally seated, the Bennets jump at the sudden slamming of the back door. Mrs. Bennet clutches at her rapidly coloring throat.

“Please excuse me,” Lizzie exclaims as she strides into the dining room, pulling off her gloves and vainly smoothing her hair. “I was just out for a walk…”

“Sit down,” Mrs. Bennet commands her second-oldest, most difficult child (not counting Lydia, of course, the heartsick fool). “Mr. Bennet,” she turns to her husband, whose waistcoat she discovers is stained with a glob of tobacco, “would you please commence carving the turkey?”

Mr. Bennet groans out of his second chair in as many minutes, accepting the carving knife offered by a young maid who’s seemed to appear out of the very ether.

“Mary? What are you on about?” Mr. Bennet furrows his brow, wielding the knife mid-air.

“Ugh, Mary,” Lydia groans. “We always forget about her.”

“What’s that on your dress, Franny?” Zooey asks his sister from his spot before the hallway mirror. He turns his face 45 degrees, runs a finger along his sharp jawline, smoothes his slick golden side part. He turns away from the mirror, mildly disgusted, and joins his little sister in the dining room. Bessie scurries around the table, still clad in her ridiculous house kimono, humming “Alexander’s Ragtime Band.” She sets a basket of Pillsbury rolls and a jug of 7-Up on the table, patting a taciturn Waker on the head before heading back into the kitchen. Something’s burning in there.

“What do you mean, Zooey? The pin?” Franny asks sheepishly, taking a seat between her two smartest brothers.

“Yeah, the pin.” Zooey reaches across the table and pokes the offending accessory. “Looks suspiciously like a college pin. Like something that phony Lane Coutell might give a Smith girl.”

Franny swats Zooey’s hand away, looking to Buddy — her wisest remaining brother — for help. He shrugs: he’s sitting this one out. Maybe he’ll narrate it at a later date.

“Well, I don’t know,” Franny sighs, turning back dejectedly toward Zooey. He really is handsome; sometimes she forgets just how beautiful he is, when he’s being so mean. “I thought about it, after we talked, you know? And I realized that Lane really loves me. And nothing’s more important than love, right?”

Boo Boo enters from the kitchen, one of her little rascals clinging to her leg. Zooey jumps: he still half expects to see Walt gliding through the kitchen door, gnawing on a stolen slice of pumpkin pie. Or Seymour, gnawing on some brilliant theory, something beyond the rest of the Glass family’s limited reach. Instead Bessie follows in Boo Boo’s wake, setting a frothy sweet potato casserole on the table. Franny’s astonishingly blue eyes widen, and she reaches inelegantly over Waker, digging into the dish with a silver spoon.

“Hey, hang on there, Fran,” Zooey warns with a sharp look. “Save some for the Fat Lady.”

VLADIMIR AND ESTRAGON, WAITING FOR GODOT BY SAMUEL BECKETT

A country kitchen. An oven. Evening.

Estragon, sitting in front of the oven, tries to undo his tie. He fiddles with the knot, but it’s become more knotted than before. He gives up, rests, tries again. He opens the oven door, checks on its contents, closes the door. Vladimir enters.

“Nothing to be done,” Estragon says.

“I’m coming round to that opinion,” Vladimir responds. “You put the turkey in, you wait. You try to be reasonable. You wait. But it’s a struggle. How much longer do we have to go?”

“Not long now,” Estragon says, resuming the business with his tie. “I’m glad to see you again. I thought you were gone forever.”

“I was just peeling the potatoes. But I thought I’d be doing that forever, too. Let’s celebrate.”

Estragon gets up from the kitchen floor, and the two men embrace.

“It’s for the casserole,” Vladimir responds. The two men stand in silence. Estragon sits on the floor again, opens the oven door, checks the turkey, closes the door.

“What do we do now?” Estragon asks.

“Yes, but what do we do while waiting?”

“We could hang… a festive wreath on the door.”

“Yes. And we do have a lot of time to kill,” Vladimir agrees. “You go ahead first. I’ll keep an eye on the turkey.”

“No, no, you go ahead,” Vladimir asserts. “I’ll wait here for the turkey.”

“No, I insist,” Estragon says, rising from the kitchen floor. “You hang the wreath. You’ll do it better than I can.”

“Hang on, Didi,” Estragon catches Vladimir’s arm before he leaves. “What are we waiting for?”

Vladimir pauses. “For the turkey, of course.”

“The turkey! Tied to the turkey!” Estragon says despairingly. “But what if the turkey is never ready?”

More like this
16 Novels That Paint A Realistic Portrait Of Abortion
By K.W. Colyard
18 Father's Day Poems That'll Make You & Your Dad Tear Up
By Michelle Regalado and Siena Gagliano
21 Funny Memes To Text Your Dad On Father's Day
By Chelsey Grasso, Syeda Khaula Saad and Siena Gagliano
Ottessa Moshfegh Is Happy To Be Your “It” Girl
By Arya Roshanian
Get Even More From Bustle — Sign Up For The Newsletter