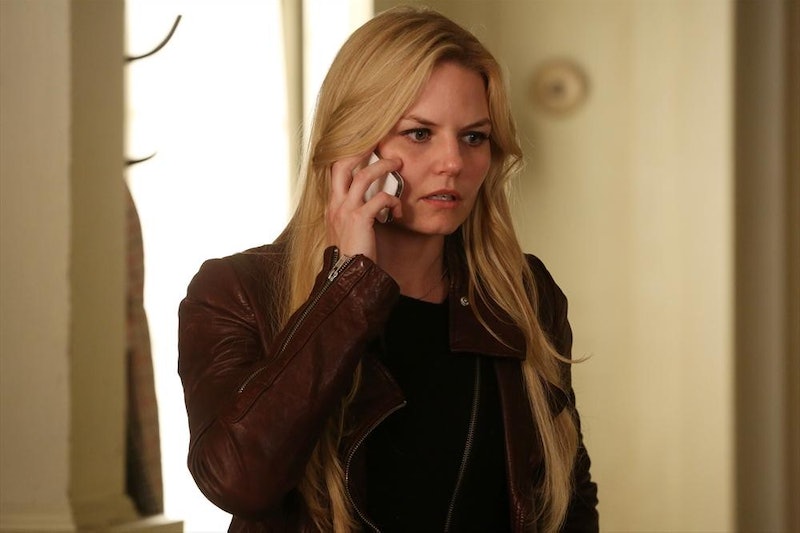 Have you seen Frozen? At the very least have you heard "Let It Go"? OK, then you're ready for what I'm about to tell you — Once Upon A Time has officially gone full-on Frozen as of Sunday night. You might want to argue that Season 4 has been in Frozen territory since its premiere, but the series has officially taken on Frozen's storyline as of the episode "The Snow Queen." Here's the deal — Emma can't control her powers on OUAT and she's started hurting people and scaring her family, just like Elsa before she ran away in Frozen. Expect Emma's not running away — at least not physically — and the promo for next Sunday's episode of OUAT revealed that Emma's going to give up her powers. And, well, that's obviously a very, very bad idea.

First of all, Emma's not The Snow Queen or Ingrid or whatever her name is today — even if Emma did let Ingrid manipulate her at the police station. Emma's always had her powers and she's always had a strong support system behind her, which included her parents who've thought it's just peachy that their daughter had magic. Sure, she made a baby bottle boil a bit on Sunday night and when people pushed her — like Anna did to Elsa in Frozen — Emma accidentally, in her overwhelmed and frantic state, kind of hit David with a lamp post. It's getting out of control, but that's really not Emma's fault.

Ever since Ingrid and Elsa came to Storybrooke and Regina decided to sit this battle out to nurse her broken heart, Emma's been called to arms when she wasn't ready. She's had to use more magic than ever and significantly more powerful magic without anyone guiding her or helping her understand how to control it and not be consumed by it. It was so hard for her to get her magic to work in the first place and now that she has — out of desperation, mind you — it's completely out of control because she never really learned to use it properly.

OUAT is trying to paint Emma as a modern-day Elsa from Disney's Frozen — she's got uncontrollable powers, she's hurting people she loves, and she's scared that everyone is scared of her. But Ed Kitsis and Adam Horowitz are forgetting one important thing — Emma was forced into this position. Unlike Elsa, who spent her whole life trying to hide these powers that no one wanted her to use, everyone needs Emma to use her powers to save them. I really hate that I'm going to say this, but I agree with Ingrid — everyone needs Emma to use her powers, but no one intends to try to understand how she could be overwhelmed right now.

Ingrid's toying with Emma's emotions and manipulating her into fearing everyone she knows and the whole town is relying on her to save them from Ingrid. Things are delicate and Emma's being pushed to her magical limits with, again, no training or guidance. No one should be pushing her to get rid of her powers, instead, someone (*cough* Regina *cough*) should try to help Emma and explain what's going on.

I'd like to see Storybrooke's residents survive one day without The Savior. Seriously, I dare them to try it before they guilt Emma into drinking a potion that'll take her powers away.

More like this
Vanessa Hudgens Proves She's Always A Wildcat At This 'High School Musical' Location
By Alyssa Lapid
'Criminal Record' Is The 'Doctor Who' Reunion We’ve All Been Waiting For
By El Hunt
Emilia Clarke Shares More Details About The New 'Game Of Thrones' Series
By Maxine Harrison
“The Door Is Always Open” For Another 'Breaking Bad' Spin-Off, Says AMC Boss
By El Hunt
Get Even More From Bustle — Sign Up For The Newsletter