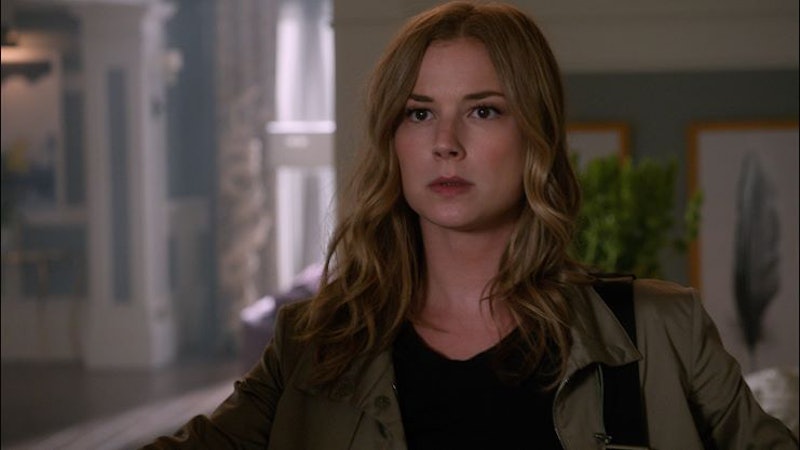 The big moment finally arrived and only lasted for about two minutes. I've been waiting all season for Emily Thorne and David Clarke to reunite on Revenge, and during Sunday night's new episode, "Ambush," it finally happened. It was all emotional, music swelling, tears flowing, and perfect by Revenge standards, even if it didn't last as long and three seasons' worth of believing David was dead deserved. Yes, people, after all of this time, Emily and David reunited on Revenge Season 4 and it was promptly ruined by Victoria Grayson. Because, of course.

Personally, I think it took Emily way too long to confront her father — I mean, he tried to kill her because he didn't know who she was. AND he came to her to discuss the fake Amanda Clarke. I obviously understand why Emily was weary about revealing herself to this man she hardly knows, especially when he'd been alive the entire time she was exactly revenge on his behalf. But, on Sunday night, Emily finally got the push she needed to confront her father about what she's been feeling since his return to the world — hurt, anger, and crippling confusion. I mean, she spent years of her life trying to clear his name and avenge his death and he's been alive this whole time? It'd be weird if Emily wasn't feeling those things.

After Emily broke into David's safe deposit box with the help of Nolan, she found that David had been lingering around the Hamptons, following the wrong Amanda all of these years. And, naturally, that made her go totally nuts because, again, she spent her entire life, lost the love of her life (RIP Aiden), and risked her sanity to avenge David's memory. The least that guy could do would be to realize what he real daughter looked like. I mean, c'mon. So Emily stormed into David's new house, brandishing the photos of the fake Amanda, and screaming questions at him about why he didn't come looking for her and how he didn't notice who she was. It was actually really sad, even if it seemed like Revenge drew out their reunion for as long as possible.

David recognized the scar on Emily's wrist and that was it, father and daughter reunited in the Hamptons, in the same place where they lost one another. But it didn't really go as Emily planned — as they finally embraced for the first time, Victoria got electrocuted as she was trying to escape from the house. And, even though he was with his daughter for, again, the first time in decades, David Clarke ran to Victoria's rescue as if Emily hadn't just revealed her filthiest lies.

Maybe a happy reunion isn't in the cards for David and Emily after all and that's why he never came looking for her? The only thing that's abundantly clear right now is that David is not going to get rid of Victoria and Emily's just going to have to deal with that if she wants to be with her father.