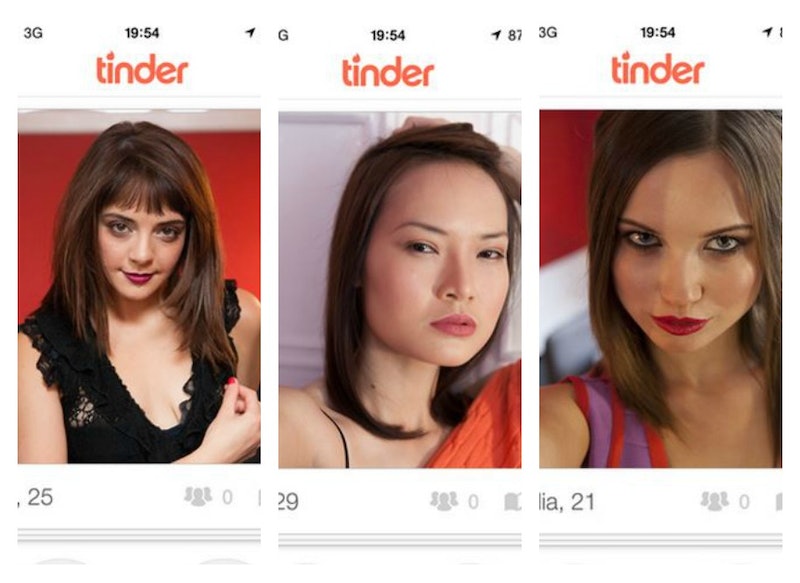 It’s pretty well acknowledged that not all online dating profiles actually belong to real people; not all fake profiles are scammers, though, and these particular fake profiles might be worth a moment of your time. In conjunction with the Immigration Council of Ireland, ad agency Eighty Twenty recently launched a campaign in Ireland geared towards raising awareness of sex trafficking — but you won’t see it in the places you’d normally expect. Instead, you’ll see Eighty Twenty’s sex trafficking awareness campaign on Tinder.

A large number of fake Tinder profiles with their locations set to places in Ireland have been created for the campaign; the message they send, however, is anything but fake. As users swipe right through each “profile,” the photographs become more and more unsettling; the last two swipes finally reveal the true nature of the “profile,” putting forth messages like “Your options are left or right. Women forced into prostitution in Ireland have none.” The last screen directs users to the website Turn Off the Red Light for information about how they can help combat sex trafficking. Although the actual images featured in each “profile” are of models, the stories contained within them are those of real sex trafficking victims.

Said performance marketing and data director Cathal Gillen on Eighty Twenty’s website, “This is the first use of Tinder in Ireland for a campaign of this nature and one of the first globally. Tinder has become an extremely popular app in Ireland, and it provides us with a unique, innovative, and standout way of communicating to men the issues faced by women involved in sex trafficking.” The agency’s blog post about the campaign noted that it is been “very well received by users of Tinder, with a large number of comments from users who are shocked upon hearing about the realities of sex trafficking in modern society.”

Not everyone is convinced of the campaign's efficacy. For example, wrote Katie Sola at Mashable, “It's been reported that prostitutes use the app to find clients, but the app is meant to be used by people who are looking for relationships or sex with no money involved. Is Tinder the right place to find the men targeted by this message?” Similarly, The Daily Dot’s EJ Dickson noted that the campaign was a “savvy advertising tactic,” but also questioned why the choice was made to use Tinder to launch it: “Is there an implication here that sex trafficking is taking place on Tinder, or that users looking for a quick hookup are somehow directly responsible for the fate of the women in the ad?”

According to Cathal Gillen, the usage of Tinder has one purpose and one purpose only: It’s an easy way to spread the message to a huge group of people incredibly quickly. Wrote Gillen in an email to Mashable, “We are not saying sex trafficking is taking place on Tinder, we are using it only as a communications vehicle.” Furthermore, said Jerry O’Connor of the Immigrant Council speaking to Mic, “It is our policy to constantly explore all forms of media to help us reach new people to raise awareness, and this particular project is very much in line with that approach.” According to the Independent, Tinder had approximately 275,000 Irish users as of April, with the numbers growing every day; with those kinds of numbers, it's easy to see how the app would become an appealing communication medium.

I’ll admit that I’m a little unclear about why the verbiage surrounding the campaign directs it at men in particular. Presumably it has something to do with the assumption that men are more likely to engage in commercial sex than women, making the whole thing a sort of, “Are you unknowingly contributing to the problem?” message — but sex trafficking is an issue of which we should all be aware, no matter who we are or what country we’re in. According to the United Nations Office on Drugs and Crime’s 2012 Global Report on Trafficking in Persons, approximately 20.9 million people are the victims of forced labor globally, 58 percent of which are specifically victims of sexual exploitation. That’s over 10 million people. The good news is that anti-trafficking legislation is on the rise in countries all over the world — but there’s still more we could be doing to help. And by “we,” I mean all of us — not just men.

Even if the implications of the Eighty Twenty campaign’s mode of delivery might be a little confusing, though, the message is clear: Human trafficking in general and sex trafficking in particular are problems, and we have the power to stop them. Not sure where to start? In Ireland, head to Turn Off the Red Light; in the U.S., the Department of State has a list of ways you can help fight human trafficking. Now let’s get cracking.