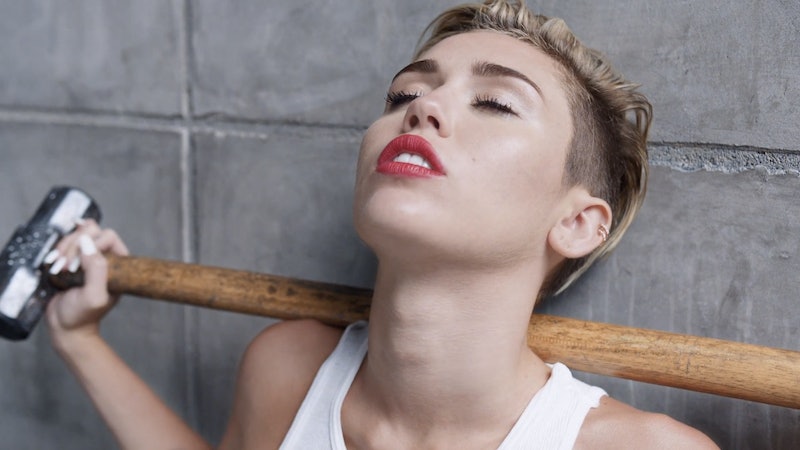 Quick, Internet! There's a new video with a naked young girl in it and we need to talk and judge the ever-loving shit out of it immediately. It's called "Wrecking Ball" and it's the latest creation from current media obsession du jour Miley Cyrus. It is, on the whole, as a video, a barrage of loaded bullshit. But — and stay with me here — I don't think that's necessarily a bad thing. It's just, well, it's a lot. So it's easy to see why the talk soup that is the Internet has a bevy of opinions on it.

If you haven't seen it yet, let me paint you a picture of what is, arguably, the stand-out visual vignette: Swinging above the wreckage of the walls previously around her, Miley is perched, writhing about nakedly on the wrecking ball that caused the concrete carnage below. Metaphors abound, y'all! And while the visuality of it all is far from subtle or nuanced, what's going on below the surface actually is. Welcome to Miley's introspective phase. Expect more wreckage to follow.

But is it art, you cry! Sure it is, because Miley — like it or not, folks! — is in an artistic industry, doing an artistic job. It's her job to make a product that is appealing. And guess what the number one rule is that creatively minded folks follow? Do what you know. Speak from your heart — it's what any and every good artist will tell you is the secret to creating good art, be it visual, written, musical, or otherwise. And it's no one's job to tell Miley what her art should or should not be. That is a process she has to go through in order to figure it out for herself.

Besides, look at this in context: Miley is clearly going through that very loaded self-discovery phase right before our eyes. But instead of it being via emotional outbursts (a là Britney Spears in 2007 — though we all know her breakdown was different in many ways from what Cyrus is dealing with), it's via artistic ones. The "look at me! look at me!" external validation is not to fluff up her confidence about who she is as a person. Instead, it represents her internal feelings about herself and the world around her, and she incorporates these feelings into what she creates. It's is certainly a healthy and normal way for any twentysomething to express themselves and discover their own belief system and individuality.

Miley is figuring out who she is as a musician/performer, and also who she is as a sexual being. Thus, not everything she produces is going to be perfect. Not everything is going to hit the nail on the head. Especially when you consider she's coming from the sexually repressed Mouse House, a place where all the performers are chastity-belted unicorns of positivity and joy, scrubbed clean of anything that could be even slightly misconstrued as impure.

But Miley has both feet planted firmly in the "sex" pot and the "artist" pot because those are two very large parts of who she is, and she wants to figure out how to balance the two while also figuring out what that means to her. Just look at this video! We get what Miley was going for — the idea of vulnerability is no more obvious with females than when we are naked — but the song clearly states that "I just wanted you to let me in / And instead of using force / I guess I should’ve let you in." In the video's visual instances, she's using that exact same force — pushing the audience to accept her as a sexual being — even if it's just via a visual display of vulnerability rather than an actual one.

So what does this prove? Cognitive dissonance is real, you guys! The two sides of herself she's providing are diametrically opposed: Miley's saying she's being vulnerable when it really just feels sort of cheap, because we, thanks to our own personal experiences, know that real vulnerability goes far beyond just taking your clothes off. But how can we expect Miley, who has been guarded from the real world, to know about the non-nude version of vulnerability? To say nothing of the fact that she's a woman, which means her body and sexuality is constantly being commodified and vilified, often in the same breath.

"But she's just being Miley!" you protest in the lyrical stylings of Cyrus' 2007 single "See You Again." And to that I say, yes, of course. But!

Do we even know what "she's just being Miley" means? Does *Miley* even know what that means? Probably not as much as she might think, but she's getting there, you guys. We're growing up in an age of delayed emotional puberty, a time when people only understand how they really feel after they shirk off whatever idea or pressure to conform they've boxed themselves into. Which, I would venture to guess is because we're growing up earlier in many ways while simultaneously living longer, meaning the time to think for oneself is no longer defined during high school or immediately after but rather post-college (or whenever the phase of "doing what's expected of you" ends for you).

I'm guessing for Miley that's happening right now, and since none of us live in glass houses, all we can say is good for her: This is the time when women start to figure shit out for themselves, coming face-to-face with who they are versus who they want to be versus what everyone else thinks they should be.

Which isn't to say that what Miley's going through to truly understand what "being Miley" is all about isn't wholly human and/or normal for someone her age: It's just that she expresses herself through her art, which just-so-happens to be made for mass consumption. And now this might be a stretch for me to say, but: I highly doubt many folks in the audience saw their personal growth and understanding of the world used to make a lot of people money and keep hundreds of people employed. [Insert "Under Pressure" musical cue here.]

So! Surprise should, really, be at a minimum here: You just have to let her work it out and either her talent (or sheer force of marketing will) will propel her towards the next stage of her life, or she'll fade into the background. Now all you have to do is decide to either pay attention or not.