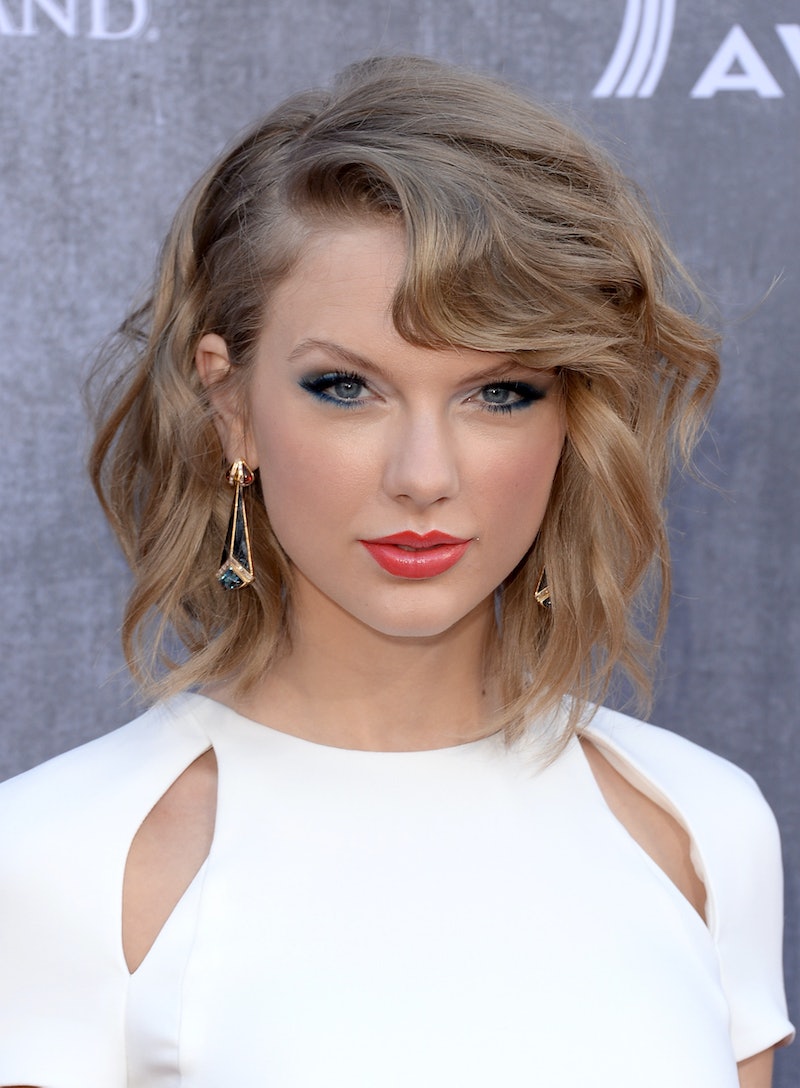 The period of time when it was cool to hate on Taylor Swift might actually be over, and it's a huge relief. Not only were the hoards of unenlightened and completely uncalled for commentary on her dating history exhausting (and usually inaccurate), but as a Swift mega fan, I was getting tired of getting caught in heated debates all over social media every time I jumped in to defend my homegirl. But now that the world's fallen in love with 1989 , that era seems to have come to an end, and it obviously gave Swift a lot of material to work with in writing her new album. Maybe that's why "Blank Space" is my favorite song on the record. You have to hand it to her: Nobody makes fun of Taylor Swift like Taylor Swift.

In the music video for "Blank Space," Swift takes her crazy ex-girlfriend reputation to the extreme. Shredding an old flame's clothes, destroying a portrait she painted of him, and even bashing in the headlights of his very expensive car — all things the media would have loved to frame Swift for doing one album ago. The video proves that, despite the criticism, Swift's kept her sense of humor. And this is hardly the first time Swift has mocked herself in response to that criticism.

Waaay back when Swift embarked on her first national headlining tour in support of her second album, "Fearless," in 2009, this gem of a video played on the big screens for all to see. "Crimes of Passion" is a mockumentary chronicling the lives of the subjects of Swift's songs — mostly talking about how she's ruined their reputations for life. Tim McGraw appears, and so does Love and Theft's Stephen Barker Liles, the guy her song "Hey Stephen" is about. Best of all? Swift ends the video taking notes during a date as she thinks of words that rhyme with her boyfriend's name. SEE? She made fun of herself long before anyone else did.

Swift has never been anything but forthcoming about her songwriting methods, and in the song she performed for her monologue when she hosted Saturday Night Live, she didn't mind going into detail. "I write songs about douchebags who cheat on me," she sang. "I like writing their names into songs so they're ashamed to go in public." No secrets here.

"We Are Never Ever Getting Back Together"

At a time when it seemed like the entire world wanted to peg Swift as a vengeful breakup song writer, she gave them exactly what they were looking for. Do you need some ice for that burn?

This is one of my favorite videos of all time, mostly because Swift makes her life look a lot like mine — even when she's mocking the idea that she's bad at relationships. "That's a little fast, and I'm saying that," Swift says as she doles out dating advice to a friend. Oh, wanna call her a cat lady? There's a response for that in there, too.

Her promo for The Voice

In a very subtle moment when Blake Shelton says, "How come when you refer to crazy girls, you never throw yourself in that category?" Swift responds, "I just feel like it's assumed and understood." Boom.