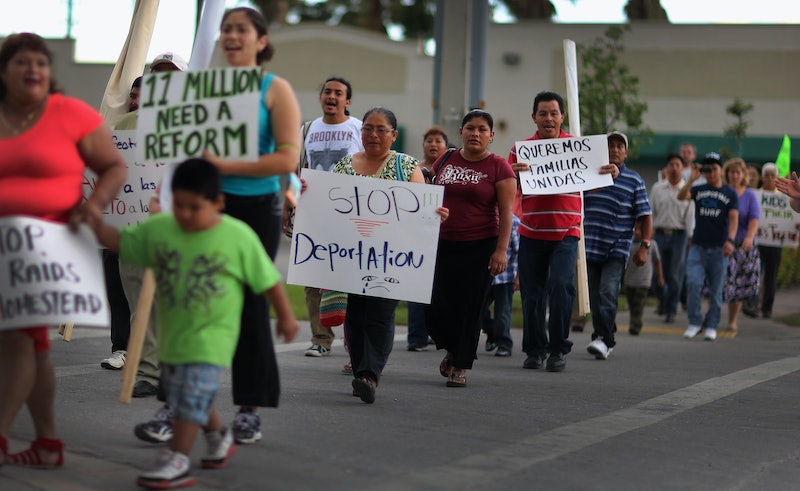 The debate over whether or not to take military action in Syria that has recently gripped the White House and Congress has caused one hot button domestic issue to fall by the wayside: immigration.

Immigration overhaul has been at the center of President Obama's domestic agenda, with the president arguing there is no reason why the bipartisan "Gang of Eight" immigration bill shouldn't pass by this summer's end. However, summer recess is over, and Congress is likely to delay considering the issue until the end of the year, if not longer.

The potential postponement understandably has overhaul advocates upset, especially after a summer that seemed a likely turning point for the initiative, given that conservative opposition was easing. Forward momentum also came from the White House, with Obama integrating rhetoric advocating bipartisan immigration overhaul into speeches as seemingly unrelated as his remarks on housing reform. With the debate over intervention in Syria this last month, that agenda has largely been put on the back-burner.

If immigration reform gets pushed back, "we will see an ongoing tearing apart of families due to the massive detention and deportation system that is already in place, a continuation of marginalization of people without documents, and a lot of anger overall," Amy Gottlieb, Program Director at American Friends Service Committee Immigrant Rights Program, told Bustle.

Michelle Gonzalez, a 2013 Fellow at Immigration Equality, weighed in another crucial issue that will suffer if immigration overhaul gets delayed: detention reform.

"A lot of [these reforms] are life and death, no exaggeration," Gonzalez told Bustle, "especially for our clients, like LGBT people, and especially transgender people. It’s a really terrible place to be in. [Detained transgender individuals] are often denied the hormones that they need. This may lead to severe depression, suicidal thoughts."

"Detention reform would really be helpful not just for LGBT people, but for all people who are subject to detention," Gonzalez added. "That’s not something you want to put on the back-burner."

The gap between the expectations of reform proponents and the reality they face in Washington widens more each day. Simultaneously, the window of time Congress has to take action shrinks — if the House does not take up the immigration bill the Senate passed in June by the end of this year, members will have to decide whether to vote on the highly controversial issue in the middle of a Congressional election year. Congress only has nine working days in September, 14 in October, and eight each in November and December.

The delay on voting on the bill could likely extend until after the November elections, in large part because Republican primaries start in the spring, and many Congresspeople may be unwilling to touch the immigration issue right before facing their conservative constituents.

But advocates of immigration overhaul do not intend to let up. Focus is being directed to October, when rallies in at least 40 cities will take place on the fifth of the month, followed by a march and rally in Washington on October 8. Leaders say the issue of Syria, as well as the debt ceiling debate, should not become "excuses" to ignore immigration.

“We’re gearing up for late October — we’re going to push really hard for votes this fall and negotiations with the Senate,” Frank Sharry, the executive director of advocacy group America's Voice, to the New York Times. “We never figured we’d have an opportunity in September because of the budget stuff and with the debt ceiling."

In an exclusive interview with Telemundo’s Enfoque anchor José Diaz-Balart, Senator John McCain (R-AZ), one of the "Gang of Eight" authors, echoed the sentiments of overhaul advocates.

“I’m very concerned about that — because this issue must be addressed,” McCain said, referring to the possibility of other issues overshadowing immigration reform.

Rep. Mario Diaz-Balart (R-FL), who is working on his own bipartisan immigration bill in the House, agreed.

“Time is our enemy,” he told NBC Latino. “If we don’t get it done this year, it gets more difficult.”