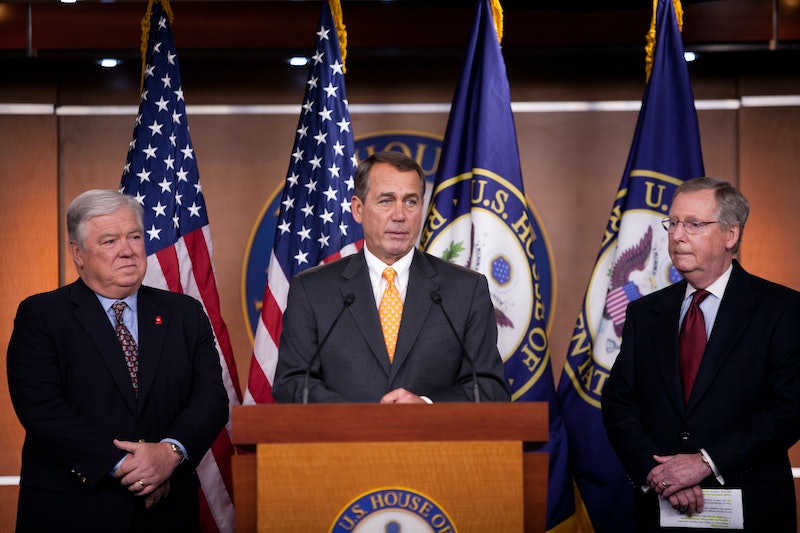 That 2014 midterm election day was a real doozy. And with the dust cleared, both houses of the U.S. Congress will be under the control of the same political party for the first time in three years. Except this time, it's the Republican Party that's in charge, an occasion which is sure to cause some teeth-gnashing by Democrats and liberals everywhere. So, with a full two years (at least) of GOP rule over the Senate and House alike, here's a relevant question: what will Republicans actually do with their congressional majority, and how is it likely to affect everyday American life?

Unfortunately, Monday brought a not-too-encouraging indication of what may be coming — soon-to-be Senate Majority Leader Mitch McConnell announced that Senate Republicans intend to strip new regulations implemented by the Environmental Protection Agency (EPA) earlier this year, designed to reduce greenhouse gas emissions from American power plants. Greenhouse gases are, as found by a broad and well-scrutinized scientific consensus, a pivotal contributor to the worsening state of climate change on Earth, a slow-motion global crisis which humans have little time left to mitigate (scientists believe it's already too late to halt outright). Unfortunately, as Republican politicians enjoy reminding us, they're not scientists — and not being a scientist apparently means you can't understand scientists, either.

So, just what areas can we expect to encounter some worrisome GOP proposals in? They're sure to want to force President Obama into some high-profile vetoes, so here are some examples of items likely on their agenda, in 2015 and beyond.

If one thing's been pretty clear over the last several years, it's that the legal, legislative and regulatory battle over women's reproductive rights has hit something of a fever pitch in the United States. For evidence, you need look no further than the targeted regulation of abortion provider (TRAP) bills promoted and passed in a number of GOP-led state legislatures around the country — Texas, for example, is down to just 16 abortion providers thanks to their TRAP laws. In Ohio, Cincinnati's last remaining clinic is facing closure.

While the Senate was still under Democratic control during Obama's first six years, the Republicans obsessively churning out anti=abortion legislation in the House, though to little avail — nothing becomes law without the signature of one Barack Obama, after all, and the Senate minority makes matters even tougher. But with a majority, the Republicans can now take this ideological keystone national, forcing Obama to veto bill after bill of abortion-restricting legislation, while they gain plaudits from their anti-choice base.

What form might this push take? Over at RH Reality Check, Emily Crockett argues that a federal 20-week abortion ban may be in the cards — Republicans have passed similar state-level bans already, and McConnell has identified the issue as a priority.

Expect to see the Keystone XL oil pipeline back in the news now that the GOP rules the Congress. Republicans have already been verbally skewering the Obama administration for stalling approval of the controversial oil pipeline, which would run from Canada down through the Dakotas, Nebraska, Kansas, Missouri, Illinois, Oklahoma and Texas. Oil pipelines post considerable risk to the environment by way or ruptures, leaks and spills — there have been dozens of pipeline-related incidents over the last few years.

And that's setting aside the reality that we need to be expending less dirty fuels, not more. As The Atlantic's Noah Gordon observes, Keystone XL is enough of a GOP hobby horse that it's possible Obama could swap approval for the project in exchange for a promise from Congress to keep its hands off those aforementioned EPA regulations. But obviously, any deal with Congress is a deal with Mitch McConnell, a ripe opportunity for a backstabbing.

3. Attacking Obamacare By Any Means Necessary

This one probably goes without saying — from the very moment the Affordable Care Act was signed into law, the Republican Party has done everything it can to stall, stymie and damage it, both strenuously insisting it's a blight on American life that should be repealed, and mounting various legal challenges to it in courts throughout the United States.

It's no secret that the GOP loves to vote against the law, even when only in a symbolic way — Obama isn't going to sign a repeal of his signature achievement — but now with the power of both houses of Congress, you should expect to see bills altering, repealing or stripping elements of Obamacare making it to his desk with increasing frequency. After all, the House of Representatives under Speaker John Boehner has already held a whopping 50+ votes on the law.

4. Immigration, One Way or Another

Just what will a Republican-controlled Congress do on immigration? It's hard exactly to say, save the safe assumption that it'll be less favorable to undocumented immigrants living and working in America than a liberal solution would've been. Indeed, the anti-immigration rhetoric runs deep in much of the congressional GOP, with some particularly zany and offensive takes originating from the House — remember Rep. Peter King's fears of marijuana-carting "calves the size of cantaloupes?"

Basically, if Obama goes through with his planned executive order on immigration — and at this point, he's going to have a major revolt on his hands if he doesn't — the GOP may be forced to tackle the issue, if only to pass some form of bill to back the President into a corner. Obama has said that an immigration reform bill would supersede his order, though obviously it's well within the Congress' ability to pass such a bill that Obama wouldn't like to sign. For purely political purposes, getting a bill labeled "immigration" passed that Obama would have to veto would be a big boon for the Republicans.

Of course, there's no telling just yet how the internal party politics will play out on this one — as Vox's Dara Lind details, the Senate GOP is at a pivotal crossroads, with McConnell and Texas Senator Ted Cruz at loggerheads over immigration reform and government funding.