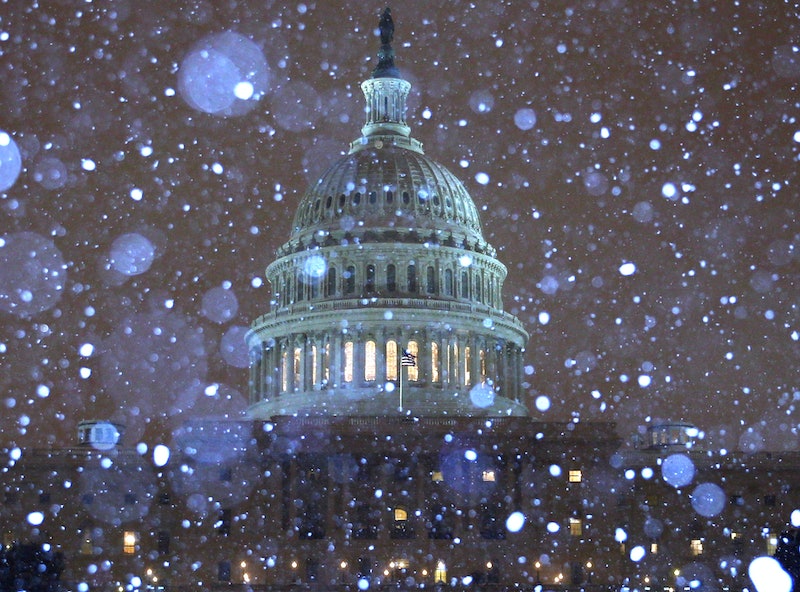 As winter looms over us all like a hulking, shivering menace, news outlets are replete with cautionary specials on what's known as the Polar Vortex. The term — which became something of a media sensation last year — refers to a downswing of arctic winds into the U.S., bringing scary-cold temperatures and wind chill factors along with it. Reporting on this is is all fine and good (especially when you use Frozen gifs), but the stories being released in anticipation of what this winter may have in store are getting a little ridiculous. Between using dramatic terms like "bomb cyclone," to straight up ignoring scientific facts, polar vortex overreactions are appearing en masse.

I'll be the first to say that polar vortex paranoia is pretty funny, but one of the worst things about these overreactions is that they very generously blur actual scientific fact. For example, did you know the polar vortex has always existed? It's actually not a weird freak accident caused by global warming, like some weather channels would have you believe.

The polar vortex is a cyclone that hangs out over the Arctic, keeping cold weather up there for all the cold-loving animals like polar bears and what not. Sometimes, the polar vortex parties a little too hard, and chunks of it will creep into Canada and the U.S. This has always happened and is no way new or special — we've just started talking about it more.

As for the cyclone bomb, Dennis Mersereau at Gawker's The Vane helpfully explains it for those of us who can barely read a thermometer:

The western Pacific saw a pretty strong typhoon earlier this week, named Super Typhoon Nuri. The storm reached the equivalent of category five status as it stayed east of land; the fact that it didn't make landfall anywhere is why you didn't hear about it unless you're a hardcore weather geek. (...) Nuri is experiencing its extratropical transition as it approaches a very strong streak within the jet stream, allowing the storm to further intensify into a monster. (...) This storm will set off a chain reaction in the jet stream, as the Capital Weather Gang characterizes it, that allows a deep trough to dig through the United States. When the jet stream dips south during the cold months, it can allow cold Arctic air to spill south into Canada and the United States.

So no, you're not going to freeze à la Anna in Frozen. You're not going to need to enlist a team of sled dogs to get to work. It's just gonna be a little chilly and unpleasant because typhoons suck or whatever. Outside of brief periods where the polar vortex experiences instability and dips into the U.S. for a bit, this winter should be pretty normal.