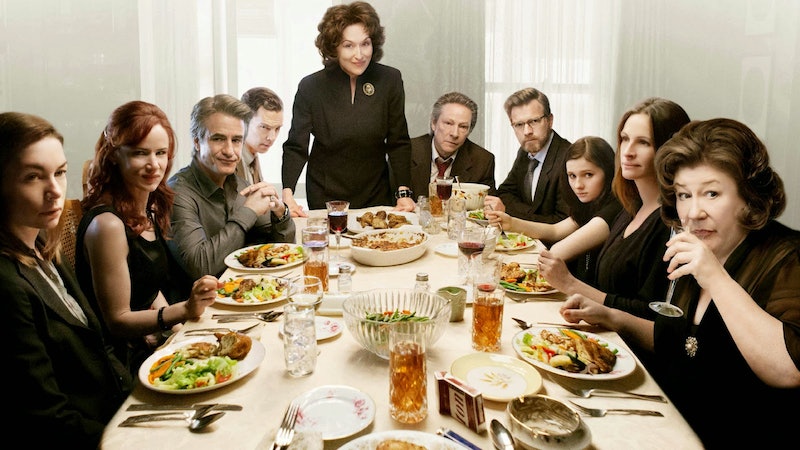 Either the ABC Family Channel has been lying to me all of these years, or Thanksgiving is a time for family and togetherness, even if your family sometimes doesn't get along. But what about the times when your family's togetherness feels less like a warm embrace, and more like the scene where they almost get crushed by the trash compactor in Star Wars? What if, for you, Thanksgiving doesn't just mean "time to break out the elastic waist pants" but also, "time to break out your inner reserves of steely emotional resolve" — because Thanksgiving signals the beginning of your family's annual inquiry into What Exactly Is Wrong With You?

I'm sure you love your family; but you can love them and still admit that every holiday season, they transform from the lovable human beings who taught you how to ride a bike into the grand inquisitors of adulthood, demanding answers about why you're still wearing crop tops and doing internships. And the worst part is, these questions come from a good place: your family loves you, they want you to be happy, and when your life doesn't look like their life or the lives of any of the people they know, they worry that you're actually not happy and that you need their guidance. That doesn't excuse their behavior, but hopefully, it at least places it in context.

But how much comfort will context give you when you're under the gun and explaining to your dad how "blogging" is actually a real career? (who's projecting here? Not me!). Comfort isn't enough — you need a strategy. A strategy besides pretending to go to the bathroom, then running to the kitchen to guzzle Franzia until you no longer feel any pain . And going off on your family won't fix things — it may let out some frustrations in the moment, sure, but in the end, it will just ensure that you're in for one uncomfortable extended holiday season.

So instead of freaking out when your family asks you the same old tired, invasive questions this Thanksgiving, take the high road with the answers below, which will make you seem like the relaxed, confident, mature one in your family.

Then, when everyone's gone to bed, you can finally chug the Franzia. Adulthood!

WHY ARE YOU STILL SINGLE?

What You Would Like to Say: "It's definitely not because I have been busy with work/school lately, or because I'm not ready to settle down, or because I haven't found the right person yet. I have remained single all these years simply to spite you, Mom and Dad. The pain you feel from not seeing my coupled off is the greatest thrill that I could imagine. Also, I am a witch who lures children to my gingerbread house."

What You Should Actually Say: "I've been meeting some new people lately, and I will let you know if anything pans out. But I've been focusing more on school/work lately. Which reminds me — did I tell you about my [Recent Awesome Work/School Triumph]?"

YOU KNOW, YOU'RE NEVER GOING TO GET A JOB WITH AN ENGLISH DEGREE.

What You Would Like to Say: "English is a real major, and the unemployment rates of English majors are actually slightly lower that people who majored in seemingly more practical areas of study, like education, pre-law, or accounting. Plus, my English degree has allowed me to discover 37 synonyms for 'shut your pie hole,' all of which I would like to use right now."

What You Should Actually Say: "English is a real major, and English majors are actually highly employable. If you really want to discuss it, I can show you some stats later, but I'm sure everyone else here would rather discuss something else. Like, say, who's seen that movie Interstellar?"

SO, HAVE YOU GOTTEN OUT OF CREDIT CARD DEBT YET?

What You Would Like to Say: [Wordlessly lie face down on the carpet, wait for the end of the holiday weekend/the cold embrace of death.]

What You Should Actually Say: "I'm making good progress on it, but it's not too interesting. I heard that you just got a promotion though, right? Tell me about that!"

WHEN ARE YOU GOING TO GET A REAL JOB?

What You Would Like to Say: "When a single human beings decides that I am actually worthy of being allowed to interview for a job. But until that magical day, I'll keep sending out my resume, and those HR staffers will keep throwing them into a paper shredder while laughing maniacally."

What You Should Actually Say: "I'm looking, but in the meantime, I've been getting involved in some great volunteer programs. And you know, I heard that volunteering is a great way to land a job, actually."

WHEN ARE YOU GETTING MARRIED?

What You Would Like to Say: "Oh, damn it, I knew there was something I forgot to do at the airport yesterday!"

What You Should Actually Say: "I'm glad that you want to see me happy, but no one — including you, me, and my theoretical spouse — would benefit from me rushing into such a serious commitment. So, anyway, who wants to come with me to see Interstellar tomorrow night?"

YOUR old FRIEND SARA JUST HAD HER SECOND BABY, WHEN ARE YOU GOING TO HAVe SOME?

What You Would Like to Say: "Whenever Sara stops posting pictures of her kids on Instagram with tags like #angel #blessing #blessed #lifepurpose #mylifewaspointlessbeforeIhadkids, so I guess ... never!"

What You Should Actually Say: "I'm very happy for Sara, but now's not the time for me to do that. Don't worry about me, I am not missing out on the things I need to be happy."

WHEN WAS THE LAST TIME YOU attended religious services?

What You Would Like to Say: "Well, if they had them any time besides the times of day when I'm most likely to be hungover, I'd maybe think about it."

What You Should Actually Say: "I was there during [Last Major Religious Holiday That You Celebrate]

(note: this isn't technically a lie if you've gone in the past — hey, you said "I went on Yom Kippur," you didn't say "I went this year on Yom Kippur.")

What do you think of that liberal tyrant, obama?

What You Would Like to Say: "No! NO! You are not making this into another Christmas Dinner '08, okay? I am still talking about that one in therapy!"

What You Should Actually Say: "Has anyone seen any good movies lately? I hear that Interstellar is a lock for some Academy Award nominations this year."

What You Would Like to Say: "Oh God, can't we discuss this later? And what is that, your twelfth glass of Franzia? Damn this boxed wine, it is like a pox upon our house!"

What You Should Actually Say: "We can discuss it later, but you're my sister/brother, and I love you, and while I want you to feel heard, I also really feel like the past is the past. Could you pass me the boxed wine?"

What You Should Actually Say: "It's the stuff you use to start a fire, Mom."

IS THAT A TATTOO?

What You Want to Say: "Nope! Think you're just hallucinating from all the stress of being a really great mom/dad!"

What You Should Actually Say: (Just make sure that no one can see your tattoo. Grandma wouldn't appreciate the intricate scrollwork design, anyway— her taste in fonts is so pedestrian.)

HOW DO YOU LIKE THE FOOD? YOU'VE BARELY TOUCHED IT!

What You Would Like to Say: "Gonna get in my car after you've all gone to sleep and cruise around until I find an open Taco Bell."

What You Should Actually Say: "Oh, it's great! I just filled up on stuffing while we were cooking."

YOU'RE STILL NOT EATING MEAT? WHEN ARE YOU GONNA SNAP OUT OF THIS PHASE?

What You Should Actually Say: "I actually don't think anyone here's too interested in that answer, because it's not all that interesting. Say, have any of you seen Interstellar? I heard it was pretty overrated."

ARE YOU ON FACEBOOK? I JUST GOT ON THERE, CAN I FRIEND YOU?

What You Would Like to Say: "I can barely cope with talking to you one damned day a year."

What You Should Actually Say: "No. No, I am actually not on Facebook. Sorry."

I THINK YOU'RE living an immoral lifestyle

What You Would Like to Say: "Grandpa, you're cut off from the boxed wine for the rest of the afternoon. Go lie down."

What You Should Actually Say: "Grandpa, you're cut off from the boxed wine for the rest of the afternoon. Go lie down."

More like this
21 Galentine’s Day Memes To Celebrate Your Best Friends
By Meghan Bassett and Mia Mercado
23 Super Sweet Things To Write In A Valentine's Day Card
By Karen Belz and Lexi Inks
5 Signs You Have A Toxic Relationship With Yourself
By Lexi Inks
50 Valentine’s Day Instagram Captions To Post If You’re Single
By Jessica Booth, Lexi Inks and Carolyn Steber
Get Even More From Bustle — Sign Up For The Newsletter
From hair trends to relationship advice, our daily newsletter has everything you need to sound like a person who’s on TikTok, even if you aren’t.