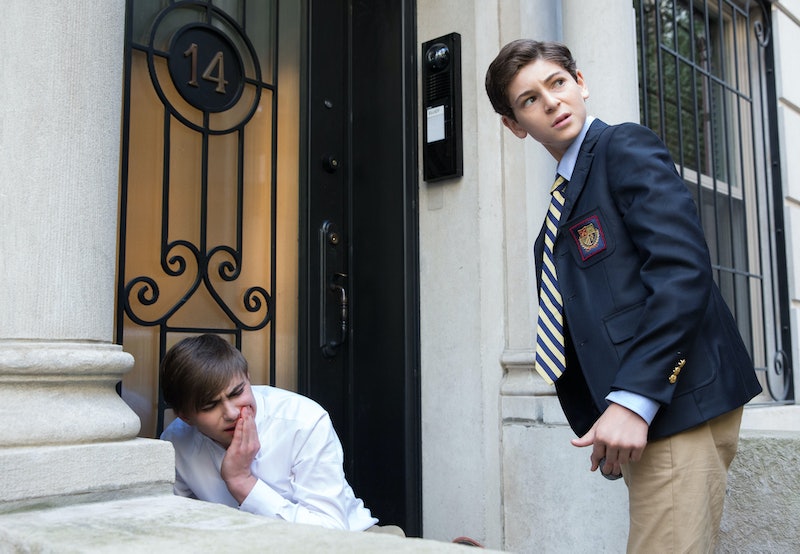 Guys, what if we've been looking at this Joker thing all wrong? The biggest question on Gotham for me, besides who killed Thomas and Martha Wayne, has been the question of who is going to become the Joker. On Monday's episode of Gotham, we got a possible answer in the form of a boy named Tommy Elliot. Bruce Wayne, AKA the future Batman, went back to school and almost immediately ran into his first bully. Tommy's invasive questions about the night of the Wayne murder, and the almost sociopathic way he didn't seem to see anything wrong with this line of questioning, almost immediately made him seem unhinged — and we all know who the most unhinged person in Gotham is. What if the Joker isn't all grown up like Penguin or The Riddler? What if he and Bruce are the same age and go waaaaay back? What if Tommy Elliot is the Joker?

Sadly, he's not. Even though Bruce bested him by the end of the episode, using advice from Alfred to ambush Tommy on his front doorstep and punch his face in, if Tommy returns as a villain then it won't be as the Joker. It turns out that Tommy Elliot is the name of another DC supervillain — Hush. In the comics, Tommy and Bruce were childhood friends, but Tommy was just a wee bit unbalanced. And by a wee bit unbalanced, I mean he kills both of his parents. Sure, his father was abusive and his mother was complacent, but causing a murder before you're even out of your teens is serious red flag behavior.

Of course, the relationship between Bruce and Tommy went south after Bruce's parents' were murdered in the comics. Tommy resented Bruce for the money he inherited from his parents when they were killed, mainly because Tommy himself would trade his parents' lives in for their wealth in a heartbeat. It appears that Gotham is sticking with that same storyline, because Tommy and Bruce certainly didn't seem like old friends in Monday's episode. And they certainly aren't going to become friends after Bruce left him a bleeding mess on the ground in front of his house.

Just like Bruce has got a long way to go before he becomes Batman, Tommy has got a long way to go before he comes Hush. In fact, it's unlikely that we'll see him again immediately. He was just a catalyst for Bruce to ask Alfred to teach him how to fight, so he can continue on the path that will one day lead him to dressing up like a man in a bat suit to fight crime. However, Hush and the Joker do cross paths several times in the comic book mythos and it will be interesting to see if Gotham will do a nod to that by having their paths cross on the show, before they become Batman's greatest foes. Then again, for that to happen, Gotham would have to finally reveal the identity of the Joker and they don't seem to be eager to solve that mystery for us just yet.