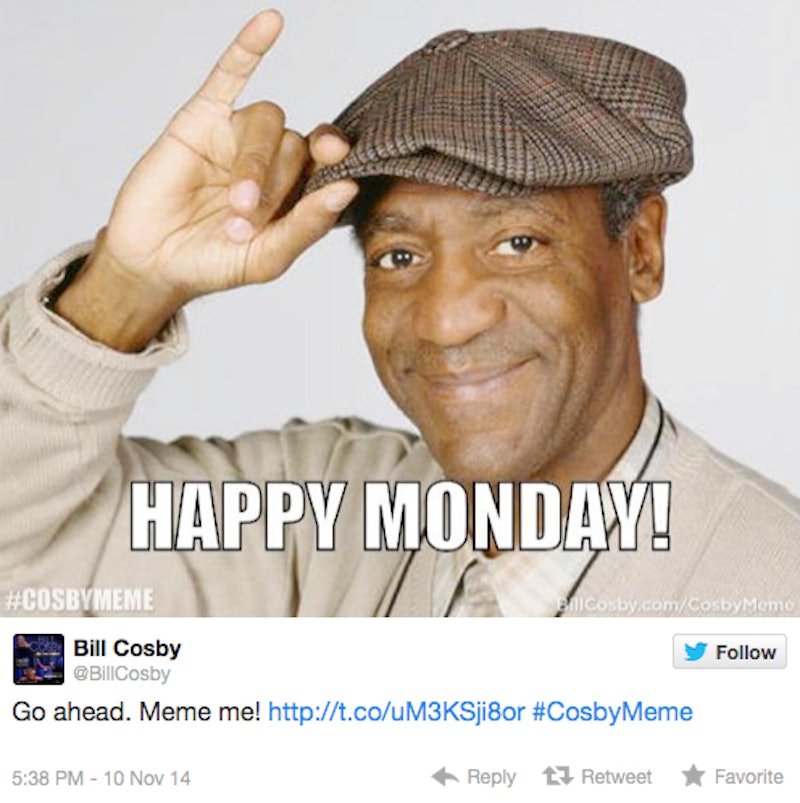 I learned something very important from the pilot episode of Pokémon back in the days of my youth: you don't choose the Pokémon, the Pokémon chooses you. This was a valuable life lesson, because it also prepared me for the creation of memes. You don't ask to become a meme; you have the responsibility of being a meme thrust upon you. This is something that somebody should have mentioned before Bill Cosby hit Twitter asking people to "meme" him. I'm assuming that whoever runs his social media accounts has been living under a rock, considering the way inviting people to use hashtags in the past has backfired among celebrities of ill repute (#AskThicke lately, anyone?), and the internet did not disappoint.

The shenanigans began with a simple tweet from Bill Cosby's account with a cheerful picture of him that says, "Go ahead. Meme Me!" with the hashtag #CosbyMeme on Monday night. As we all understand, this is the internet equivalent of ripping a hole to hell in the earth with your bare hands – even the world's most innocent person's reputation could be torn apart, and Cosby's past is not at all squeaky clean. It is well-known that Cosby was accused of sexual assaults and even cases of rape in the early 2000s, with some instances dating as early as the 1970s. Despite heavy coverage and the testaments of several victims coming forward, all of these instances seem to have been swept under the rug, and even forgotten entirely. At least until now, when Twitter users took the opportunity to use the hashtag to create dozens of brutal memes about the allegations that have started circulating in the few hours since that initial tweet.

Here is the first tweet that Cosby sent out (which has since been deleted), and a few of the #CosbyMemes that have hit Twitter since: