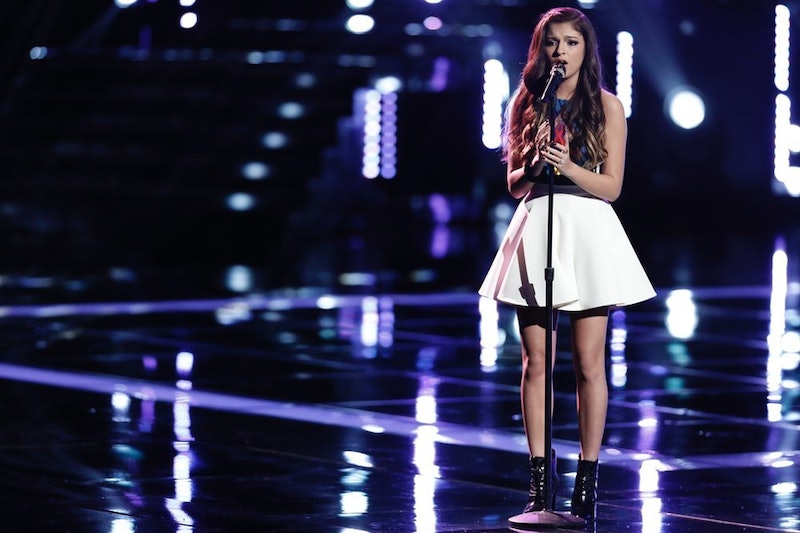 As if we weren't all already thinking this about this The Voice powerhouse. On Tuesday night's live playoff's, Team Gwen contestant, Bryana Salaz performed "Amnesia" by 5 Seconds of Summer and she KILLED it. Following Gwen's guidance, Salaz toned down her ad-libbing during the song and, instead, delivered one of the most powerful performances this season of The Voice has seen thus far. And it was only made sweeter and more genuine by the fact that Salaz dedicated the song to her father, who serves in the Army on Veteran's Day. It was sweet, it was powerful, and it was exactly what all of the judges were trying to get the contestants to show over the past few weeks — their souls.

Salaz's performance was so perfect and so raw that her coach, Gwen, actually said "I love you" when you couldn't think of any better way to praise the singer. Seriously, Gwen Stefani told Salaz that she loved her. I'm not sure if there's higher praise than that in the universe. Bryana Salaz is, without a doubt, the strongest member of Team Gwen and, possibly, the only star with enough power and control of her talent to go head-to-head against Team Blake's powerhouse Reagan James.

I've been a Bryana Salaz supporter for awhile because I absolutely believe that she can win this thing. She knows she's talented, but she hasn't let it cloud her judgment when it comes to taking Gwen's advice seriously (a problem I've noticed with some other contestants this season). And that's going to take her as far as she can possibly go on this season of The Voice. Salaz is clearly what some would call a total package on The Voice — she's talented, she's eager to learn, and she delivers every single time she gets on stage. If Gwen asks her for emotion and to bare her soul, she has you crying by the end of her performance right alongside her. If Gwen asks her to pump up the attitude and "bring it," Salaz can do that too. And, while she's a huge fan of the wild embellishments, Salaz is equally great when she strips her vocals down to their bare bones.

She's an incredible performer and I feel confident saying that she's a frontrunner on Team Gwen to win The Voice. If you don't believe me, watch Salaz's live playoff performance here and try not to cry: