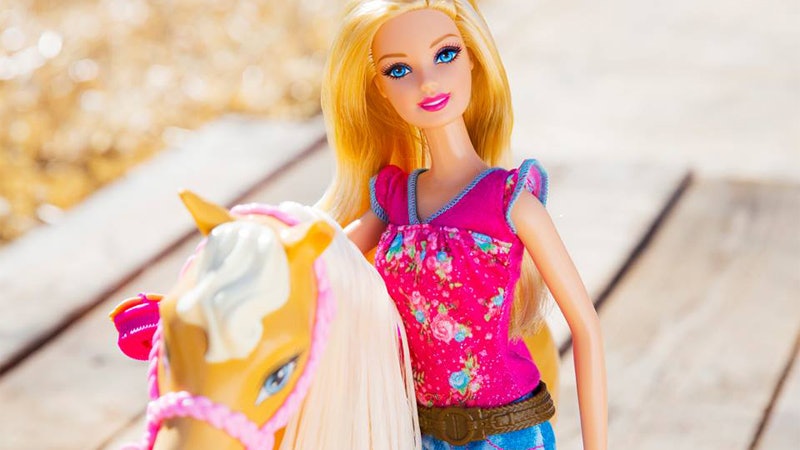 What I am about to say is likely to be derided as unpopular, out of touch, and even antifeminist: I like Barbie and I have ever since I was a little girl. When I found the recent Goldie Blox advertisement, where scores of young girls were "brainwashed" into picking up pink, Barbie-like dolls in pretty fluffy skirts and high heels before the new engineering doll broke the mold, I couldn't help feeling insulted. Yes, I am a feminist Ph.D. who doesn't bother shaving her legs — and I think the rash of recent Barbie-hating has frankly gone too far.

I have a deep love of dolls in general. I collected hundreds when I was a little girl, big porcelain ones with heavy heads and open-shut eyes, tiny wooden ones, celluloid vintage ones from the '50s. I grew up in Sydney, Australia, where the Doll Hospital has just celebrated its 100th anniversary mending beloved, bashed-to-pieces, scalped, limbless dolls for their distraught young owners. I own my mother's dolls (a bald plastic baby named Betty and a blonde-ringletted, jointed girl called, inexplicably, Johnny) and my grandmother's dolls (one peaches-and-cream model is an amazingly lifelike four feet high). Friends would refuse to sleep in my room during sleepovers because of the rows and rows of sweet girlish eyes staring down at them.

For some primal reason, we humans love small models of ourselves. But until Barbie, girls were not given images of women: they were given babies, infants, companions in their childhood or tools to teach them their nurturing place at home. There were no dolls that encouraged them to imagine themselves as adults until Barbie arrived.

And in that collection were Barbies. I owned perhaps 50, from run-of-the-mill blonde Californian models to the "collector's editions," dressed as movie characters, designer dreams, and even strange interpretations of famous artwork (I had Van Gogh's Sunflower Barbie and was too scared to play with it for fear of ruining her). There were two or three Kens, but it was the women who fascinated me. They seemed to embody endless adult possibility: This was the late '80s, when Barbie had truly entered her empowering "be anything" stage, and I had a whole storage box of different career outfits to prove it. My future, and hers, seemed limitless (though "Writer Barbie" still doesn't exist, alas).

This love is now deeply unfashionable, and has been since the riot grrrls and grunge fashions of the '90s really started tearing up Barbie's pink image. Her exaggerated body proportions, with her nine-foot legs and her reticulated heels, have been castigated as a terrible influence. Sport Illustrated's Barbie cover in 2013 drew howls of protest; the toy company Lammily has come up with "Average Barbie" to counteract the doll's unrealistic shape. A much-touted (and, I might add, very small) Oregon State study reported that playing with Barbies stunted young girls' career ambition. But Barbie's revolutionary aspect, that she allowed us to look at our futures as glamorous adults rather than as baby-carers or little girls, is still important.

I'll admit it: There are, and always have been, some very deep problems with Barbie. She's unrealistic, unfeasibly pretty, and Mattel took an alarmingly long time to start producing her in non-Caucasian skin colors — Black Barbie didn't arrive until 1980. She can't bend her legs, and she never suffers bad hair days, bad boyfriends, or failure. She teeters vulnerably in high heels (though, fairly early on, Mattel began making flat shoes for her), and her breasts are ridiculous. I completely acknowledge these issues.

However, we forget, now, that Barbie was completely revolutionary for her time — because she was the only adult doll on the market. She was actually "adult" in origin: She was based on the sultry German cartoon character Lilli, whose innuendo-ridden cartoons ran in the newspaper Bild. The newspaper produced a doll which was sold to men as a promotional item, and Barbie's creator nabbed the idea in 1959. Even for a serious collector — which, even at a young age, I was — she was, and is, the only easily available grown-up doll around. Unless you count the small mother/wife dolls for your dollhouse family, dolls were (and are still) largely babies or young girls. The introduction of the Bratz and American Girls to the market has only recently expanded to include young teens.

Dolls existed in many ancient societies; there are models from the Maya, from the Egyptians, from the Romans, in bone and jade and wood and ceramic, all clearly loved and dandled. For some primal reason, we humans love small models of ourselves. But until Barbie, girls were not given images of women: They were given babies, infants, companions in their childhood or tools to teach them their nurturing place at home. There were no dolls that encouraged them to imagine themselves as adults until Barbie arrived.

It was an intensely powerful moment. Barbie allowed young girls to envisage adult relationships, jobs, developed personalities, even fantasies; the Barbie catalogs of the '50s and '60s contained dress-up characters for masquerade balls and plays. She came with an optional boyfriend accessory whose ensembles matched hers, not the other way around: Boys were definitely not the main point of her life. Barbie's purpose was the best kind of elusive; her diverse wardrobe slipping from luncheon dates to gala gowns to wedding dresses without one look ever being definitive. She could, truly, be anything.

Barbie has also, exceptionally, never been marketed with children of her own: All the younger children in the Barbie line are her siblings. (Midge, Barbie's friend, was sold with a removable baby in a womb in 2003, but it was discontinued for being creepy.) Considering that Barbie was originally marketed as a teenager, that's appropriate, but it's also a pretty radical shift from the previous purpose behind dolls for girls. Barbie wasn't teaching them to be mothers or good housewives.

The success of the doll was immediate, and it contributed to her ultimately divisive reputation. So complete was Barbie's domination of the adult-doll portion of the market that no other model has ever really existed; she was the only toy image of grown-up life that young girls had. Mattel has diversified her face, her jobs, and her possessions — even her waistline, which was widened in 1997 — but she has had to be everything to everyone. Which means that when there were mistakes (many, in fact), people were both very invested and very upset.

As for the Oregon State study in early 2014 which posited that girls who played with Barbie had lesser career ambitions: In the study, the girls were allowed two Barbies — one a fashion model and the other a doctor doll — and one Mrs. Potato Head. The girls with the Barbies reported that they thought that girls could do fewer jobs than boys, while the girls with Mrs. Potato Head saw no such restrictions. That, for me, isn't a Barbie problem: It points to the girls' belief that career women can only be taken seriously if they endeavor to look less glamazon, more Mrs. Potato Head.

I completely agree with the Goldie Blox manifesto of more movable, capable dolls: My favorite of my Barbies was "Becky," the first wheelchair-bound Barbie, because she had actual joints, so she could climb things (after a remarkable recovery, of course). I also won't deny that Barbie's body is out of reach to everybody except those willing to undergo extensive plastic surgery, and that the existence of diversity is crucial for kids' understanding of bodies and their possibilities. Other body types on Barbies would be welcome, if a problem for the brand's iconography.

However, Barbie has hardly been a slouch on the inspirational careers front: she's been a dot-com entrepreneur, a programmer, the president, a doctor, and even a paleontologist. She's helped show young girls everywhere that one day, they, too, could grow up and have an exciting career — and that having a baby doesn't have to be part of that equation. She's come a long way since 1959, and I feel like a little more respect is in order for the very first grown-up doll of them all.

After all, she did help so many of us grow up.