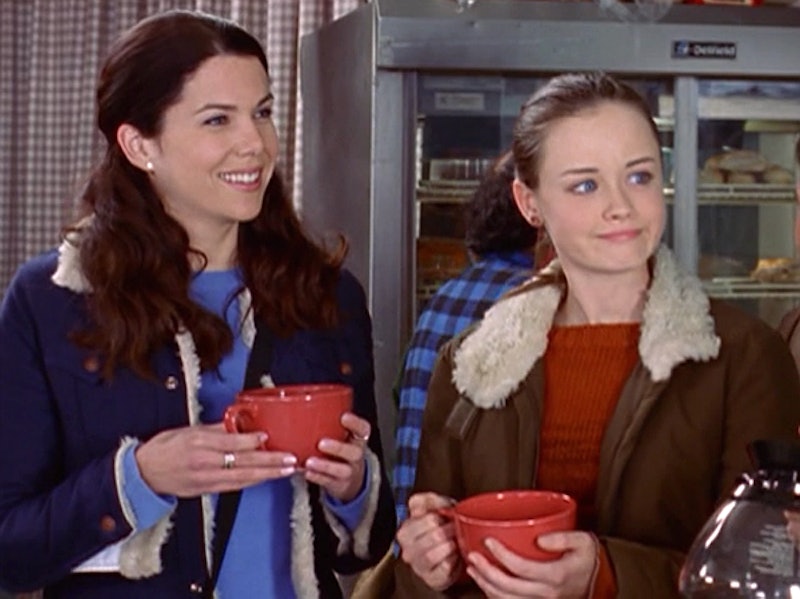 Today a brand new addition to the Starbucks Holiday family, the chestnut praline latte, made its grand debut, and if you're anything like me you're just waiting until you can get off work to utilize their BOGO deal. Also if you're anything like me, you're blessed with no less than three Starbucks in your immediate area. It feels like no place is safe from the green and glorious grip of Starbucks, save for the small towns that reside happily on our TV screen and Netflix account. But how long is it before that changes?

No matter how much Starbucks weaves itself into our college campuses, A&P's and friendly neighborhood bookstores, television remains usually untouched by the brand. Is that perhaps an issue of copyright? The "Coffee Bucks" seen in Scrubs and Cougar Town would imply that. But if you dig deeper, there's still "one-Starbucks towns" like Buffy the Vampire Slayer's Sunnydale. Could we blame the cafe for the town's ultimate descent into the Hellmouth? Probably not. But one thing's for certain: once Starbucks arrives, nothing will ever be the same.

For better or for worse, here's how six fictional towns would be affected by the arrival of a Starbucks.

Pawnee from Parks and Recreation

If the Pawnee-Eagleton merge is any indication, Pawnee does not do well with change. So I can imagine there'd be utter chaos if Leslie found out one day that JJ's Diner was going out of business, to be replaced with — what else? — a Starbucks. Of course she'd fight it with all the fierce determination of an amazon, because she's Leslie Knope. And of course she'd lose said fight, because Pawnee is a godless town. Here's hoping she can get used to those gross breakfast sandwiches.

God knows if a Starbucks ever shows up in Twin Peaks it'll be the most warped, ominous, frightening Starbucks around. Yes, even more-so than the 24 hour Starbucks that you have to drive through the bad part of New Brunswick to get to. I feel like Dale Cooper, who likes his coffee black, has the integrity to stay away from the chain, but a post-Black-Lodge Dale Cooper? That's anyone's guess.

Springfield from The Simpsons

Let's see. The Simpsons is a postmodern animated reworking of the nuclear family living in Anytown, USA. So it's my conviction that Springfield would be totally fine if they sandwiched a Starbucks next to Moe's Tavern or across the street from the Kwik-E-Mart. I don't really expect Homer to be all, "Mmmm, pumpkin spice latte" anytime soon, but Lisa would THRIVE with a Barnes and Noble/Starbucks combo. I know this, because Lisa Simpson is me.

Wow, if an under-the-sea Starbucks ever popped up in Bikini Bottom the WHOLE dynamics of the Krusty Krab would be flipped around. Squidward would start showing up for work complacent and borderline chipper with a caramel macchiato in his tentacle. Mr. Krabs would introduce a Krusty Krabaccino, to make more sales. And as for Spongebob and Patrick? Who knows what destruction would unfold once their introduced to the wonders of caffeine.

Since coffee is practically a main character on the show — Lorelai and Rory are known addicts — there are so many different ways a Starbucks would upheave the town. Would Taylor Doose fiercely try to shut the operation, afraid the Stars Hollow would lose it's small town charm? Or would he embrace it, thinking it'll bring in more tourism? Would this impact the business at Luke's Diner? And most importantly, would Lorelai rally against the pretentious ornate concoctions of the chain, or embrace it, because at the end of the day, coffee is coffee. All I know is that this would warrant a season-length arc, and Kirk would definitely work there for an episode.

I don't think it drives Merlotte's — or Bellefluer's Bar and Grill, whatever it was by the series' end—out of business. I mean, there's only like 3 real establishments in Bon Temps. What I can imagine is that Eric and Pam, in their eternal entrepreneurial spirit, would push for a series of True Blood-infused drinks. This includes True Blood Cookie Crumble Frappucinos for vampires, and True Blood Soy Milk Low Fat Half-Whip Extra Chocolate Drizzle Frappucinos for asshole vampires.

More like this
At 28, Prue Leith Was In A Secret Affair & Sharing Apple Pie With Stoned Neighbors
By Grace Wehniainen
Everything To Know About 'Firefly Lane' Season 2 Part 2
By Gretchen Smail
Everything To Know About 'The Peripheral's Potential Season 2
By Brad Witter
The 'Firefly Lane' Book Ending Teases Way More Tears To Come In 2023
By K.W. Colyard
Get Even More From Bustle — Sign Up For The Newsletter