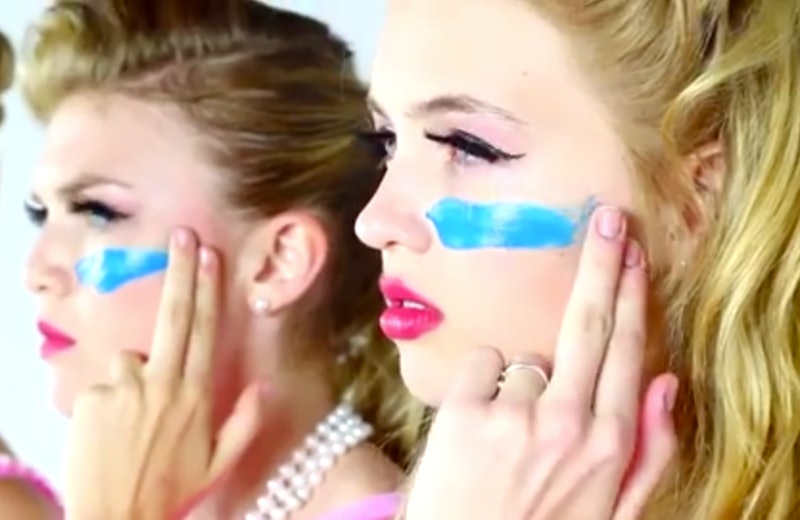 "Don't you think it's funny how they tell us how to live? Don't you think it's funny how we're all delinquent kids?" So asks Ben J. Pierce's phenomenal music video about gender roles. And while the quality of the lyrics, the melody, the concept, and the artful execution might lead you to believe that Pierce is a high-concept pop-art director, this creator is actually 15 years old.

The video, called "Little Game," depicts two groups: boys clad all in blue and surrounded by traditional hallmarks of masculinity, and girls dressed in pink, high heels, and makeup, surrounded by traditionally feminine staples. But when members of either group make even the most minute deviation from these blatant gender norms, the others turn on them, while lyrics like "Hush boy, hush boy, don't say a word. Throw on a jersey and no one gets hurt," play.

The video is visually dramatic, brilliantly filmed, and carries plenty of insightful messages about the ways in which rigid understandings of gender still dictate our behavior today. Because this stuff is pretty insidious. Though once you start noticing, it's everywhere.

Plus the song is so deliciously creepy and catchy, I'm probably going to be singing it all day.

Pierce, who wrote the song along with directing and producing the video, said that the idea for "Little Games" first came when a boy at school told him that if he presented as more masculine, he'd have an easier time in life.

"Of course I was rubbed wrong by that," Pierce told The Daily Dot, "and I went home and, in a very passive aggressive way, I wrote ‘Little Games.’ It began to grow into something else because the video concept kept coming up."

To make the video a reality, Pierce reached out to Tumi Mphahlele, with whom he'd collaborated before. The two of them together expanded on Pierce's original idea, mapping out the video and getting to work putting it together.

As might be expected from someone who's created such an incredible video at the age of 15, Pierce has been involved in creative pursuits for a long time. He has his own YouTube channel, separate from the one where "Little Games" is posted, called KidPOV where he posts other awesome video like "Why Boys Can't Wear Pink."

And if you, like me, can't get "Little Games" out of your head, you're in luck, because it's available on iTunes.

Down with patriarchy, up with cool music videos!

More like this
Starbucks’ Chocolate Cream Cold Brew Tastes Like This Retro Candy
By Emma Garza
How To Use Festify, A Spotify Plug-In
By Emma Carey
10 Eurovision Moments That Celebrate The Weird & Wonderful Camp Extravaganza
By Sam Ramsden
Love Of Huns' Definitive Guide To A Seminal BRIT Awards Moment
By El Hunt
Get Even More From Bustle — Sign Up For The Newsletter