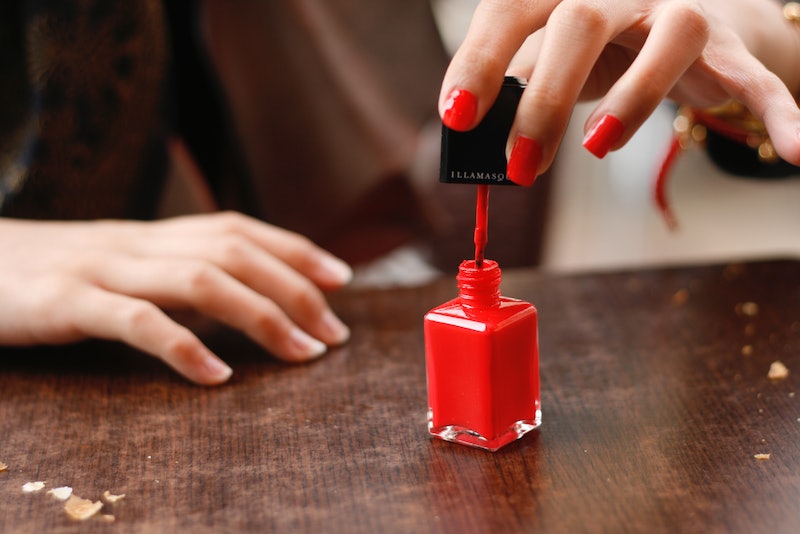 Something we all need to acknowledge: gender norms oppress everyone. Men, women, and possibly a few highly evolved cats (cats are people, too, guys, and they are secretly plotting a take over, just wait for it). Now I get as quickly bored as the next person by all those "But What About The Menz" arguments, and I think that the Men's Right's Movement falls somewhere between creationism and Holocaust deniers on the scale of logical arguments. But that doesn't mean guys don't face their own unique challenges when it comes to gender expression, and in a recent post on Medium, Jonathan Reed manages to sum this up beautifully.

It all started innocently enough with Reed making the choice to wear some red nail polish in public. But for one girl sitting across from him on the train, this choice was more than just a guy's innocent desire to put some pretty stuff on his fingers, and her violent rejection of this choice clearly upset Reed very profoundly. Recalling the incident later, Reed writes what he should have said to her instead of remaining silent.

“Hey,” I didn’t stand up and call after her, “you really want to know why I’m wearing nail polish?”

“The first time I wore red nail polish it was smeared on my fingers by a group of laughing kids in a small village in the Andean mountains. I paint it on when I’m feeling sad or lost as a visual reminder of a time that I was happy and fulfilled. It’s a piece of self-identity, and it gets me through hard days.”

“How dare you try to take that away from me,” I didn’t snarl.

Cheers to that! Because in my book, anyone should be allowed to express themselves however they choose, and screw the gender norms that might be violated in the process. If girls tend to prefer certain things, well so what? That means everybody is bound by the average? That's like saying that most kids today run more slowly than they used to and so no kids will be allowed to run quickly. No thank you.

The answer to that question is, of course, deliberately obvious: because we have assigned femaleness a position of implicit inferiority in all things. Which is ridiculous. When it comes right down to it, what exactly is weak about things like, say, the color pink? Or dresses? Or shampoo that smells like fruit? What exactly is weak about nail polish? It's a tiny film of color that goes over the now-totally-useless vestiges of claws from our evolutionary ancestors, and if Jonathan Reed or any other guy wants to wear it, they have every right to. Nail polish is about the only useful things human beings can do with their fingernails.

So what's the solution to the fact that we have basically oppressed women so much that it is actually oppressing men by extension? Well Reed has an idea about that, too:

When I wear nail polish, you know who asks me about it most often? Kids. Most of them already have some inkling that I shouldn’t be doing it and they are curious as hell. That’s how societal change begins — by breaking a few rules, teaching a few people that it’s okay to be different.

You can (and really should) read all of Reed's brief but awesome piece here.

More like this
Are Gemini & Capricorn Compatible In A Relationship?
By Kristine Fellizar
TikTok Is Using A ‘Love Island’ Sound To Expose Their Weird Crushes
By Courtney Young
The Case For A Hard Launch Summer
By Morgan Sullivan
What Is “Night Luxe?” Breaking Down TikTok’s New Aesthetic
By Courtney Young
Get Even More From Bustle — Sign Up For The Newsletter