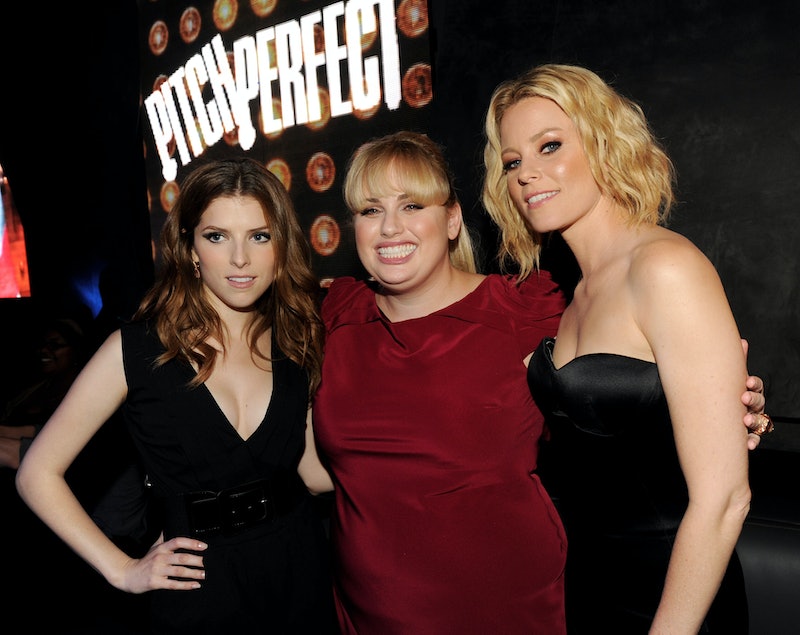 Once the first Pitch Perfect movie became the second-highest-grossing music comedy film of all time, fate was sealed: The Hollywood powers that be weren't about to let this one go by un-sequelized like School Of Rock. Not that you'd catch me complaining. Now, Pitch Perfect 2 is making its long, steady march towards theaters and reports indicate we'll actually be seeing our first trailer soon. So that begs the question: What's Pitch Perfect 2 actually going to be about?

The movie's due in theaters on May 15, 2015 — a date only two weeks after the second Avengers film is scheduled to crush the box office. We've already got a couple trailers for Age Of Ultron, so by that math we should be getting the Pitch Perfect 2 trailer any day now. So let's parse director Elizabeth Banks' words from an interview with Yahoo! to try to suss what that trailer might show us.

I won’t say anything about [the relationship between Jesse and Beca], but the girls are now graduating seniors. They’re coming to the end of their time as Bellas and figuring out how to sort of leave the next and the comfort of each other’s friendship and figure out what they’re going to do with the rest of their lives.

We already knew that this film would be taking place during Anna Kendricks' character's senior year, but it's nice to hear confirmation of what specific kind of coming of age story this sequel's interested in telling.

So what have we learned from this? Expect Pitch Perfect 2 to lead to one of those big, emotional graduation scenes in its final act. And don't discount those growing pains — there will likely be some bumps along the way as Beca, Amy, and the rest of the Bellas confront what it means to leave college behind.