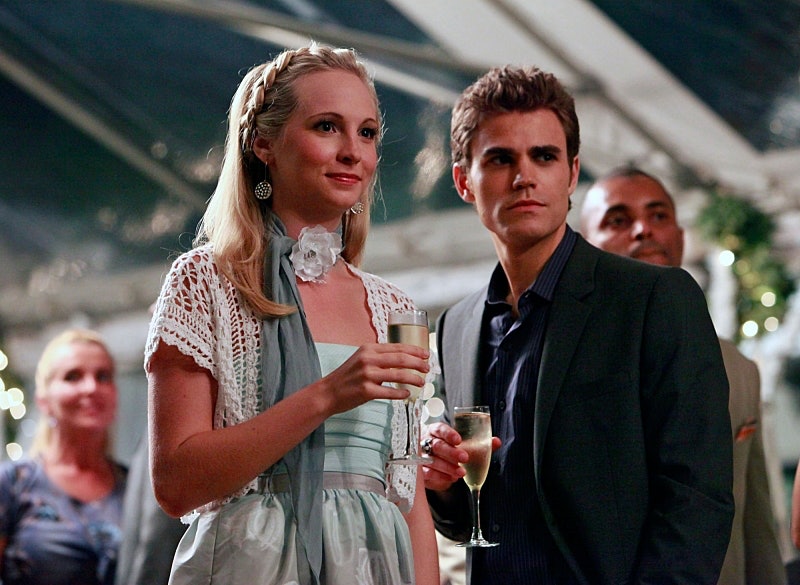 Let’s be totally honest here, The Vampire Diaries killed Steroline before Season 6 even happened. I mean, Julie Plec herself said that Steroline isn’t going to happen on TVD — so, as far as we’re all concerned, they’re already ruined. But there was always still a chance that Stefan and Caroline could continue being friends. Sure, Caroline all but professed her love to Stefan and he denied her, but they were great BFFs. And best friends, especially when they’re in extreme circumstances like TVD’s characters are, get through those kinds of awkward situations together. Well, The Vampire Diaries Season 6 isn’t even going to give these two a chance.

Things are totally screwed up between Stefan and Caroline at this point — actually, they were screwed up as soon as Season 6 started. And it’s all because, as it’s become abundantly clear this season, Stefan and Caroline have extremely different ways of dealing with the hard times this group’s had thrust upon them. Caroline wants to help everyone and talk about everything and Stefan just wants to run and hide and be rid of all of the dead weight from his past. Well, at least, that's where he was at before Damon returned during last Thursday's episode. But what does all of that have to do with Steroline and Season 6 essentially destroying any chance they had to be together?

Well, first of all, we have to look back to Season 5, which is where TVD initially planted the seed that would grow into the big wedge in Steroline’s friendship and/or romantic relationship. The series brought Stefan and Caroline together last season, had them bond, and made them TVD’s resident BFFs. And it all just happened so fast. I mean, Caroline naturally bonded with Stefan and Damon when she became a vampire many moons ago. But, all of a sudden, Stefan and Caroline went from commiserating about Elena's erratic decisions and annoying behavior to being full-on BFFs. They were all up in each other’s business all of the time, they had each other’s backs, and they seemed like the perfect partners-in-crime-turned-lovers. But that didn't happen by the end of Season 5 and then Julie Plec confirmed to E! Online that it wasn't going to happen. Ever. (OK, fine, she didn't say "ever," but it's definitely not happening in Season 6.)

What did happen was that Bonnie and Damon got zapped up with The Other Side and Stefan ran for the hills, even after Lexi told him that Caroline was so obviously in love with him. And then he didn’t call. So, what did Julie Plec do? She had Caroline call Stefan over and over again, leaving messages that he’d just delete, and separated them physically and emotionally from the friendship they spent the entirety of Season 5 building. But, now that Stefan's back AND Damon's back, so Stefan isn't going to try to cut his old life away anymore, doesn't that mean that Steroline could possibly have a chance? Unfortunately, I don't think so.

Season 6 already went too far in its early episodes — painting Caroline as a desperate, broken-hearted stalker — for this pair to ever go back to being where they were. And, I can honestly see it getting so much worse now that Damon is back. Stefan, naturally is going to try to push Elena to search for a way to get her memories back, while Caroline is probably going to stand by Elena's side because she was there to see her hit rock bottom before she made that life-changing decision. TVD's clearly going to stick Caroline and Stefan on opposite sides of this battle to get Delena together, which will just force Steroline even further apart than they already are. And it's going to hurt. Every single minute of it is going to be painful for Steroline fans to watch.

This was a 'ship built on an abundance of failed relationships and feelings of "never being the one." And TVD Season 6 is going to let Steroline crumble for the sake of Delena being endgame. If, of course, Delena is still the endgame. Considering the fact that Elena's not jumping back into Damon's arms, who knows what damage will be done to that 'ship as well. If you're a diehard Steroline fan, I'm going to suggest you get a Netflix subscription and just rewatch TVD Season 5 over and over because we're totally screwed in Season 6 and there's no silver lining whatsoever. And this might be as good as we're ever going to get:

More like this
Will Vampire In The Garden Get A Season 2? What To Know
By Kadin Burnett
Netflix Just Revealed When 'Never Have I Ever' Seasons 3 Will Premiere
By Gretchen Smail and Alyssa Lapid
'Unforgotten's Brand New Character Joins At A Pivotal Moment For S5
By Bustle UK
Will The Pentaverate Get A Season 2?
By Kadin Burnett
Get Even More From Bustle — Sign Up For The Newsletter